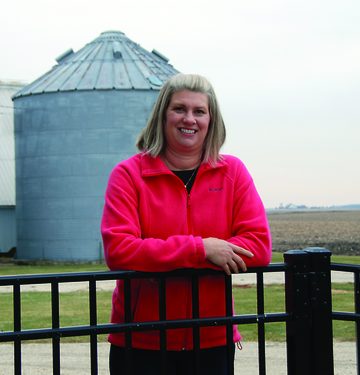 Farmers have a thing about weeds. They despise them, and rightfully so.

Now, for those of you not familiar with the wonderful world of weeds, let’s lay it out in layman’s terms.

There are dandelions and weeds that pop up in your yard, or maybe your garden. They’re annoying, but generally manageable.

And then there are field weeds. These can quickly grow to over five feet tall and they practically need their own zip code! Pulling these weeds by hand will make you break a serious sweat and you better have some tools in your arsenal.

There are weeds that look like flowers. These can be tricky.

There are flowers that kind of look like weeds to the untrained eye. Don’t pull those or you may upset someone in your life. Trust me, I know.

When I was a kid, or as our kids like to call it, the “olden days”, crop protectants didn’t exist. Weed control was done in great part by hand.

The task of “walking beans” was exactly that. Walking row-by-row and acre-by-acre, pulling weeds by hand from soybean fields. It was backbreaking, exhausting work, usually in hot and humid weather conditions.

When it comes to weed control today, you could say we have it easier than the previous generation.

Why do weeds matter so much? Well, weeds can choke out the crops our farmers have planted, wrapping their roots deep underground, stealing nutrients and moisture from the crops nearby.

Yes, weeds are kind of a big deal for farmers.

A few weeks ago, as we walked out of church, my husband suddenly veered to the left and walked directly into the landscape surrounding the structure. And then, in his nice church clothes, he began plucking out dozens of pretty, flowery looking green plants growing in the mulch.

People passing by did a double take. I weakly smiled and said, “Those aren’t flowers, they’re weeds. He doesn’t like weeds.”

Then, like any good wife would do, I loudly whispered, are you sure those are weeds? You’re not pulling flowers are you?”

He paused and gave me the look – you know, THE look. He continued to pull the weeds until each and every one of them vanished from the plot.

The priest watched from a distance looking amused. He didn’t bat an eye as his parishioners walked away carrying an armful of weeds from the church.

So when my husband called me one morning and asked me to pull some weeds from a nearby field, I took it as a compliment. With my trusty hoe, I set off on my task to free the corn from thistle roots that were just as tall as me. After some serious sweat and bonus steps on my Fitbit, my mission was accomplished.

When I arrived back at home, our four-year-old, Eleanor, asked where I had been. I told her I had been pulling weeds. She said, “I like pulling weeds, because they just grow back and you can pull them again.” Well, I suppose that’s one way to look at it!

Until we meet again, weeds.