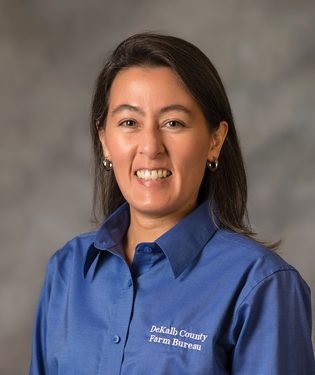 I was planning for an educator workshop titled, “Thinking Critically about Food, Farming, and Sustainability.” I had a vague notion we could explore how our food choices connect to what happens on farms, and how to critically evaluate sources of information about food.

The workshop date grew near and it was time to shape my vague idea into an actual program. I stared out my office window, thinking deeply about my workshop theme. I crafted objectives. I pondered activities. Then I hit a mental roadblock. In a state of mild panic, I dropped in at Sycamore High School after school one day to pick the brain of a science teacher who serves on our Ag Literacy Committee.

I would start by handing out food packages so we could identify and analyze label statements and their implied claims. We could discuss food-related claims in advertising, in the media, and on social media. We could compare what packaging leads us to believe about our food with information about what actually happens on farms.

As I further explored the C.E.R. (claim, evidence, reasoning) strategy of critical thinking, I learned how logical fallacies and biases interfere with our ability to evaluate evidence and reason objectively. I discovered that the pervasive “natural” claims I’ve written about in the past lure us into a fallacy known as Appeal to Nature – the assumption that natural things are better, safer, and more desirable than artificial. I learned that there are dozens of such fallacies, and several different kinds of biases, as well.

My sixth and seventh presentations of the “Thinking Critically” workshop will take place during the National Ag in the Classroom Conference this summer. Each time I conduct the workshop, I tweak it – hopefully for the better. As I think and rethink my approach, I’ve identified my “favorite” fallacies and biases: the ones I notice most often in discourse, and possibly the ones to which I’m most susceptible.

Next to Appeal to Nature, anecdotal is another pet fallacy of mine. Also referred to as anecdotal evidence, this fallacy involves using limited examples or personal experience to dismiss factual evidence. “My uncle smoked two packs a day and lived into his 90s, so I don’t buy all the lung cancer scare tactics,” is a classic example. Here are others you may recognize:

Logical fallacies
(as described at YourLogicalFallacyIs.com)

Biases
(as described at YourBias.Is)

Of course, critical thinking should apply to far more than our decisions about food purchases. It should influence how we behave, communicate, live, and vote.

So the next time you are taking in information on anything of consequence, pause. First, how is this information making you feel? Indignant? Angry? Fearful? Righteous? Jubilant? The stronger your emotional reaction, the more important it is to step back and think critically. What’s the claim? What’s the evidence? What’s your reasoning for how you feel, and which logical fallacies or biases are you falling prey to?

Wish me luck on my workshop!