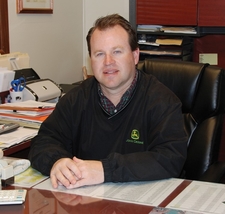 The 2019 growing season was unprecedented in terms of the number of prevent plant acres and late planted crops. About 50,000 acres in DeKalb County were not planted in 2019. Most of the corn and soybeans were planted in early June.

The central part of DeKalb County had the highest levels of prevent planting. Some farms in that area were not able to plant any corn. There was some corn planted in late April and some parts of the county were able to plant in marginal conditions one day in mid-May.

The frustration of continuous rainfall and delayed planting or prevented planting made 2019 a year most farmers would like to forget.

Some of the corn and soybeans that were planted late produced surprising good yields while others were disappointingly low and with higher moisture levels. Many acres of soybeans were harvested at moisture levels well above typical harvest levels.

DeKalb County soybean yields were 59 and 56 for FBFM and NASS-USDA averages, respectively.

DeKalb County wheat yields were 85 and 57 for FBFM and NASS-USDA averages, respectively.

The unplanted acres, the decline in yields, along with sharply higher drying costs reduced farm earnings to their lowest levels in several years. Labor and Management Income declined to -$21,688 for DeKalb County FBFM farms in 2019.

Crop input costs among Northern Illinois FBFM farms were largely unchanged in 2019 at $231 per acre.

Recent global instability has pushed virtually all agricultural commodity prices lower. Unless grain prices move sharply higher, crop yields in 2020 will have to be near record levels in order to avoid another decline in earnings.

In 2020, weather permitting, farmers will plant an average of 216,000 acres of corn in DeKalb County.

Soybean acres weren’t compromised last year mainly because soybeans can be planted later and still produce an average crop. The wet season pushed soybean planting well into June in 2019. This year, an estimated 118,000 acres of soybeans will be planted in DeKalb County.