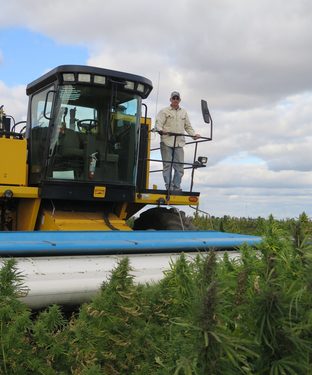 Move over corn and soybeans, make room for the new crop of hemp in DeKalb County fields.

Farmers that grew hemp in DeKalb County this year were betting on a better profit than their traditional crops that have taken a hit from trade wars and low prices.

“I was looking for a third crop, to complement corn and beans,” said new hemp grower Steve Drendel. “It’s a shorter season crop so I could plant it later (after corn/beans) and harvest it sooner.” So he thought. 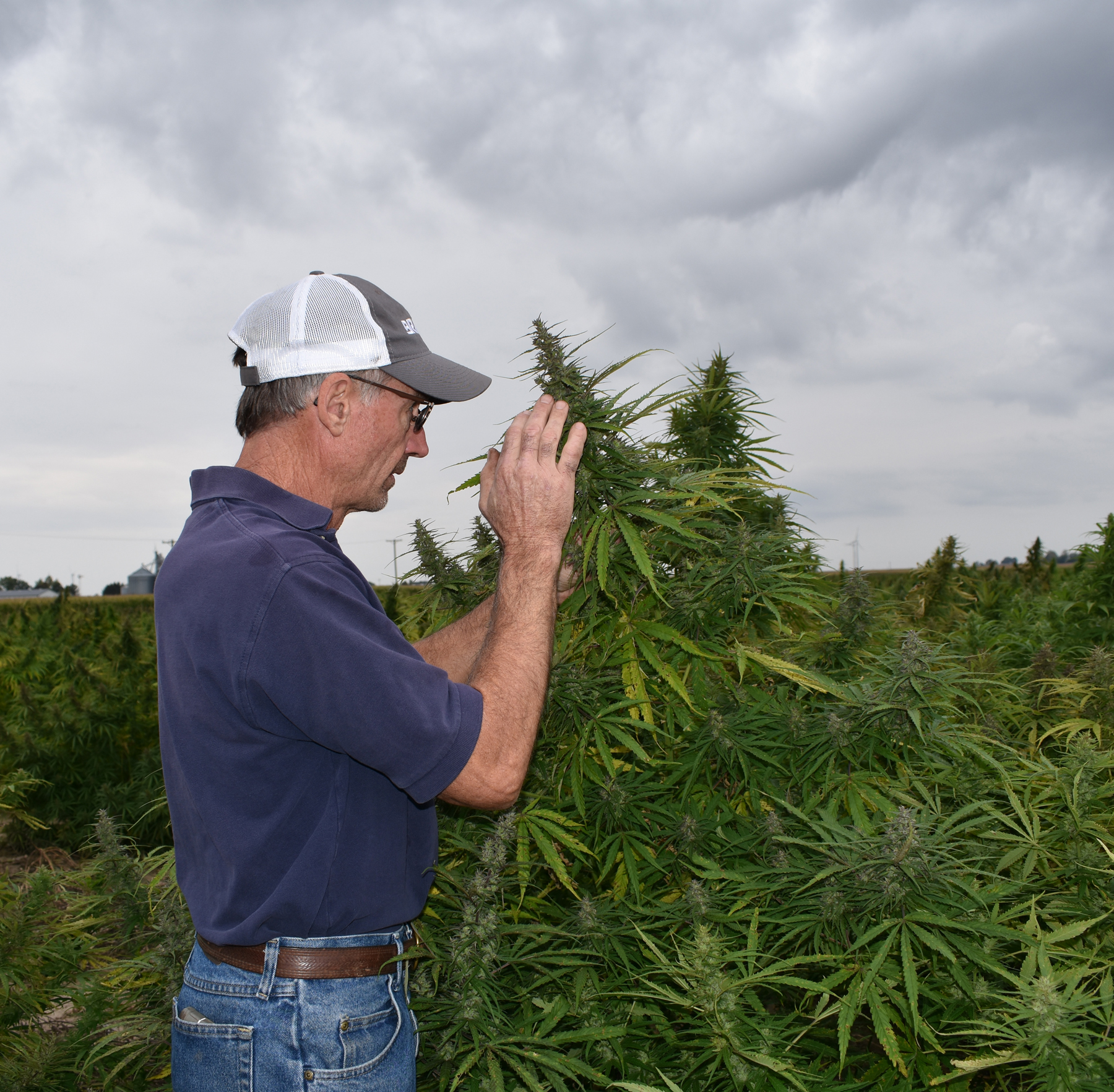 Steve Drendel takes a closer look at the crystals in the buds of the CBD hemp growing on his farm. He regularly checked and tested hemp to figure out the peak time to harvest hemp.

But weather played havoc with all his crops this year with a wet spring planting season and now a wet fall harvest.

Drendel has been fighting the weather to get his industrial hemp, abundant in CBD (cannabidiol), harvested. Timing is crucial based on getting the cannabis plants out during optimal levels of CBD.

“Being a rookie at this, I would watch the crystals increase in the buds and figure out the peak time to harvest hemp,” he said.

Drendel had hoped to start hemp harvest in September but instead it was October and then continued into November.

His goal was to get 10-12 percent CBD concentration – he got 5-6 percent. His less than ideal outcome of the cannabis compound was due to male pollinated plants intermixing with the female plants. Male plants had to be hand removed from the field to avoid cross pollination and avoid a diminished amount of CBD in the female plants.

Drendel explained that the CBD seed he purchased contained both female and male seeds from Colorado. This was the most cost effective seed selection option, but the hemp grower now thinks that purchasing pure female seeds might have been better in the long run. 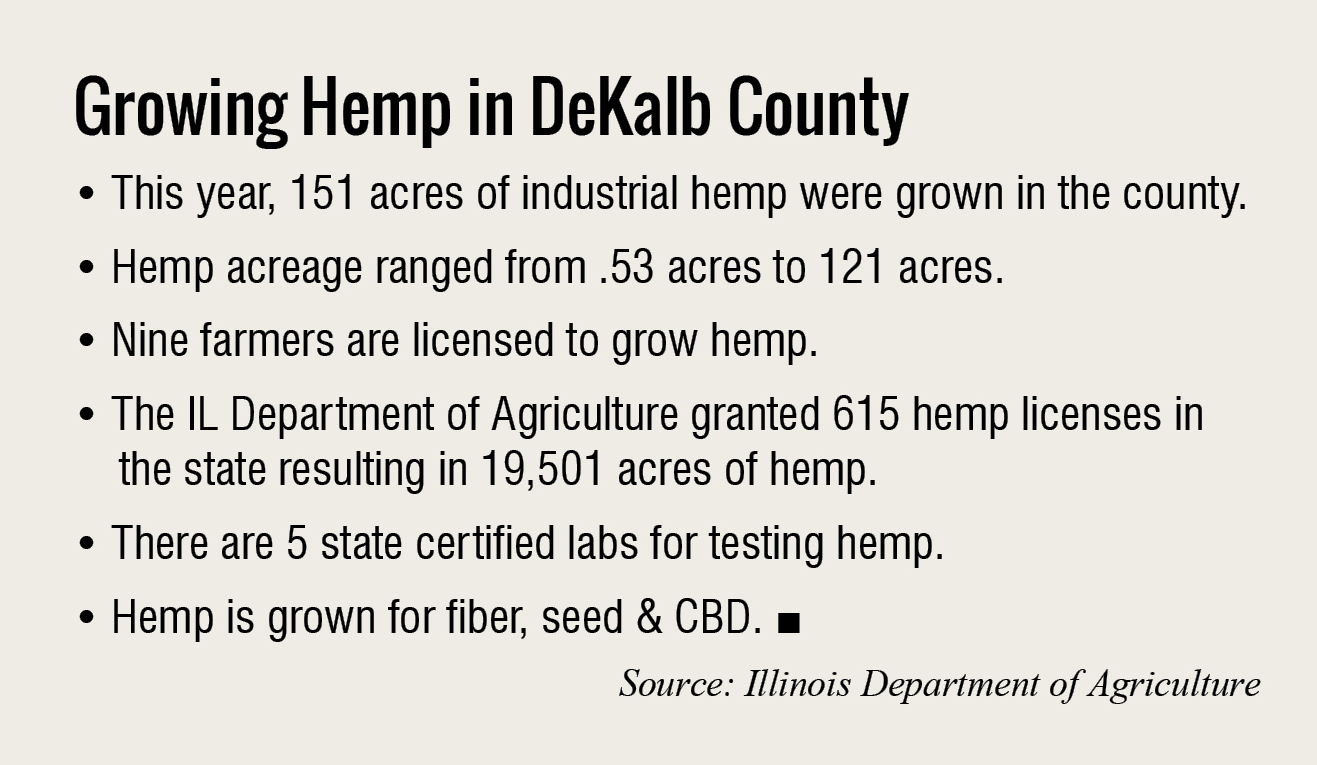 Steve Drendel is one of nine farmers growing hemp in the county. He is one of the county’s largest hemp growers and is licensed with the Illinois Department of Agriculture. Most of his hemp acres are near his home farm in rural Malta.

Steve Drendel planted hemp seeds with a six-row corn planter in late June and four months later harvested the CBD hemp with a variety of equipment. He was forced to use different mechanical harvest solutions based on wet weather conditions.

“It was a slow process due to weather,” said Drendel. “I had to be flexible and adapt for an untimely harvest.”

His four harvest solutions involved first stripping plants with a seed corn picker to remove the tops of the plant and leaves and leave the stems in the field. The next group of plants were stripped and fed through a stationary combine to remove stems (to save time hand sorting). Some of the hemp plants were hand cut. And finally, a portion of the plants were chopped and baled into large round bales. 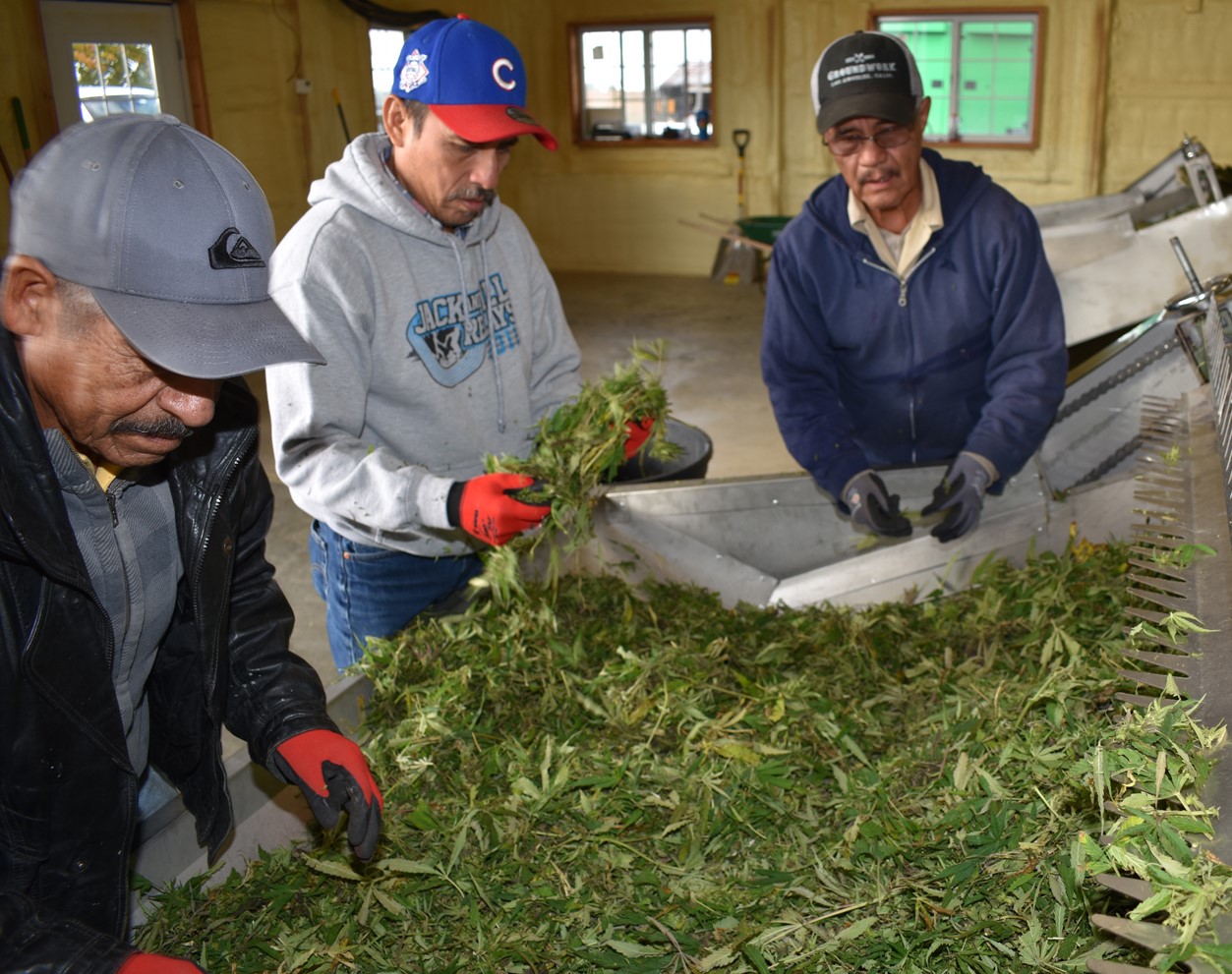 The stripped and chopped hemp plants were delivered to the drying facility. The round bales were encased in white plastic and stored indoors until they can be dried and processed.

“There were challenges with mechanical means of harvest to drying,” stated Drendel.

Once the hemp plants were harvested they were transported to a drying facility located in rural Paw Paw. The facility contains two large commercial grain dryers.

Before the cannabis plant can be dried, workers hand sort the hemp to remove any stalks or stems. Also, any male seeds that weren’t previously destroyed had to be removed. 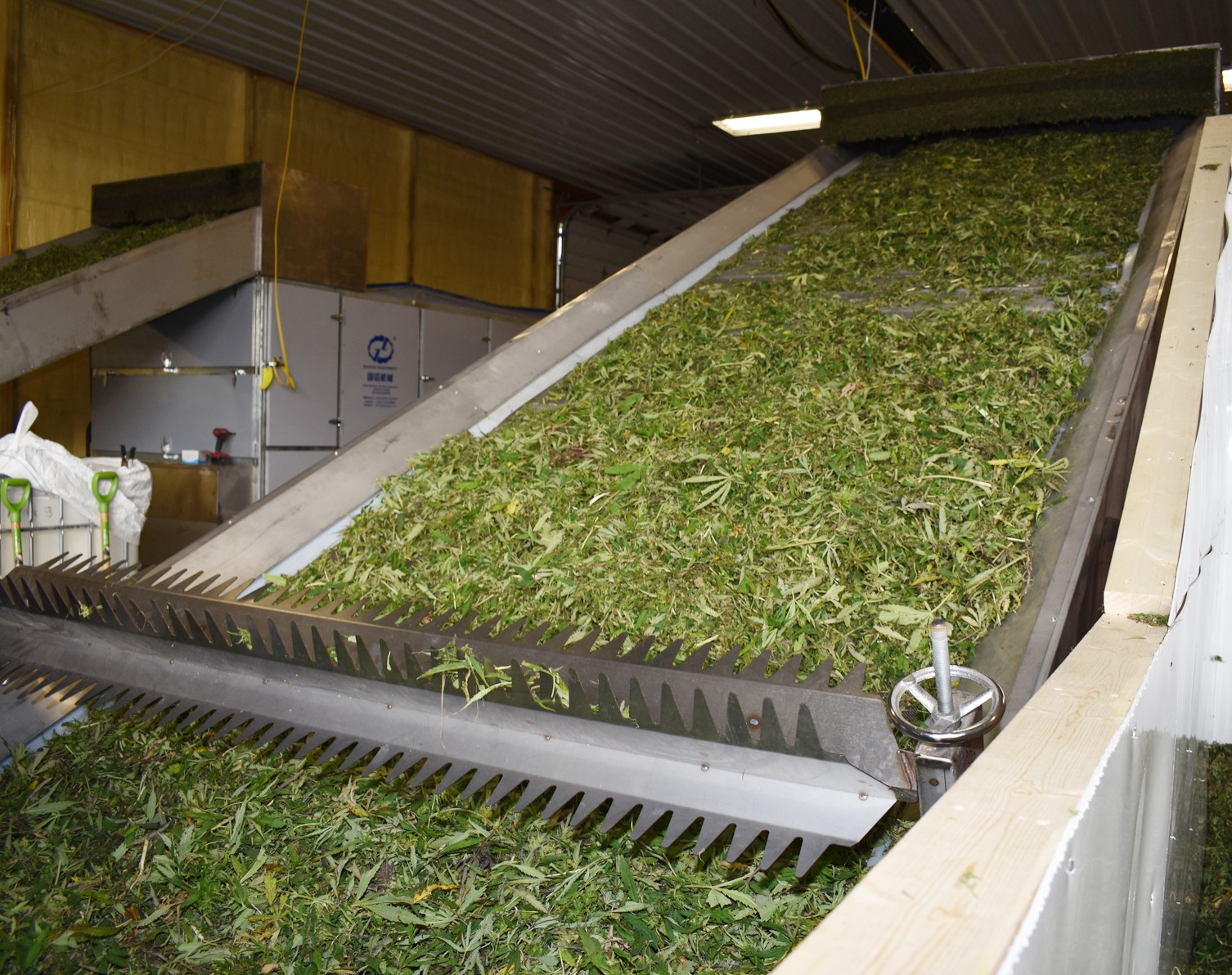 The conveyer feeds the hemp into the large, commercial dryer to bring down moisture levels in preparation for extraction of CBD oil.

“Growing hemp is labor intensive,” said Drendel. “For one day of weeding in the fields we employed about 56 people.”

The harvested green plants came out of the field with moisture levels around 60-70 percent and needed to be dried to 10-12 percent.

At the drying facility they test moisture levels of the biomass, and monitor the mechanics of the two dryers. Typically it takes a couple of hours to dry batches of hemp contingent on moisture and volume.

Before harvest, Steve Drendel took several tissue samples and sent them off to a certified state lab to be tested. The tests indicated threshold levels of CBD and THC (tetrahydrocannabinol). THC levels in industrial hemp have to be 0.3% or less. If it exceeds this level plants must be destroyed. 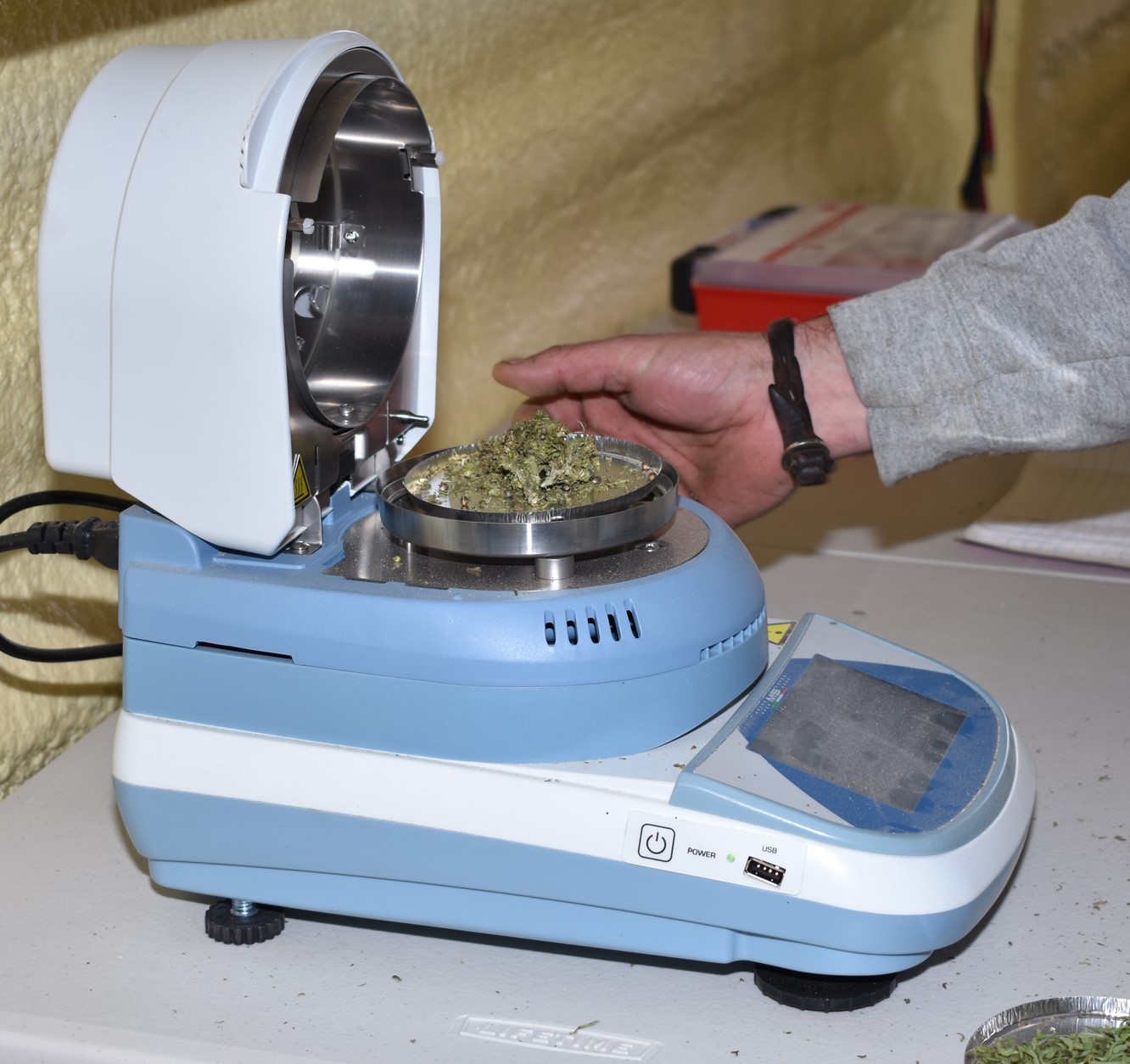 Hemp samples were taken frequently to test moisture levels. CBD hemp was harvested at 60 percent and dried to 10 percent moisture.

Their hemp acres averaged about 1,000 pounds of biomass per acre, which was dried and then taken to the extraction center.

The dried hemp is transported to an extraction center in DeKalb. There, biomass fills two large cylinders and with high pressure and CO2 the CBD byproduct is extracted. It takes about two hours per cylinder for the extraction process.

The hemp extraction byproduct is crude, a pasty-looking substance. From there the crude is taken to an energy lab to refine and distill into CBD oil.

CBD is a hot commodity infused into everything from medicines to cosmetics and animal treats. CBD oil is popular because it’s used to help with inflammation, insomnia, stress and other ailments. 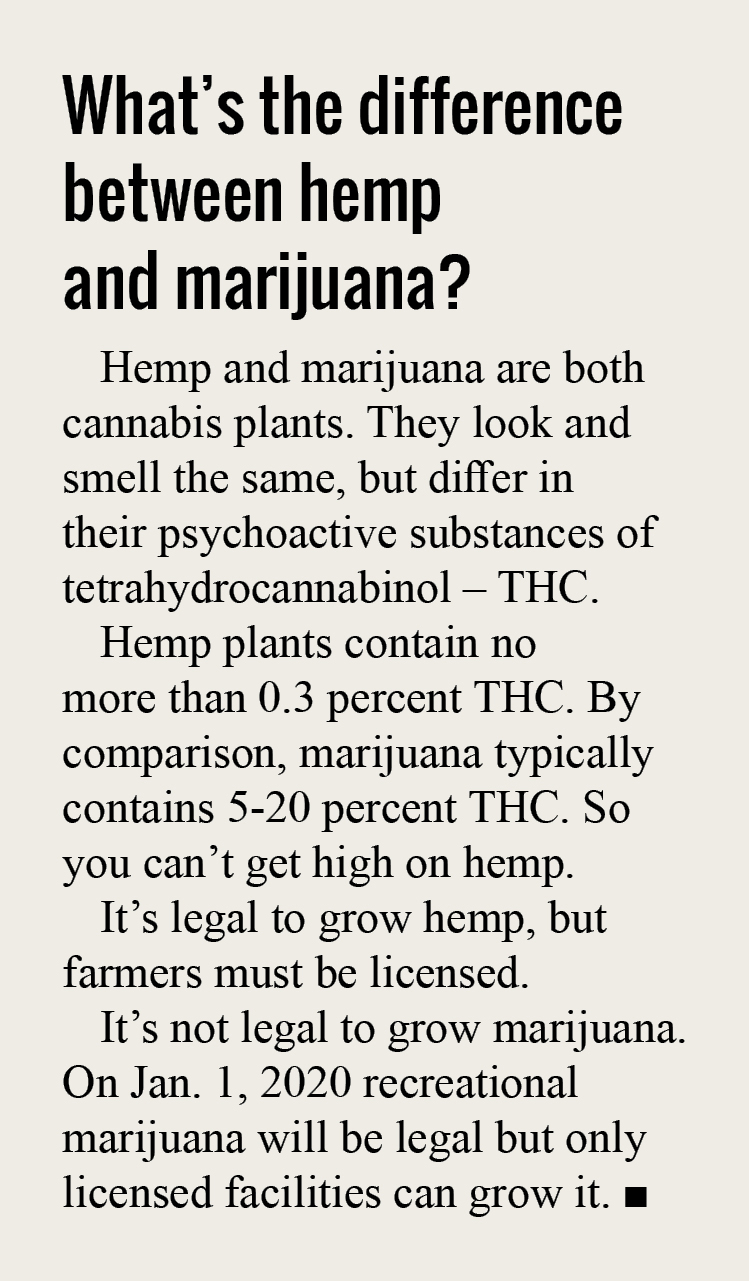 Steve Drendel saw the opportunity to grow CBD hemp after it was legalized and rules were finalized in the spring of 2019. He conferred with a consultant who had experience growing hemp and partnered with CBD Farm Solutions, a group of investors.

“It was sort of a whirlwind how it transpired,” said Drendel. “I worked with a consultant to put together a good team, solve solutions and be sustainable.” 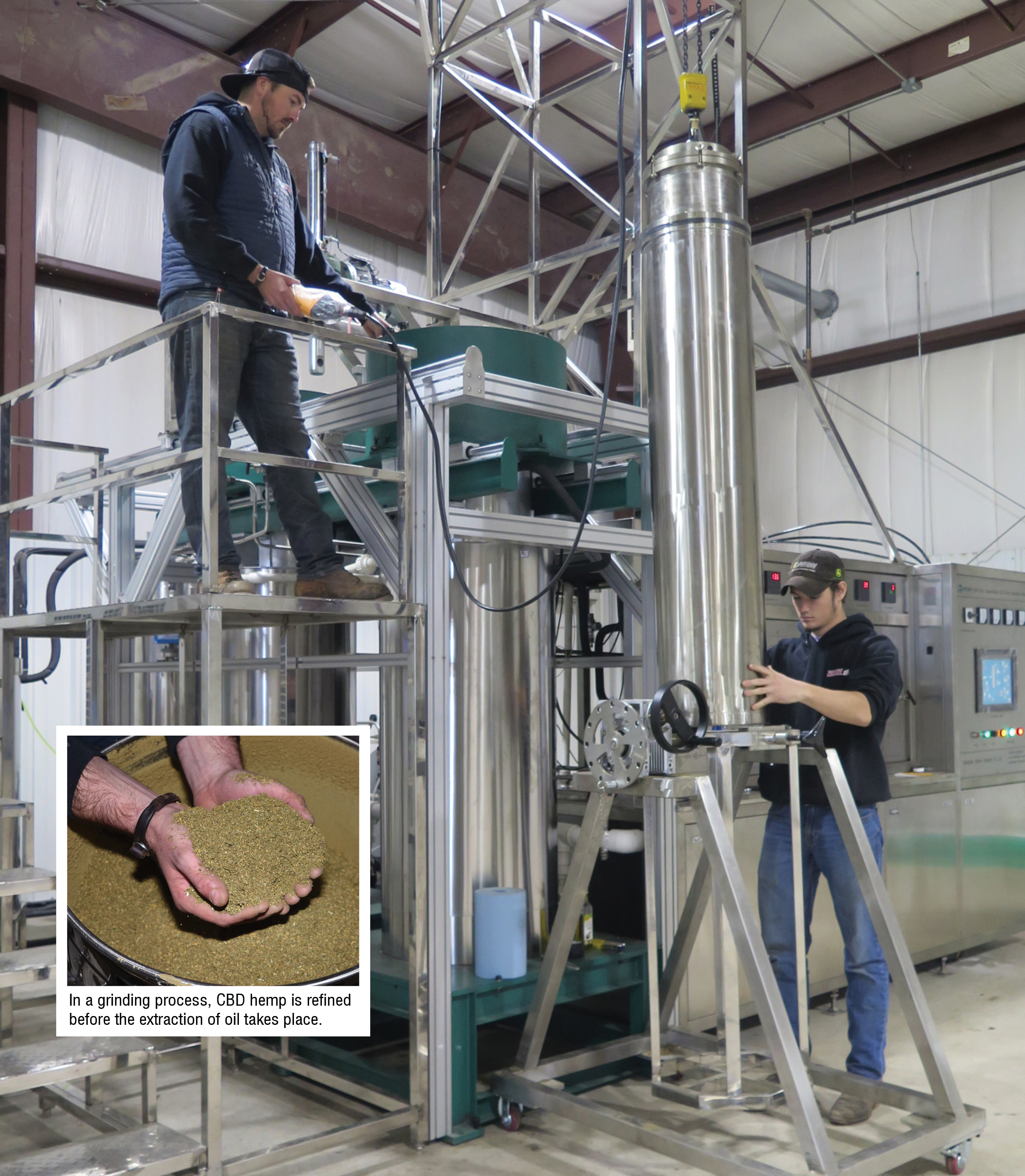 Dave Doody, one of three partners with CBD Farm Solutions, said, “We hired people with expertise to get facilities up and running. DeKalb County has great soils and highly experienced farmers.”

Drendel has a contract with CBD Farm Solutions to grow, harvest and deliver CBD hemp. The company employs people to run the drying and extraction equipment and then delivers the byproduct to their lab for purifying into CBD oil and finally markets the oil.

“Growing hemp was more work than expected,” stated Drendel. “I was constantly identifying issues and finding solutions. It’s not for the faint at heart.”

The first year was a learning curve for Drendel, even though he has been growing corn and soybeans for 38 years. He’s convinced hemp should be a segmented market – for larger acres with mechanical harvesting and for smaller acres with hand harvesting. 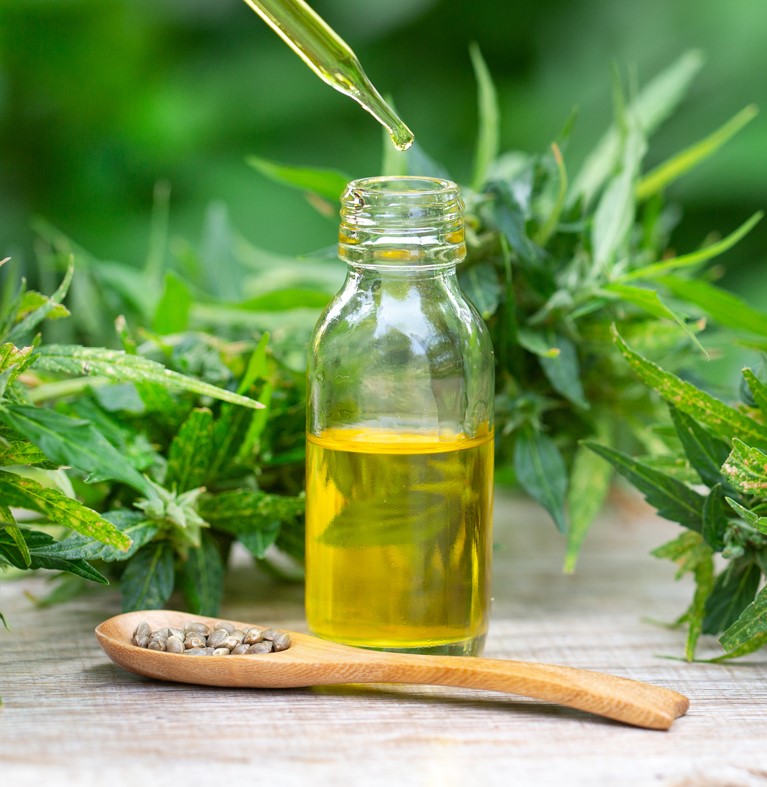 CBD Oil is a hot commodity used in medicines to help with stress, anxiety, acne, heart health, diabetes, and certain types of cancer.

“The markets need to reflect these types of farming. The larger hemp acres sacrifice CBD concentrations with mechanical operations versus smaller acres which can control CBD levels harvesting by hand.”

Drendel says it was helpful for him to build relationships with other successful hemp growers and find trustworthy resources with this risky crop.

Pertaining to market saturation, he’s a little bit concerned that in the future prices may not hold up based on the big surge in hemp production. “Time will tell,” Drendel said.

As for next year? He’s still not sure. He may downsize his hemp acres and seek a more manageable premium market. In the meantime he’s harvesting his field corn.