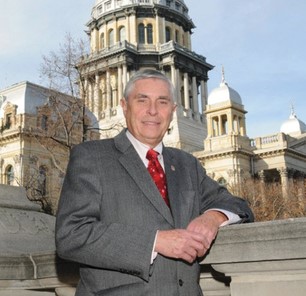 Rep. Bob Pritchard was a “natural” at communicating with his constituents.

“It was a privilege to be a voice for this area and listen to the people I was representing,” said Rep. Bob Pritchard of the 70th House District. “Then, I would communicate what was going on in Springfield.”

For the last 15 years, Rep. Pritchard was inherently driven to research issues and find solutions for the benefit of the people he served. His continual presence at so many community events helped him maintain a pulse of what was important to local people.

“I like to deal with issues and do research on issues,” stated Pritchard. “Part of that research is getting out and seeing what people think. It’s a continuum of the role of a legislator and personal philosophy of being engaged and trying to help and serve and pay for this space I take on this planet.”

As a state legislator, he was a proponent of education, supporting the new school funding reform adopted last year. “It’s an issue of funding education adequately and equitably,” said Pritchard, a cosponsor of the Education Bill. “New dollars are now coming from the state for education. Long-term the state will pick up its share of responsibilities with some property tax relief expected.” 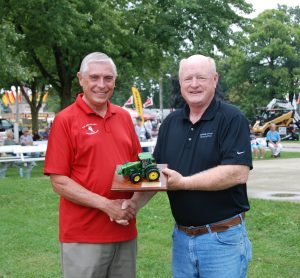 Pritchard has sponsored a number of bills for many walks of life including veterans, military, senior citizens, farmers, teachers, firemen, social service providers, and conservationists. Intuitively, he supports people and causes which he believes are worthy.

Earlier this year he voted for a balanced budget which required an increase in income taxes, from 3.75 to 5 percent. He asked himself, “If I don’t support it where will our state be? What about non-profits? Schools? We needed more revenue and at the same time we made cuts to make the budget balanced.”  Pritchard knew that his vote was a bipartisan move needed to propel the state forward.

Pritchard was also a friend of agriculture in the General Assembly, being one of a few legislators who had a farm connection. His son, Greg, farms the family farmland of which Bob is one of four families in the operation.

Formerly, Bob graduated from the University of Illinois with a degree in agricultural communications and returned to the family farm when his father passed away. His ag careers have included broadcasting, Extension, and finally communications for DeKalb Ag/Monsanto where he retired after 23 years. 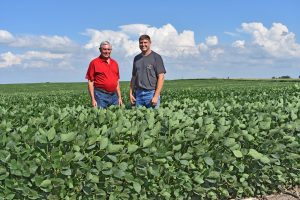 The Pritchard family has been farming for 169 years. Bob is the sixth generation and his son, Greg, is the seventh generation of family farmers who grow soybeans and corn in rural Hinckley. When Bob was elected to the state legislature in 2003, Greg assumed the farm operator role.

Not only did his career choices help him as a state representative, his community service leadership did as well. He served on the DeKalb County Board and the DeKalb County Farm Bureau Board, and took on leadership roles in each of these organizations. Pritchard also remains involved in the Hinckley community, particularly in his church and the Historical Society.

Last year Rep. Pritchard decided he would not run for re-election. He had intended to complete his term the end of 2018 until the Governor appointed him to fill a vacancy on the NIU Board of Trustees, effective in July. During his legislative years he had set policies for higher education and now his new role will be implementing policies at the university as a trustee.

He humbly notes that he has been honored by various groups for his legislative initiatives. Some of the special awards he received include the Friend of the Children award from 4C, the John Roberts Kishwaukee College Service award, the Outstanding Legislator award from the Illinois Association of Chambers of Commerce, and the Friend of Agriculture award from Illinois Farm Bureau. 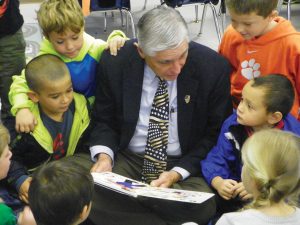 As a state legislator, Bob Pritchard was a proponent of education, supporting school funding reform, and cosponsoring the Education Bill. He was recognized locally with the Friend of Children award from 4C, which he was especially honored to receive.

The 73-year-old looks back on his political career with three different governors and turnover among 118 in the House of Representatives.  He’s already missing the information loop and of course his friends. “I won’t miss the politics, but I will miss the opportunity to be the voice for change,” said Pritchard. “It’s time for fresh eyes and energy to represent the district.”

DeKalb County Farm Bureau would like to take this opportunity to thank Rep. Pritchard for his work in the state legislature, accessibility, and perpetual relationship with the Farm Bureau organization.