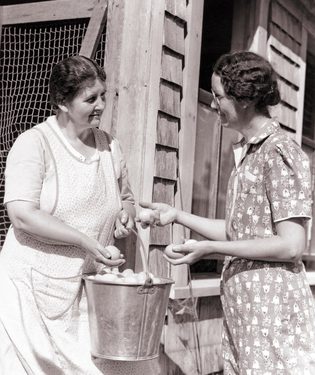 While men generally handled a majority of the fieldwork women traditionally kept the household going. Women typically grew the gardens. They canned produce, baked bread, did the laundry and cared for the family and home.

Women and children usually raised the chickens: gathering the eggs, nurturing baby chicks, and dressing the fryers. The money they earned by selling eggs helped to pay for household items and provided additional income for the farm family.

In the 1920s, farm women would get between 25 cents to 47 cents per dozen of eggs sold in town. That compares to fluctuating egg prices today from $1 to $2 per dozen.

A century ago farm families produced most all of their own food such as meat, eggs, milk, fruits and vegetables.