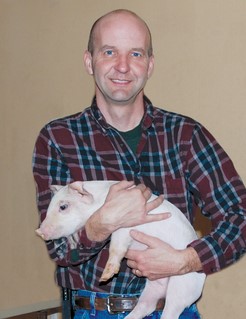 Answer: African Swine Fever is a disease that originated in Africa and now has infected pigs in China. With protocols in place here, it is my hope that it doesn’t reach the United States.

African Swine Fever (ASF) is a swine disease virus that has been around for decades. First in Africa and now in China and neighboring Asian countries.

Of all the diseases a hog can contract, this is without a doubt the worse one. Mortality in swine that are infected is extremely high and many times can wipe out the whole herd. There is no vaccine and no cure.

But, humans and other species can carry the virus. If humans come in contact with ASF they could spread it to unaffected pigs. Some of the viruses that pigs can catch will die off after being without a host for a couple of days or after exposure to high temperatures. This virus has a rather long shelf life.

ASF has been found to be able to survive for many months without a host and even longer in cooler conditions. Foreign travelers who have had contact with infected swine or bring meat from countries with ASF could bring the virus here. This is why proper bio-security and vigilant inspections at ports and customs is so important.

Since this virus can survive for such a long time, it gives it more of a chance to spread. Feral hogs (wild pigs) can succumb to disease, but before dying from it, they can pass this on to other wildlife and other pigs as well.

While some of the pork production in China is modern like we have here, much of the production is on a small scale (5-10 animals) and pigs are raised outside where they have contact with wildlife and other feral hogs. This makes controlling the disease almost impossible.

Pigs that are infected do not show symptoms right away, but can still spread the disease. Depending on many factors, some pigs may not show signs of having ASF for up to 21 days. Signs of ASF include purple ears, not eating, diarrhea, skin discoloration and of course a fever.

We do not want this disease here in North America and so far it is only present in Asia, Europe, and Africa. While meat from infected swine is totally safe to eat, it carries the virus and that is why countries that have cases of ASF cannot export any pork products.

There are several efforts being made to make a vaccine, but the ASF virus is a very complicated virus and will likely take many years to develop one.

The economic fallout from ASF making it to the United States and North America would be disastrous not only for pork producers, but for many others in the industry as well.

I can only imagine what a farmer with an infected herd must go through knowing that no matter how hard you work or no matter what you do, all of your pigs are going to die. And hopefully, imagining is all I will have to do.

Click the image below to learn more about ASF.

Got a question for a farmer?
Submit your farm and food questions to connections@dekalbfarmbureau.org. We will share questions with our local farmers and publish their answers as space allows in upcoming issues of CONNECTIONS.