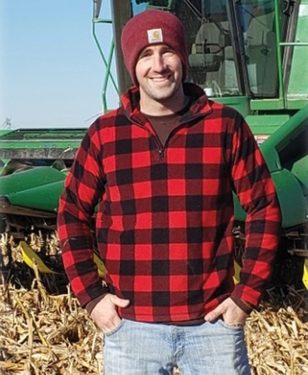 This article was going to be on what a normal year in farming looks like but as I sat here staring at the blank screen for what seemed to be an eternity I came to the conclusion that there is no “normal” in farming – at least not here of late.

In the beginning of each year we farmers try to predict the future. We calculate our input costs (rent, seed, fertilizer, chemical, etc.) and take our best guess at what yields will be and how much we can sell our crop for. We need to do this in order to figure our break-even amount – the minimum amount we have to make to cover our expenses; but regardless of how much number crunching we do we still cannot predict the future because “normal” seldom is.

In 2018 we had a “normal year” for the majority of the growing season until we were hit with tar spot, a disease that we have never seen before. This disease hit the majority of our area and killed plants off before they were able to fully mature.

Last year was as far as you can get from a normal year. Most guys didn’t finish planting until June and some not until July. A record number of acres didn’t get planted due to conditions being too wet for too long and were recorded as “prevented plant.” Once harvest eventually came around the grain still had an extremely high amount of moisture. We had to run a lot of our corn through the grain dryer twice and it still had too much moisture and the quality of the grain was poor. We weren’t able to finish combining soybeans until Nov. 9 and corn Dec. 14.

This year, other than the record-breaking amount of replanting we had to do (because of the fields flooding), it seemed to be a “normal” year. We finished planting (the first time around) May 12. The weather was relatively cooperative after planting and as we neared autumn our crops looked promising. Then August hit and the rain shut off, putting stress on corn and soybeans alike, reducing yield for both. August is typically the ‘grain fill’ period in corn and not having that rain hurt us. It especially hurt any corn fields that were also corn the previous year.

This year I saw a field that typically yields 215 bushels per acre or better finish at just over 150 bushels – roughly a 30% reduction in yield. This is a tough blow for a guy to take when he’s projecting to have a “normal” year of 215+ bushels; and although we saw a nice rally in commodity prices a 65 bushel difference will still break the bank. Luckily, not all fields throughout the countryside saw this kind of deficit – corn fields that were planted as soybeans last year seemed to do well enough. A normal year of farming to me means starting to plant by mid-April and finishing before May’s end. Harvest would be complete by Thanksgiving with corn yielding 200 bushels per acre or better and soybeans at least 55. However, it’s been some time since we’ve seen a normal year of farming – so, tell me, is it really normal?