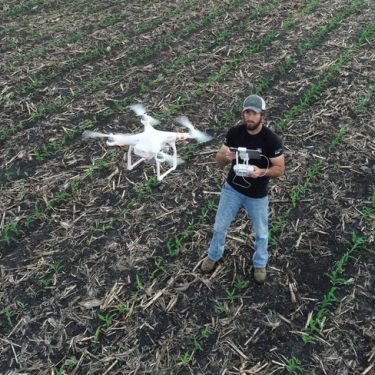 Farmers go hard. They work around the clock to ensure their crop gets in the ground.

But as you well know, weather is a factor and if there’s a large amount of rain the planter will need to be parked until the ground dries back up. Such was the case this spring when we received three inches of rain in a matter of a couple hours and then another three inches over the next day, and then some.

Luckily, by that point most farmers had the majority of their seed in the ground, but they were left wondering if that seed would still grow with all the water standing in their fields.

When the fields dried up enough to venture into guys jumped on their ATVs and drove their fields to determine which areas would need to be re-planted. But sometimes it’s hard to see what the entire field looks like when your boots are on the ground. This is where the drones come into play.

Drones have been in agriculture for a while now. They can be used simply to fly over a field to gain an overview (pun intended) of what the field looks like or they can be used for more in-depth practices such as collecting hundreds of standard RGB images, stitching them into an orthomosaic, and converting that orthomosaic into a VARI format. This gives us a crop health analysis – showing exactly where the stressed areas are in the field.

Regardless, the uses for drones in agriculture are ever evolving, and the newest way drones are being used is to create reports that tell farmers which parts of their fields need to be replanted and which areas are fine.

This is a brand new technology that hasn’t been widely adapted yet, but it’s an incredibly useful tool in the agriculture toolbox and is one I used almost all day every day for the last week of May trying to help our customers make replant decisions.

The way it works is I pull up to a field and, using an iPad, mark out the boundaries of the field I want the drone to fly and how often I want it to take pictures, which is typically in 2-3 acre grids. Once the settings are in place I upload the plan to the drone and it takes off to fly the field on its own, following the pre-established route and being closely monitored by me. When the drone is finished flying it comes back and lands exactly where it took off from and generates a report…and this is where the magic happens.

The app on the iPad looks at each picture the drone took individually and puts a little plus (+) sign on every single plant it sees and a yellow rectangle around areas missing plants. When all the plants have been counted the app pins that number along with the associated picture to the area of the field that the picture was taken. After this has been done with all the pictures, a report is generated that I can then send to the farmer. Drone technology is ever-developing and is seldom perfect. So after the field is flown it is good practice to grab the iPad, put those boots on the ground and head out to the areas that appear to be having trouble to verify what the drone is saying.