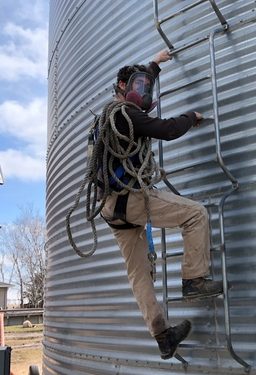 Ever since I was a kid I was taught about grain bin safety. I was warned of how dangerous it is to climb inside and walk around while grain is stored. Today working with grain bins is a regular part of what I do as a farmer but the words of caution preached to me all those years growing up have never been overstated.

A grain bin is a large, cylindrical, metal building used for storing grain. A farmer will store grain in the bin until he’s ready to haul it to market. The price of grain typically isn’t optimal during harvest time so a farmer can store his grain in a bin for a few months in hopes of selling it for a higher price down the road.

Every year has its own trials and in 2019 those struggles were only amplified. You see, grain quality is a HUGE factor when it comes to storing grain and 2019 was not a pretty year for grain quality. It was an incredibly wet year from the start so farmers were delayed in getting their crop planted.

When it was time to harvest we combined high moisture corn. It was run through a grain dryer, dried down to the ideal moisture level and moved into a grain bin through a center hole in the roof of the bin. As the corn enters the bin and begins to build up the whole kernels will trickle to the outer edges of the bin and the fines will stay put in the center. These fines, if not removed soon enough, will begin to stick to each other and form a column in the grain bin and when the grain is removed all the whole kernels will go down through the hole in the floor while the column remains standing.

This is why farmers “core” a bin – meaning they remove enough of the corn from the bin right away in order to get these fines emptied out. They also have large fans that blow air through the bins that prevent the grain from molding.

If not enough grain is removed to fully core the bin, if grain gets put in at too high of a moisture level, if air can’t fully pass through the grain as it should lots of things can go wrong inside a grain bin. Molding, clumping, crusting and columns forming are all examples of what can happen when sub-quality grain is put in a bin, and when these things happen a farmer needs to enter the bin to try and get things flowing.

The dangers of a grain bin are numerous and the necessary precautions should always be executed prior to entering one. A respirator mask should be worn at all times inside the grain bin as the air flow is minimal, the dust is heavy and if the grain has started to mold at all you don’t want to be inhaling those fungal spores.

Next, a body harness and rope should always be worn. If grain is taken out of the bin and crusting has occurred, it’s likely that there are pockets underneath the crust and when you put your weight on that crust and it busts free…that’s how people get buried alive. A harness and a rope go a long ways in making sure a person stays safe in a bin. Last, but certainly not least, is a spotter. Someone at the top of the grain bin looking in making sure everything is going as it should and who can react appropriately should something happen. Grain bin safety is a serious concern. There have been many grain bin accidents in the past year. A competent farmer will never enter a grain bin unless he absolutely has to, and in the case that he does he will need to take the necessary precautions to ensure his safety.