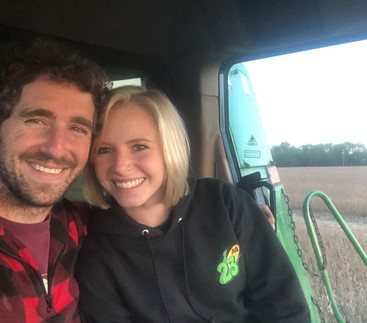 With the extreme delay in this year’s planting season it is important to cover an ever-present issue and one that is even more crucial this year. It’s an issue that can keep farmers from getting in the field with their combine, cause grain in storage to spoil and can cost farmers thousands of dollars if not managed properly. The issue I’m referring to is farm wives…uh, I mean grain moisture content (love you Kayla!).

When farmers haul their grain to market they get paid based on the weight and moisture content of the grain. Each crop has industry standards for grain moisture content – for corn it’s 15% moisture and for soybeans it’s 13%.

If the grain’s moisture content is too high it will have to be brought down to optimal levels through a drying process; there are a number of different ways a farmer can dry grain but generally the idea is to apply heat to it with the purpose of bringing the moisture content down to the industry standard.

Whether the farmer has on-site storage and dries his own grain or hauls his crop to market and pays the merchant a premium to dry the grain for him, he will have to pay money to dry his grain, and the higher the moisture the more he has to pay. This is why it’s important for a farmer to prioritize harvesting lower moisture fields first in hopes of giving the wetter fields more time to dry down.

Factors that influence the moisture level of a crop are the planting date, maturity of the variety and weather. This year we planted the majority of our corn on June 8, which was followed by many days of wet weather. Now we will have to dry every bushel of corn we harvest. Compare this year to 2016 when we planted a 101-day early maturing corn hybrid on April 23 and were able to harvest and store it without drying. By not having to dry the corn in 2016 we were able to save a considerable amount of money – that is certainly not the case this year, nor is it most years.

On the contrary to storing wet grain, over-drying the grain is certainly of equal importance to a farmer. As mentioned previously, farmers get paid based on weight and grain moisture. The more that grain is dried the more it shrinks and less it weighs, thus, the less the farmer receives for it. If the grain is over dried it becomes prone to damage and cracking and the farmer will get docked when he goes to sell it.

Since soybeans are one of the primary crops grown in this area it should also be mentioned that they dry naturally and likely won’t have to be ran through a dryer – however, they can still get too dry sitting out in the field and if that happens they will pop out of the pods and fly all over the place as the farmer tries to harvest them.

As I sit in a toasty room typing up this article I’m staring out the window at the snowstorm before me. In early November, with almost all of our corn still waiting to be harvested, I’m left to wonder what kind of grain quality and moisture levels we will be seeing this year. And in my downtime, I’ll spend some special moments with my farm wife.