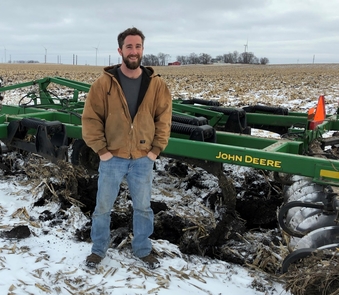 With the combine parked and the grain in storage it’s time for us to get down to business with our “fall” tillage…despite the fact that it’s January.

Tillage, in general, is the process of preparing soil for the upcoming planting season and is also used to incorporate fertilizer into the ground.

There are two main categories when it comes to tillage: primary and secondary.

Primary tillage, which is typically done in the fall after harvest, is done to bust up compaction, incorporate crop residue and distribute nutrients throughout the soil. Compaction is caused by heavy equipment (planters, sprayers, combines, etc.) traveling over the soil packing the nutrients so tightly into the soil particles that they won’t be reached by the future plant. Compact soils also make it hard for the plant to push out of the ground because the compact dirt would act similar to concrete.

Crop residue is what remains from a plant after it’s gone through the combine – tillage incorporates residue into the soil to help it decompose and return nutrients to the soil as well as build microbial activity. Crop residue is also a big factor in preventing erosion due to wind and rain.

Secondary tillage is done in the spring in order to create a smooth and level seed bed for planting.

There are a variety of approaches a farmer can take to tilling his land. He could go more aggressive like my grandfather used to with a moldboard plow. This is an implement that would go 8-12” deep and invert the soil, virtually burying all crop residue and hopefully any diseases/pathogens it contained. Consequently, by burying the crop residue it also puts the soil at the highest risk of erosion by wind and rain.

On the opposite end of the spectrum, and a practice that is becoming more popular as time goes on, is no-tilling the land. This is where, just as the name implies, there is no tillage done at all. The no-till planters have wavy coulters on them that till a strip into the unplowed soil where the seed gets planted. This leaves the soil profile virtually undisturbed.

Not incorporating the crop residue into the soil is good because it prevents erosion, builds organic matter and helps retain moisture. However, not burying the crop residue may help the pathogens/disease in the residue carry over to the next crop season. No-tilled soils also tend to take longer to warm up which would mean a possible delay in planting.

There are also several other tillage approaches that fall somewhere in between these two strategies.

On our farm we use a chisel plow for our primary tillage and a field cultivator for secondary tillage. The chisel plow isn’t as aggressive as the moldboard plow but it still tills the soil about 6-8” (compared to moldboards 8-12”) and still leaves some crop residue on the surface to help prevent erosion. Conditions have to be right, of course, as with any farm tillage.

Last year we parked the combine on Dec. 14 and weren’t able to chisel plow because the ground was too hard. Once Christmas day rolled around it had warmed up enough that we were able to get half our acres chiseled before we got rained out – and that’s where we currently are (in early January) as I write this article.

With a big nod to the weather we will see if we’re able to get the rest of our acres tilled before spring rolls around.