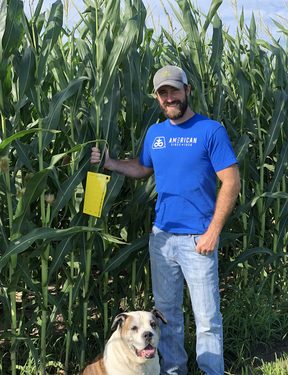 Since I’ve been writing for CONNECTIONS we’ve talked about various aspects of farming. We’ve covered planting, tillage, harvest and technology, amongst other things. But let’s shift our attention to a factor that doesn’t get as much attention – pests, and specifically for this article, corn rootworm beetles.

Rootworm beetles are a big deal in the Midwest. For these two reasons: first, they feed on corn roots as larvae, then once they’re adults they feed on corn silk. Both factors can reduce a farmer’s corn yield if pressure levels aren’t kept below a certain threshold.

Rootworm beetles lay their eggs around late July to mid-August and the eggs hatch late May to early June. About the same time of year that you begin to see fireflies floating around at night is when rootworm eggs will hatch. Once hatched, the rootworm beetle larvae will feed on corn roots, limiting the amount of water and nutrients the plant is able to take in.

If the corn plant is already stressed because of drought, fertility issues or compaction, then it will take an even bigger hit from root feeding than a healthy plant would.

Corn plants are monoecious, meaning they have both male and female reproductive parts. Tassels (male) at the top of the plant produce pollen which falls onto the silk (the hairy stuff you see coming out the top of an ear of corn). Each individual silk is attached to an ovule on the cob, so when the pollen falls on the silk it takes the pollen in and transfers it to the ovule, fertilizing it and forming a kernel.

However, when the corn rootworm beetles turn into adults they “clip” the silk keeping the pollen from the ovules, thus causing them to abort and creating a poorly filled ear.

So what can a farmer do? For starters he can have a good crop rotation, meaning he can switch crops every year or two instead of planting corn in the same field every single year. This way when the adult rootworm beetle lays her eggs in existing corn fields they won’t be able to find a food source the following year if the field is planted into a non-host crop such as soybeans.

This isn’t a complete solution, however, as there are always exceptions – but it is certainly a great start. In addition, farmers can plant a GMO corn hybrid designed to combat rootworm feeding and potentially eliminate the need to apply insecticide.

To be proactive for the upcoming year the farmer can put out sticky rootworm beetle traps (see photo above) in his field during mid-July to August. The farmer will swap out the sticky traps every week for six weeks, counting the number of beetles he caught each time and assessing the amount of rootworm beetle pressure in his field. Having this knowledge of beetle pressure levels will assist the farmer in making decisions for the upcoming year. There are many obstacles to navigate in farming and although corn rootworm beetles don’t get as much attention as other hinderances they are not something farmers can turn a blind eye to. Luckily, farmers have the tools they need in order to keep pest levels reasonable to help maximize yield potential.