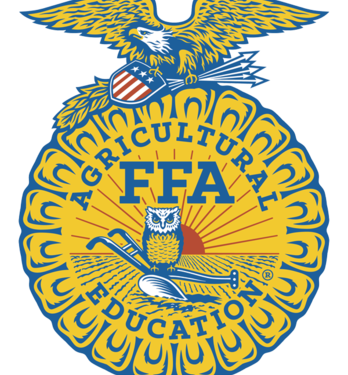 Logan Bend from rural Shabbona was this year’s winner of the State FFA Proficiency Award in Grain Production. The award was based on his Supervised Agricultural Experience (SAE) of corn and wheat production on his family’s farm.

Logan, 18, works with his father, Rick, on their grain farm. He operates equipment, maintains machinery and provides labor for their farm operation.

To attain the top award, Logan kept a set of record books from his freshman year of high school to the present. He competed and won at the section and district levels before advancing to state. At state he was interviewed amongst four other FFA students and was named the state winner.

“I was very excited when I found out that I was the state winner in grain production,” said Logan. “Farming is a big part of my family’s history, and I have been passionate about becoming as knowledgeable as possible so I can carry on the family tradition.”

Logan gives credit to his father for mentoring him and to his FFA advisor, Julie Vlosak, and the Indian Creek FFA Alumni for preparing him for award interviews. Additionally his sister, Catie, guided him as she previously had an SAE in grain production and his mother, Erin, also provided support.

In FFA, Logan has achieved his State Degree and was named District Star Farmer last year. During his senior year he was Co-President of the Indian Creek FFA and throughout high school has held other offices and been involved in many events.

He graduated from Indian Creek High School in May and will be attending the University of Illinois to major in agribusiness markets and management. Logan aspires to hold a career in agriculture and continue on the family farm.

Max Griffey of Sycamore won the State FFA Proficiency Award in Ag Mech Repair and Maintenance. He attained the top award based on his work of maintaining and repairing small engines in compact construction equipment.

Max, 18, works at CSR Bobcat in DeKalb. As an employee he does oil changes, schedules maintenance, parts replacement and equipment repair on equipment along with rental fleet and customers’ machines. He has worked at CSR Bobcat for the last two years as part of the Supervised Agricultural Experience (SAE) FFA program.

To qualify for proficiency awards, Max kept a set of records for the last three years and interviewed at the section, district and state competition. “When I found out I won state, I was very excited and proud of my accomplishments,” said Max.

Max lives in the town of Sycamore and has always wanted to be involved in the ag industry. In high school he took ag-related classes like ag mechanics and then took classes through Bobcat University to expand his knowledge and experience with equipment.

“This SAE has given me the confidence to be able to work within the ag industry as I hope to one day work for a larger company or myself in the area of equipment repair,” he said.

In the meantime Max is keeping his FFA record book up to date to qualify for the American FFA Degree and national competition with his SAE. He credits his ag teachers Mrs. Poynter and Mr. Thurwanger and parents Kate and Jason Griffey for giving him the extra push to get the record books done!

In FFA, Max was the FFA Senior Plot Manager overseeing their field plot during his senior year. He graduated from Sycamore High School in May and plans to attend Kishwaukee College in the fall in their agribusiness program.