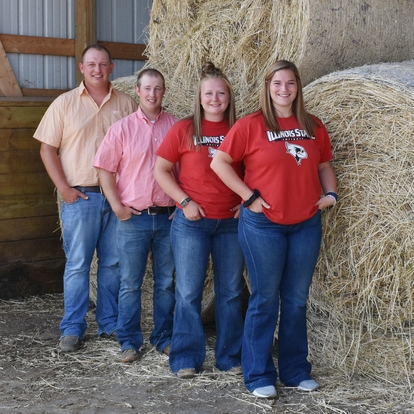 Olivia Harvell and Samantha “Sam” Fleming giggle, just like they did when they were little. They have been friends “forever” say the 20-year-olds in unison.

“We have baby pictures together – I think we came into this world as friends,” chuckled Sam.

Olivia claims that the two have done just about everything together – “Sports, swimming, showing cattle…”  “And Barbie’s, too,” added Sam.

The young women sometimes finish each other sentences, which evokes more giggles. 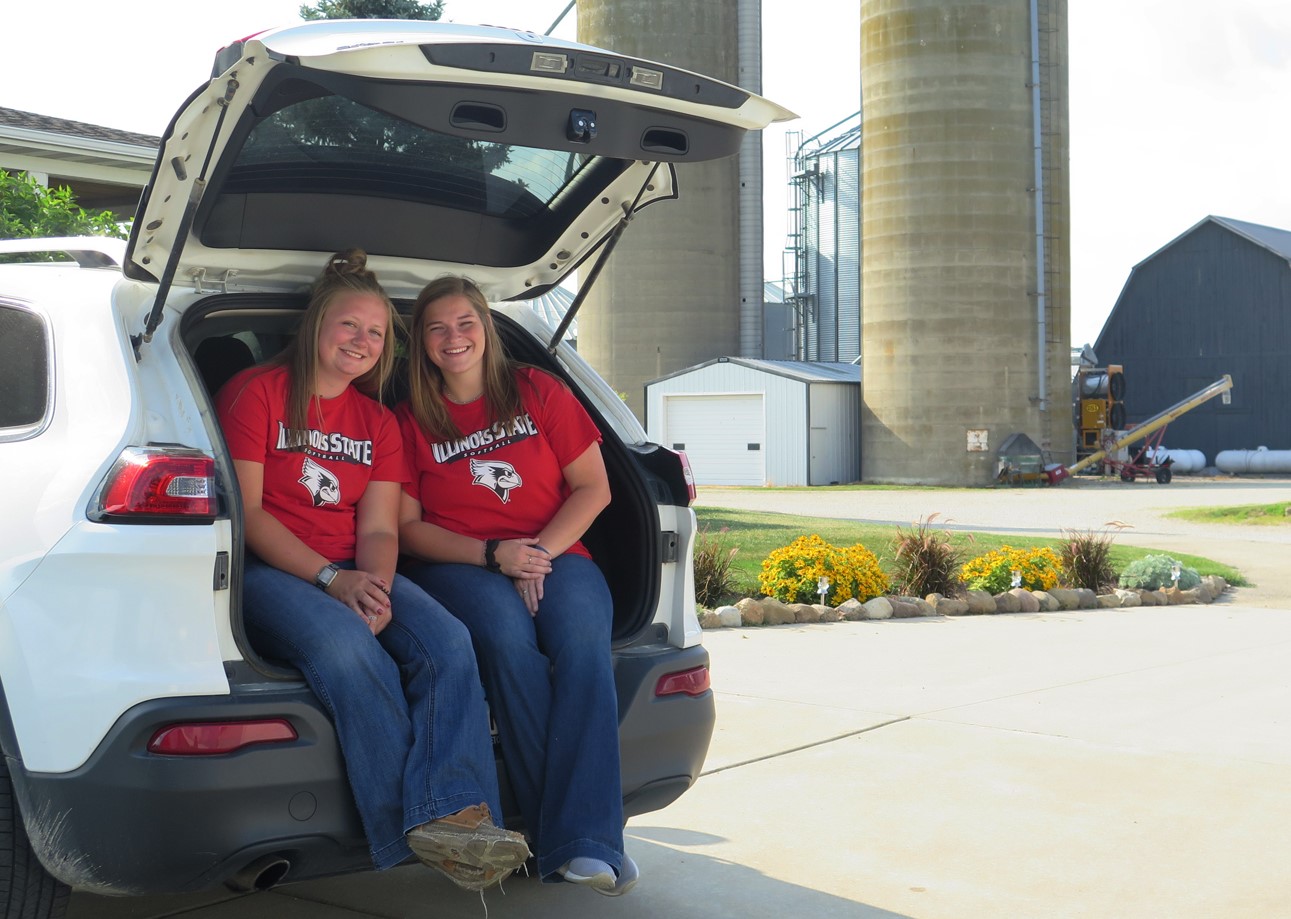 It’s back to school for Olivia Harvell and Sam Fleming. They are starting their junior year at Illinois State University and majoring in animal industry management. The two have followed the same college path.

Sam Fleming and Olivia Harvell say they are “more like sisters” than friends. Only four months apart, their personalities and interests have made them inseparable.

In high school, they were co-vice presidents of Indian Creek FFA Chapter and played sports. Both were on the softball team and won regionals their senior year. They were Shabbona 4-H members with beef projects and concentrated on showing cattle at local fairs.

Their brothers, Ivan Harvell and Dane Fleming, have a similar friendship. In their younger years they both figured out how much each other “loved farming” and have been friends ever since.

Ivan and Dane were also FFA co-vice presidents. They were in high school sports and showed beef cattle during their 4-H years. “Showing cattle was pretty much what we did when we were younger,” said Ivan.

“We have a lot in common. When we get together we talk farming,” he said. “And we keep talking farming,” continued Dane. 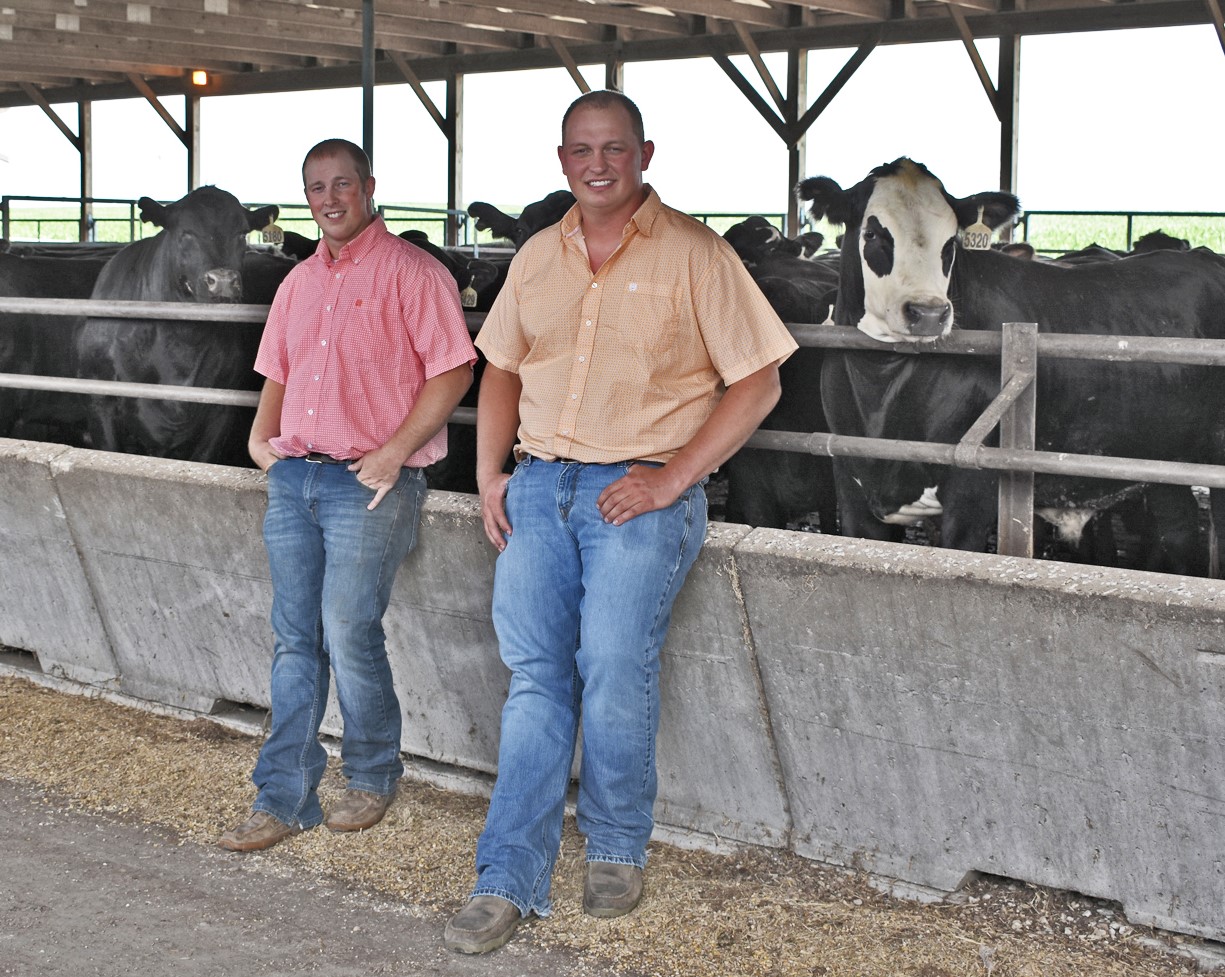 Dane Fleming and Ivan Harvell attained associate degrees in ag production and certificates in diesel mechanics, which they found valuable as young farmers.

Dane says they are “like brothers” and have been supportive of each other throughout their young lives.

In 2012, it was the first time the two of them had been apart, at separate community colleges. Yet while they were there they talked and texted frequently about ag classes and of course, farming.

After completing their associate degrees, both young men realized they wanted some hands-on training with farm equipment so they enrolled in the diesel mechanics class at Kishwaukee College and together again completed the two-year certificate program in 2016.

“In order to be a decent farmer I wanted to learn more about ag production and gain some mechanical skills at college,” said Ivan.

Dane agreed, “I wanted to farm so I needed education in both (ag production/diesel mechanics) to do a good job.”

Sisters Sam and Olivia chose to attend Joliet Junior College two years ago for their general education classes and now are headed to Illinois State University (ISU) as junior transfer students. It’s ironic that the girls were on the Normal campus for a softball clinic when they were high school sophomores and now are college students there.

Both young women are majoring in animal industry management and are “excited” for the next phase of college. “Two years will go fast, based on the last two years,” said Olivia. “I hope to learn a lot.” And, the young women plan to join some of the ag clubs.

The ISU students are living together in a house in Bloomington, about eight miles from the Normal campus. Most of their ag classes are held at the Ropp Building. 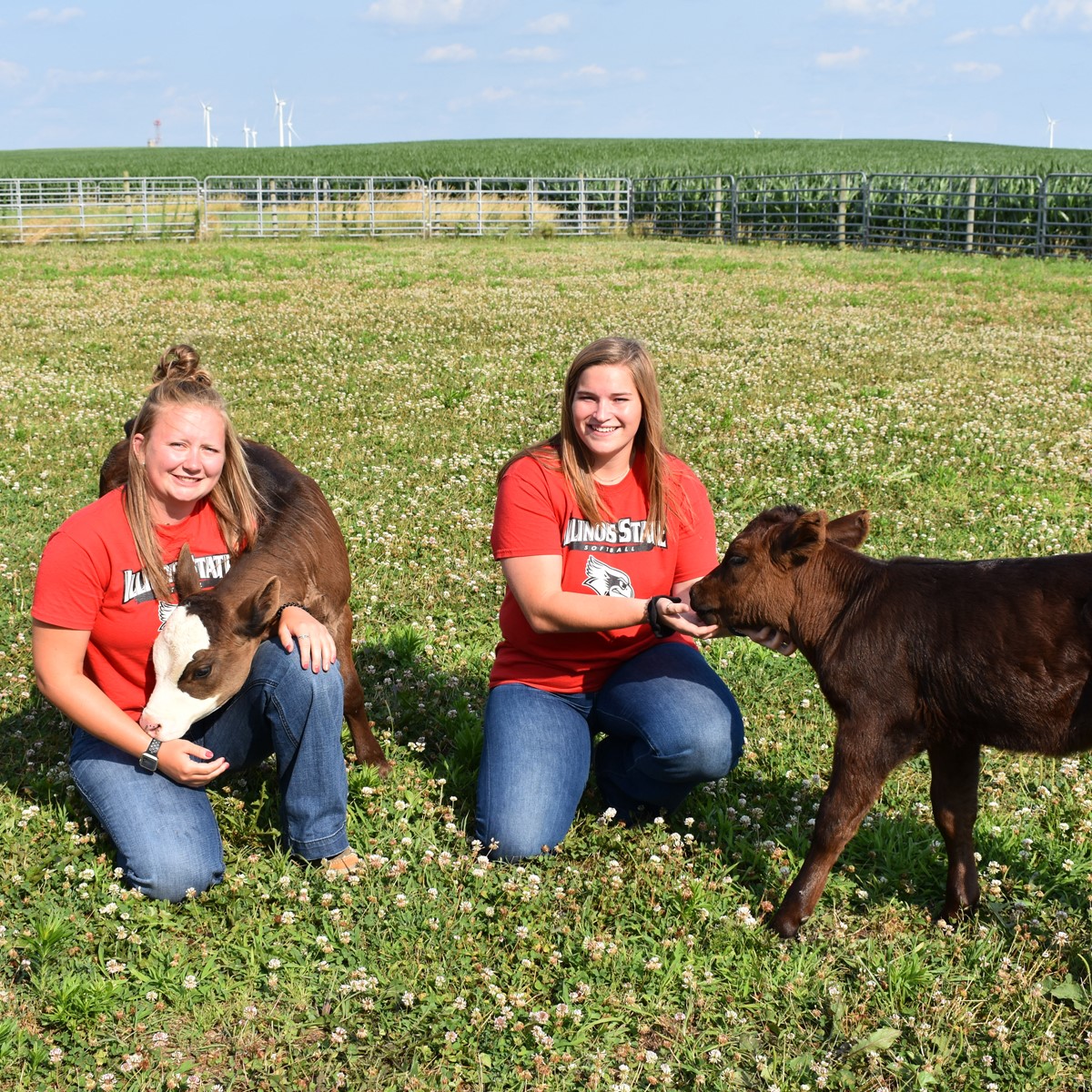 For most of their lives, Olivia Harvell and Sam Fleming have been raising and showing beef cattle. 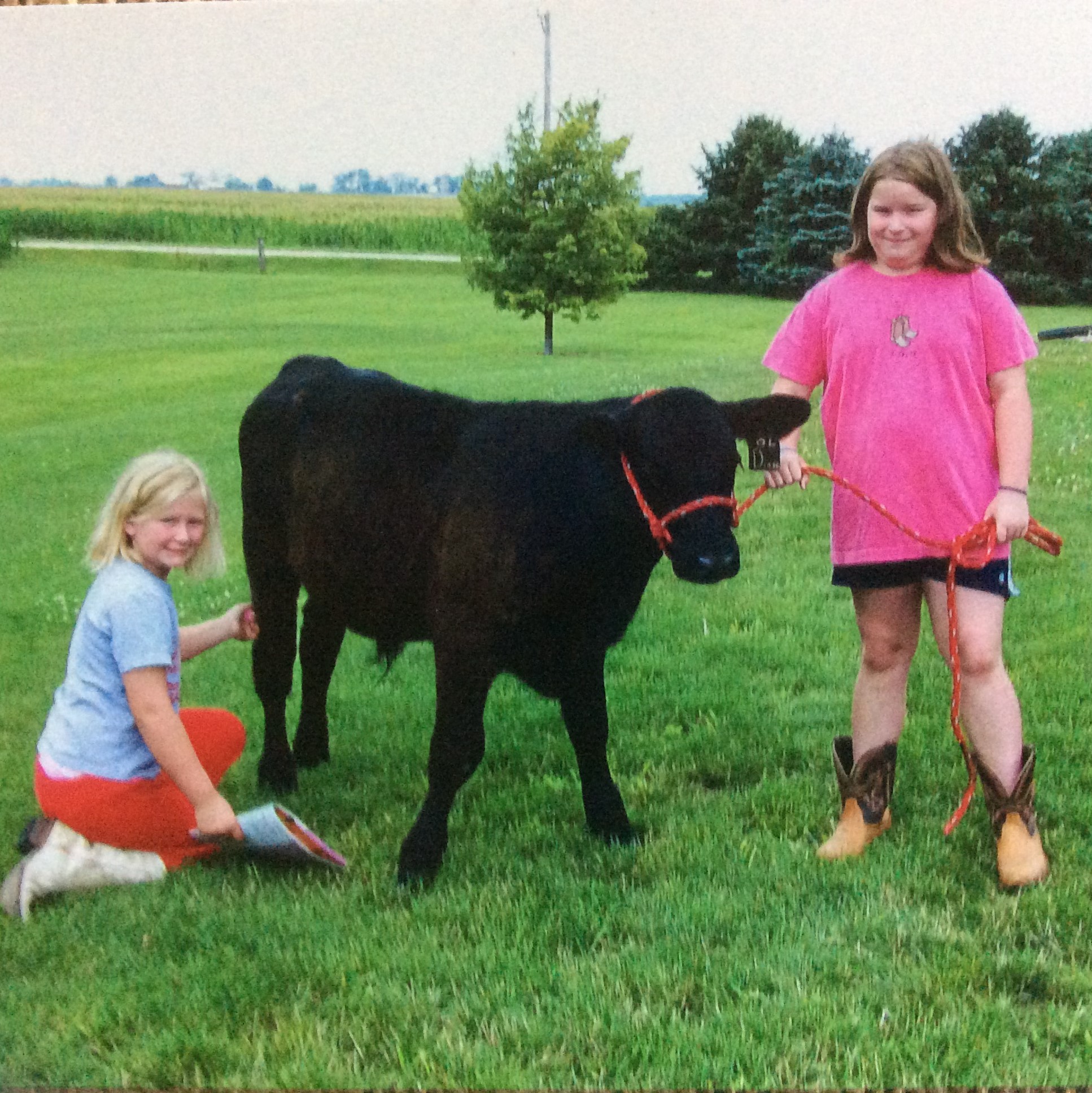 Olivia (left) and Sam (right) years ago when they were getting started showing a bucket calf.

For the past three years Dane and Ivan have been farming with their families raising beef cattle and growing corn and soybeans. It’s what these 25-year-olds love doing.

Dane is a sixth generation farmer who farms with his father Greg, uncle and grandfathers in rural Lee. Dane is the cattle manager – taking care of all aspects of their 400-head of cattle in their feedlot. He also helps with grain farming as he proudly “continues the farm legacy.”

“Since I was in 8th grade I knew I wanted to farm. There’s a lot of things I like about farming – especially watching things grow, like calves and seeds,” said Dane.

Ivan, a third generation farmer, works with his father and mother, Wally and Laura, at their farm in Steward. Ivan feeds the 500-head of beef cattle on a daily basis and also drives semi-truck and works with the grain side of farming. 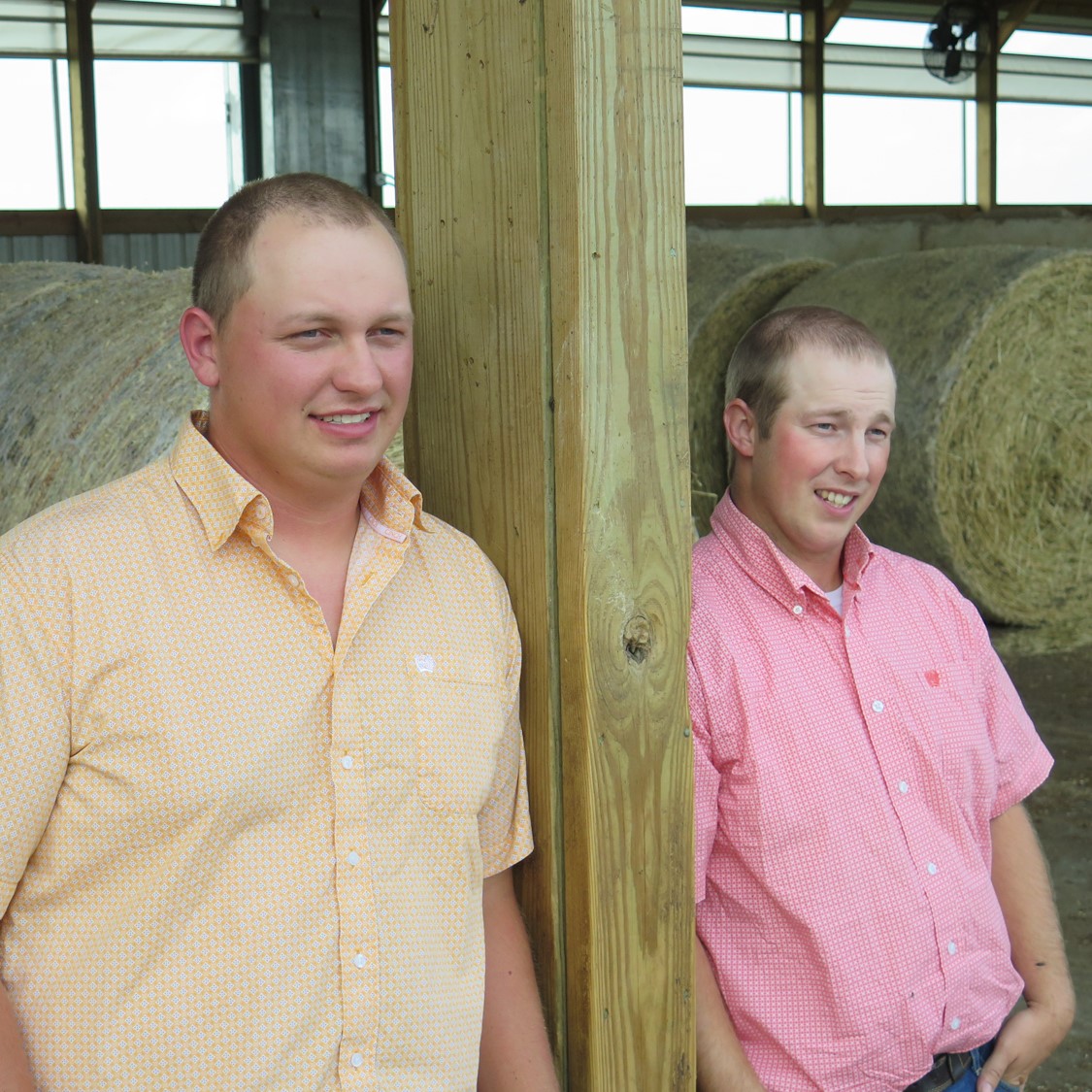 Ivan Harvell and Dane Fleming have maintained a friendship for 25 years, having similar interests. 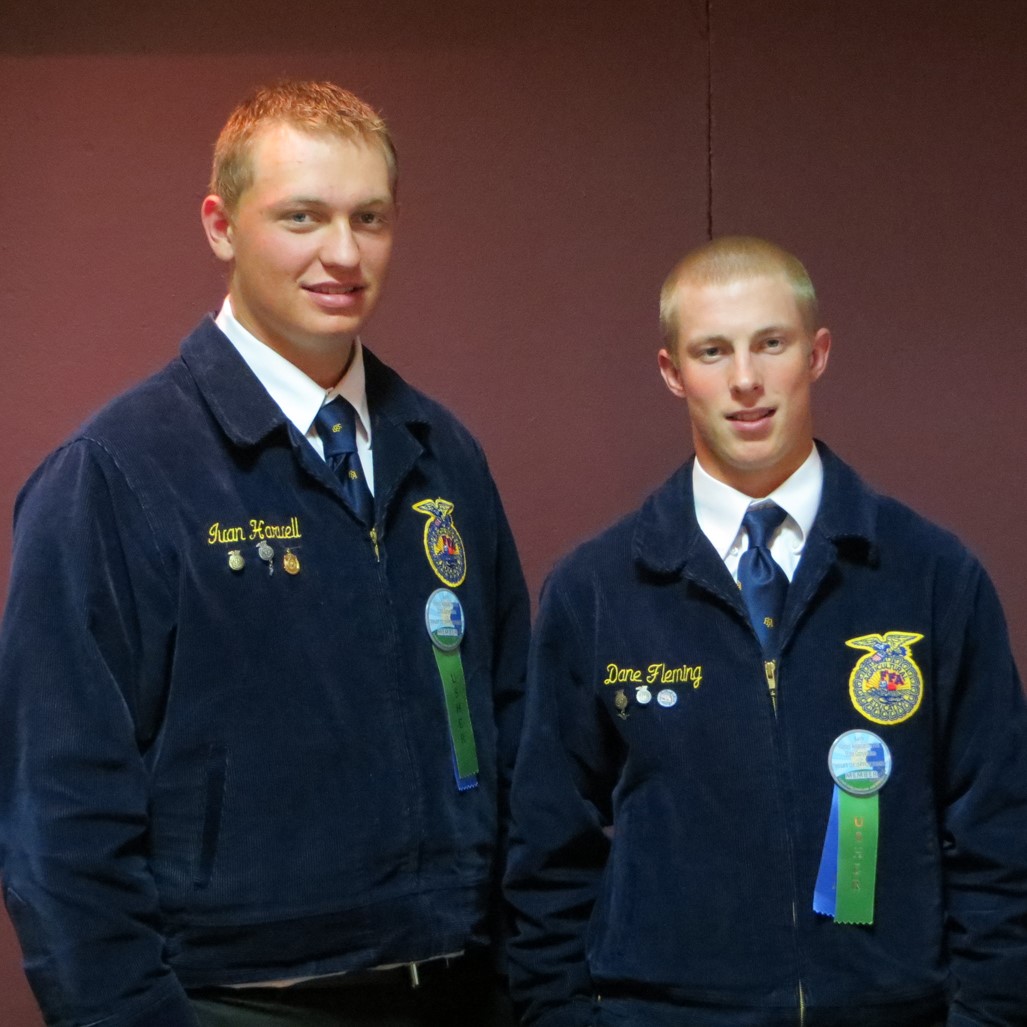 When Ivan and Dane were in FFA they were co-vice presidents of their chapter.

The young farmers didn’t appreciate this year’s tough crop year. “It was long. Once the rain stopped in June we just kept on going with planting,” said Dane. “There’s not much you can do about a year like this.”

Later this month, Ivan is getting married to his high school sweetheart, Kendal, and Dane is his best man in the wedding.

While Ivan and Dane continue their passion for farming, their sisters hope to attain college degrees and then pursue careers in agriculture.

Sam’s “dream job” is to be a beef cattle nutritionist as she would like to develop feed rations. She’s hoping her college education will lead to a career in animal nutrition and marketing.

Olivia’s aspirations are to attain a marketing and agribusiness job in the future.

However, both young farm women haven’t disregarded the idea of returning to their family farms.

“Ideally, I would like to come back to the farm and help my family with marketing cattle and corn,” said Olivia. “Ivan brings the hands-on work to the farm and I would bring the business side.”

“I would like to return to the farm, but also work as a nutritionist,” said Sam. “I can’t imagine a life without cattle and grain. I hope to bring something back to the table for our farm.”

Both brothers welcome their sisters’ return to the farm. When Sam and Olivia hear that they smile with gratitude and exude a sense of solitude. Then, of course, giggle.