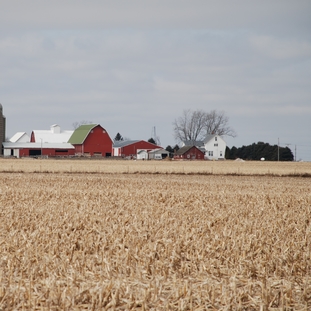 Selling a farm residence off farmland just got easier.

Recent changes were made to DeKalb County’s Comprehensive Land Use Plan that allows landowners to parcel off their farm residence from their 40 acres and sell it as part of a few acres.

Previously, the county’s 40-acre rule required landowners to sell their home (built after 1998) with a minimum of 40 acres.

“The recent text amendment to the zoning ordinance approved by the County Board to the so-called ’40-acre rule’ is intended to ameliorate the unintended hardship that the 40-acre minimum lot size requirement created for farmland owners,” said Charles Brown, local attorney.

Brown has represented farmland owners/operators in their businesses and estates for the past 42 years. He has seen the hardship the 40-acre rule created for his clients.

The 40-acre rule, which requires a minimum lot size of 40 or more acres to construct a single-family residence in the A-1, Agricultural District, was first implemented in the late 1970s. Along with other revisions to the county’s zoning ordinance, it was intended to minimize urban sprawl in areas outside of the county’s municipalities.

Forty years later, many of the occupants of those farm residences are now nearing retirement and would like to sell the farm residence but not the 40 acres upon which the residence is situated. The new zoning ordinance allows for that.

The goal was to find a resolution that provides the necessary relief sought for farmland owners while at the same time maintain the county’s goals set forth in its 2011 Comprehensive Plan to preserve prime farmland and discourage scattered residential development in the county, explained Brown.

“I’ve been monitoring the 40-acre rule for several years and kept an eye on how it has affected farm families and estate plans,” said Steve Faivre. “We tried to fix an overall good idea by keeping the density of homes down in the country and not trap landowners living on the 40 acres.”

Faivre worked closely with Brown on revising the zoning ordinance. The text amendments were reviewed by the Planning & Zoning Committee and county staff, introduced at a public hearing and recommended by the hearing officer, and finally approved by the County Board last month.

As a member of the County Board, Faivre said his goal was “to clean up regulations that made sense. This makes sense and will benefit farmland owners – from young people to retired people – and for estate planning.”

“The revisions actually enhance the purpose behind the 40-acre rule,” said Brown. “The 40-acre rule was not intended to prevent the construction of farm residences in the A-1, Agricultural District, it was designed to discourage the subdivision of land into small lots and the subsequent construction of residential developments in the middle of the county.”

Mark Tuttle, DeKalb County Farm Bureau President, said, “It’s a change that was needed to benefit our agricultural community and at the same time continues to maintain the 40-acre rule.”

The regulation still prohibits the construction of a new farm residence on less than 40 acres. Also, farm residences built before 1998 can still be sold off with a few acres.

New provisions allow farmland owners to sell off the residence on a lot of two acres or more but then the remaining acreage among the 40 acres prohibits the building of any future farm residence. Also, new owners of the farm residence will be informed of the Illinois Right to Farm Law that prohibits non-neglect nuisance lawsuits against grain and livestock farms.