A big cover crop of oats and late corn harvest are on the horizon.

Thousands of acres of cover crops are growing in fields where corn typically grows in DeKalb County.

When you are used to seeing field after field of corn in the county this year you may have noticed another crop instead. Oats.

That’s because some farmers weren’t able to get their corn planted due to an extremely wet spring and ticking time clock for planting field corn in northern Illinois. The USDA recently released numbers of unplanted acres, which is referred to as prevent plant acres.

In July, DeKalb County Farm Bureau had estimated one-fourth of the county’s total corn acreage went unplanted. The actual numbers were reported by the USDA in August indicating 23% of the county corn acreage ended up as prevent plant acres.

Total acres planted in corn for the county amounted to 163,392 acres.

Because soybeans can tolerate a later window for planting, the majority of soybean acres got planted by the end of June. Total acres planted in soybeans were 118,163 acres with only 4,080 soybean acres in prevent plant, according to the USDA.

Farmers like Don Frost of Hinckley opted to plant a cover crop of oats because he was unable to plant field corn in a timely manner. All of the 1,200 corn acres that he farms went into oats.

“I decided to not risk late planted corn that likely would be wet corn (due to maturing later) and produce lower yields,” said Frost. “And I chose oats because it’s more economical than some of the other cover crops.”

He selected the cover crop of oats as a nutrient provider and to maintain soil health for next year’s corn crop. Frost and nine other farmers jointly purchased semi-loads of oats that originated in Canada and spread it over about 4,000 local acres. 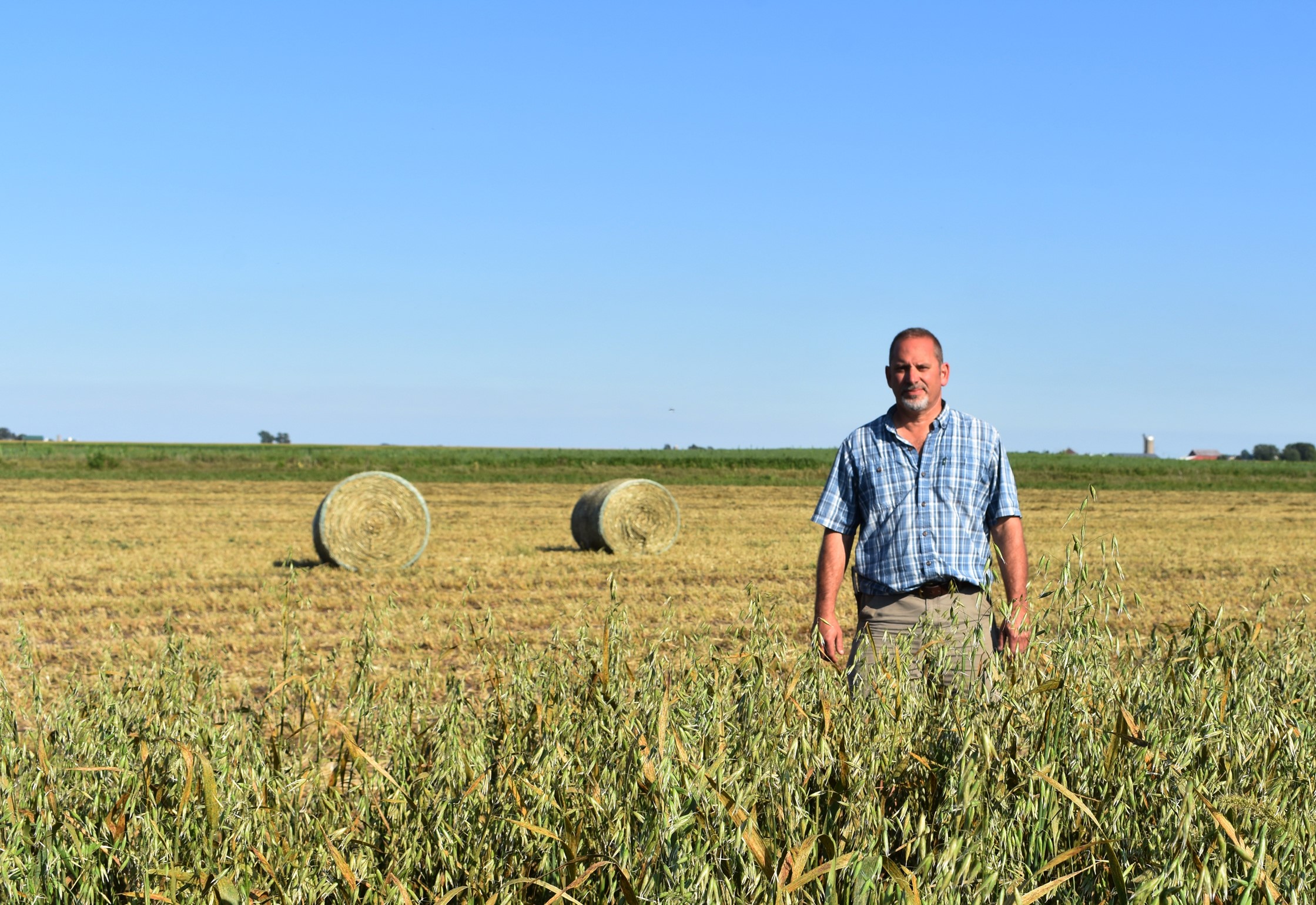 Oats are grown on all of his corn acres. Don Frost, Hinckley farmer, chose to grow oats on the 1,200 acres he farms, which is typically in field corn. His wet fields in June made his decision easy. Now he is baling some of his oats to use as cattle feed.

The USDA reported that 80% of the cover crops grown in the county were oats. Other cover crops planted were: a variety of grasses, cereal rye, field radishes, wheat, hay and soybeans.

In an average year, DeKalb County farmers plant about 4,500 acres of oats. This year’s unsettling crop year prompted ten times more oats with around 45,000 acres planted as a cover crop.

It’s been 15 years since Don Frost has planted oats, as a feed crop for his cattle. Years ago he planted it with alfalfa to have a mixture of oat straw and alfalfa hay. Another reason for choosing oats as a cover crop this year was potentially for livestock feed. 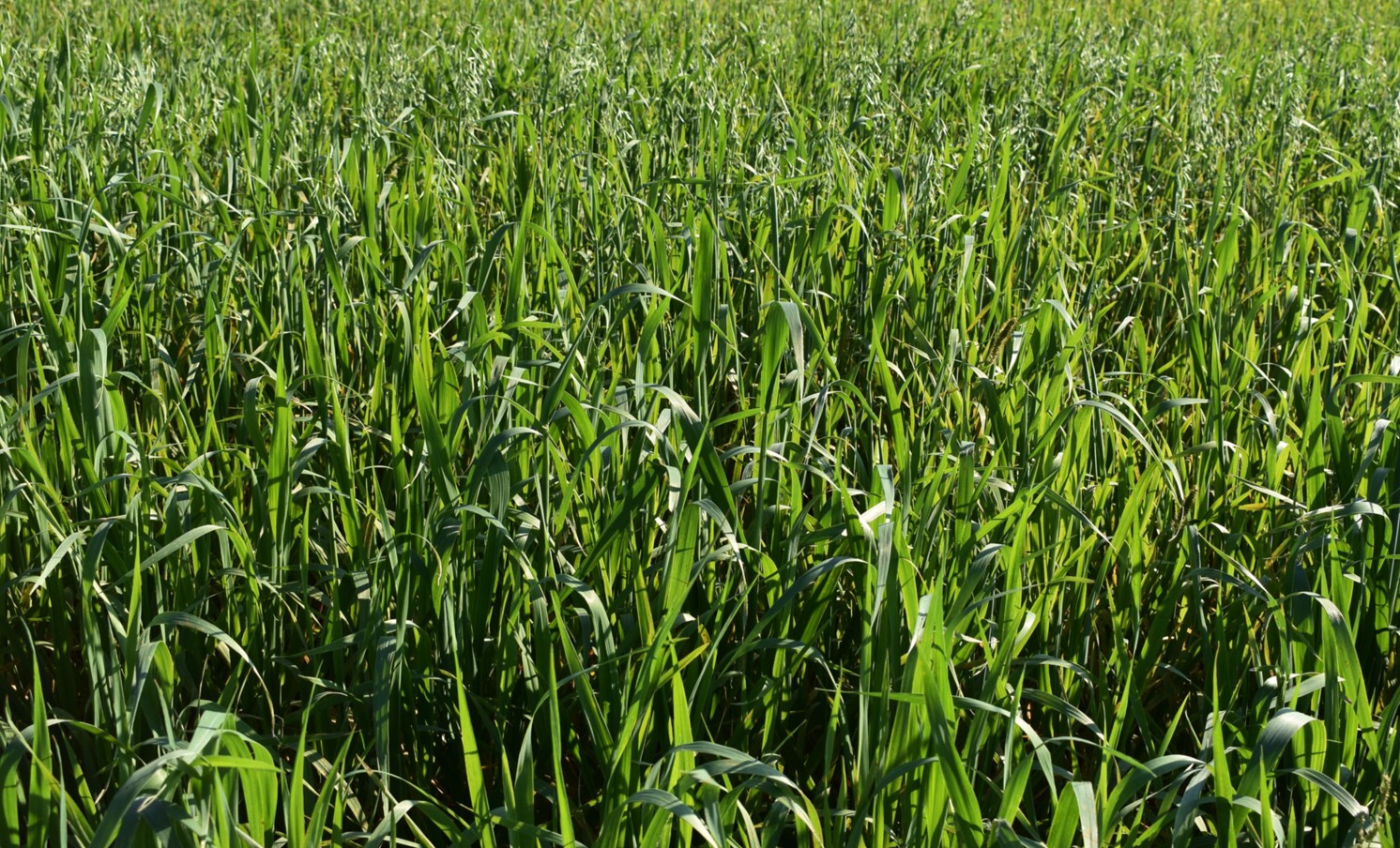 Green fields of oats seen, instead of corn fields. Many farmers are growing oats instead of corn as prevent plant acres. 80 percent of the cover crops chosen to replace corn are oats.

The rules for prevent plant acres allow farmers to make their own choices of cover crops but they are not allowed to harvest the crop and sell the grain based on receiving a crop insurance payment. However, they can use the crop to feed livestock due to the hay shortage.

Local farmers began cutting oats last week when it was in the milk stage to capture the most protein value. Farmers baled the oats into large round bales and then encased them in plastic to preserve the roughage and keep it from spoiling while being stored on their farms. 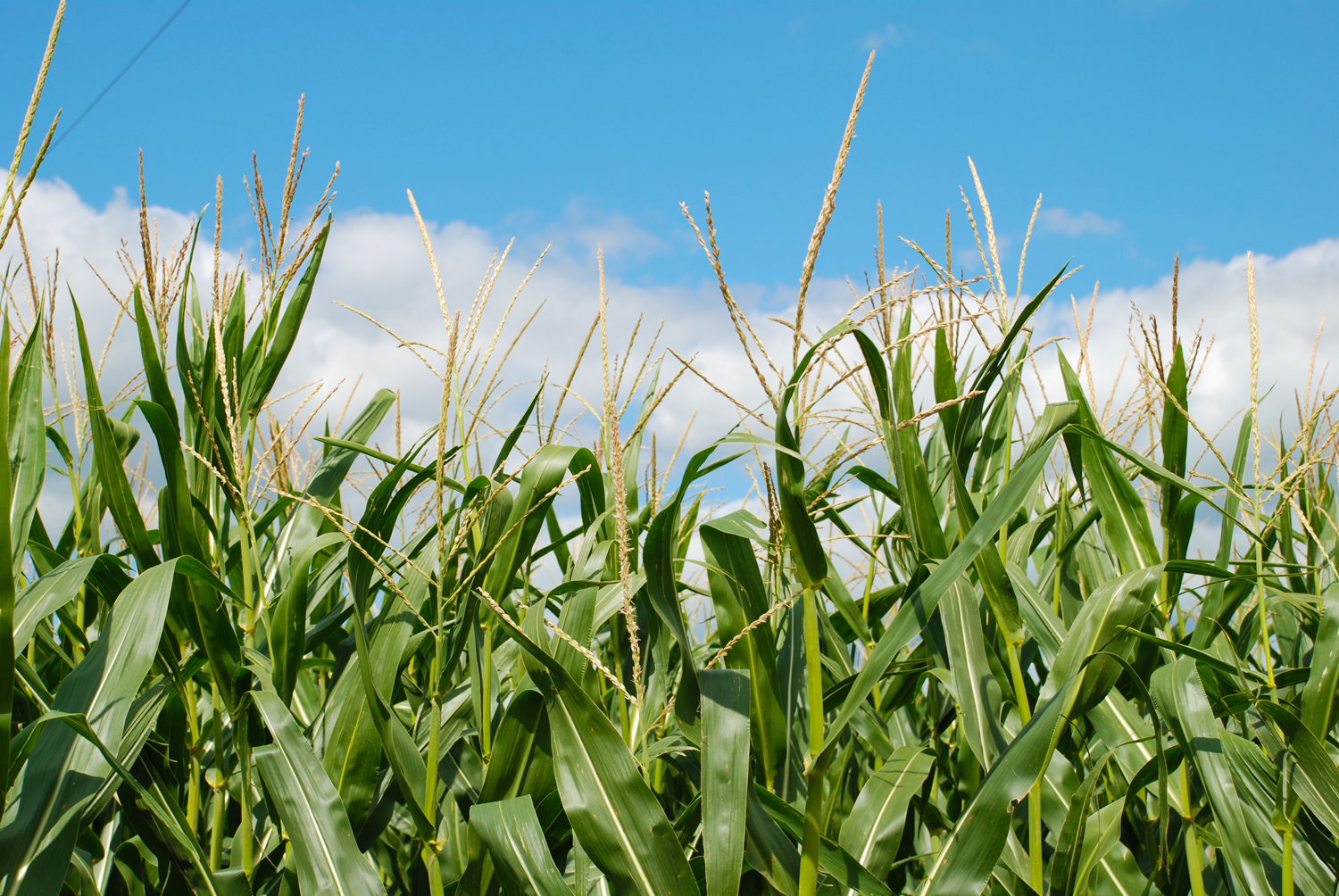 Corn still maturing, later harvest expected. With most local corn planted in early to mid-June, the crop is about a month behind in maturity. Farmers expect the majority of harvest activity in November.

“Wrapped up in silage bags, the bales of oats ferment like corn silage, which will eventually be fed to our beef cattle,” said Frost. He has a cow-calf herd which will utilize the round bales of oats. The Hinckley farmer expects to bale about 10 percent of his oat acres.

Ask a farmer about the upcoming harvest and most say: Time will tell.

With most local corn planted in early to mid-June, the crop is about a month behind in maturity.

Tuttle expects the majority of harvest activity to happen in November, compared to October in most years. He and other farmers anticipate a wetter crop, reduced yields and lower test weights based on the lateness of this year’s crop.