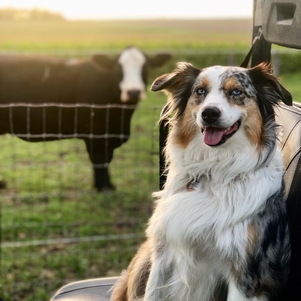 A farmer’s best friend is oftentimes their dog – by their side in the shop, riding with them in the pickup truck/tractor, or herding livestock. But other farm animals also provide companionship for farmers and their families. Featured are farm family members with their favorite farm animal companions.

Justis Willrett and his dog, Kate, are practically inseparable.

The 4-year-old Australian Shepherd tags along with Justis while he’s driving tractors and doing field work. “She rides in any piece of equipment, but she usually falls asleep quickly,” said Justis.

Her natural herding instincts are a big bonus for their beef farm as she likes being around cattle and helps herd new feeders.

Kate also hangs out in the shop with the farm crew and always is up for a never-ending game of fetch.

She knows hand signals for moving, staying, laying down, and returning, which are good skills for a farm dog. “Kate obeys any command and is a very good listener,” explained Justis. “She can sit, stay, speak, fetch, and shake.”

Justis got Kate when she was 8 weeks old from a herding breeder in Missouri. That’s when Justis was living in Kansas and attending K-State. Kate adapted to Justis’ changing environments and his travels. “She became used to change and new settings quickly,” said Justis,” and made friends easily.”

Kate is naturally dominant but warms up quickly to friends. “Kate can be very protective of her humans and even her ‘dog siblings’ at the farm. She can be very vocal as well, which is completely harmless, but quite funny. It is similar to a kid ‘back talking’ a parent,” said Justis.

Pete Cowan’s dog, Penny, likes to go for rides in the pickup truck.

Penny is Pete’s sidekick riding in the truck and being by his side in the farm shop, while also keeping the cats in line.

The 9-year-old farm dog is a pit bull/terrier mix (so they think per their vet). She was rescued from an animal shelter seven years ago. At first the dog favored Pete’s wife, Lisa. Eventually Penny warmed up to Pete and is now his farm companion and “his dog.”

“She’s a very loyal companion and loves to be with the family,” said Pete. When their dog isn’t with Pete you might see Penny running alongside the Cowan girls on Sleepy Hollow Road or find her curled up with their youngest son.

Pete tells the story of the time their oldest son had gotten a deer and Penny decided to help herself to a very large bag of venison. “She ended up burying it in the field and would enjoy those treats every so often. Needless to say, it took our son a long time to forgive her!”

Jack, 12, is a miniature donkey and their farm’s most popular animal. He gets plenty of attention when the family’s pumpkin stand is open as well as being in a nativity scene at their church.

Christina says Jack is also a good livestock guardian and keeps coyote’s away from their more vulnerable farm animals with his loud bray. “Jack tends to bray when he gets excited or he’s hungry. He loves carrots and apples, and will eat them with super speed, if that’s a skill!”

It’s true what they say about donkeys, they can be stubborn. “If he doesn’t want to move, pushing or pulling him will get you nowhere. However, a treat might entice him to get going again,” she said.

Jack is a barn buddy to their miniature horse, Junior. They have a love-hate relationship. “Jack tends to instigate chases with Junior, but when he’s had enough running around he will sit down on his back legs. Meanwhile Junior will run circles around him until he gets bored. It makes for a very funny scene!”

Kelly Nehring’s horses bring her joy and are part of their farm family.

Kelly’s favorites have always been what she calls babies, her youngsters, which she purchases at four to six months of age. Baby Ruth, Teddy and Spree were her favorite foals. Now they are 2-3 years old, but still hold a special place in her equine heart.

“Nothing compares to the joy you get when the babies you have raised come racing towards you in the field and seek out your companionship,” said Kelly. “The trust and bond that develops is a feeling like no other. They are a perfect example of ‘you get what you give.’”

Kelly and her husband Randy take care of about 20 pleasure horses – some of their own and they board horses too. They are also starting to raise Rocky Mountain Saddle horses sometimes referred to as the golden retriever of horses. Their unique 4-beat gait is different than traditional pleasure horses.

Other farm animal companions are their Australian cattle dogs (blue heelers), Kona, 5, and Hilo, 3, along with fostering heelers. “They are all part of our farm family,” said Kelly.

Nelsen Tuttle’s dog is by his side in the farm shop and in the trucks & tractors.

The Somonauk farmer and his dog, Tuxedo, are farm buddies. Nelsen got Tuxedo when he was a puppy. Now he’s 9.

Nelsen says the neighbors call him the “township dog” because he is often at the township building, a quarter-mile away from the farm. Being township road commissioner, Nelsen spends time there and on the farm, with his companion.

“Tuxedo has a route he likes to run – to the township building, to the neighbors and then comes back home,” said Nelsen. “He checks on my grandparents and the cattle, plays with the neighbor’s dog and sees the neighbor kids off on the bus. Then he returns home to hang out with me in the shop.”

Tuxedo is the farm’s guard dog, a purebred mutt, explains Nelsen. He likes watching Nelsen work in the shop but if the machinery noise gets to be too much Tuxedo will leave and return when it’s quieter. Tuxedo has a shop routine of picking up his bed and moving it around until he gets Nelsen’s attention to stop working and play with him.

The two enjoy each other’s companionship, especially riding together in farm vehicles.

Morgan Fidler has a special connection to her crossbred lambs.

She typically gets a few crossbred lambs each year to show at the 4-H and FFA fairs. Morgan takes care of her Shropshire-Hampshire sheep working with and providing for them daily. “They know my voice and their name so they run to me when I call for them,” Morgan said.

Her lambs spend their days eating grain and some hay, going on walks that sometimes turn into runs with Morgan, and getting their legs rinsed to stay clean.

Morgan notes that their personalities differ. “Some have the sweetest disposition and others are a bit of a touch-me-not.” Because of this she connects with her favorites, like Jay and Reed, the sheep she showed last year.

The 17-year-old will soon be getting more sheep to show this year. Morgan purchases lambs in the spring and then sells them after the shows in August. “I sell my lambs and will use the proceeds to buy more livestock the next year and also to help pay for college.”

Besides having a few sheep on the farm, the Fidlers raise beef cattle. Morgan also shows steers at the county fair.

Alpacas aren’t your typical farm animal companions, but this family enjoys them.

The Westers are raising five alpacas – Edna, Camilla, Winnie, Betty and Velvet – all females. They range in age from 18 months to 14 years. Their favorite alpaca is Velvet because she was the first alpaca to be born on their farm.

Dave and Patty Wester and their children got started raising alpacas five years ago based on Dave’s interest in the animals. And, it was a compromise for daughter Chloe who wanted a horse but got alpacas instead. Chloe and her brother, Noah care for these unique animals.

“Alpacas can be friendly if socialized a lot as a cria (baby) and continually as adults, but often remain a little wary and distant though not mean generally,” said Patty.

Alpacas have fluffy hair and are sheared once a year for fleece production. They are raised for their fiber here in the U.S. but are considered pack animals in Peru. Besides alpacas, the Westers also raise bronze breasted turkeys, chickens and pigs.

Ryan and Ashley Hayes help their young children Reece, Taylee, Paxon and Payton understand the responsibility of animal care as they enjoy their companionship.

Reece, 5, is fond of their horse Ike, a 12-year-old pleasure horse. She also loves collecting eggs every day from their chickens. Reece rigged up a basket on the back of her bike to make egg collection easier. She likes “selling the eggs and making a profit.”

Taylee’s kitten Orangee was born in May and is her favorite animal on the farm. He is supposed to be a barn cat, but Taylee, 7, often sneaks him in the house. Her favorite part about the animals is when any of them have babies, “because they are so cute,” she says.

Paxon, 10, enjoys the beef cattle and calves the most among their farm animals. He likes “researching cattle genetics” to add to the herd and “searching for bulls” across the country.

Payton, 12, loves the goats because of their “funny personalities.” He appreciates how they can be trained and their friendliness around people. He has enjoyed raising Boer goats since he was two years old; his favorites are Maggie and Pirate. Payton and Paxton look forward to showing goats, sheep and cattle at the 4-H Fair. The family raises Black Angus, Simmental and Hereford cattle.