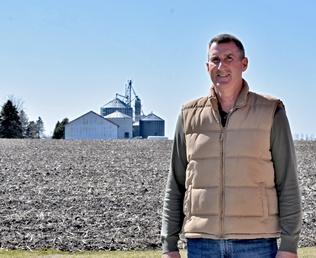 When Steve Bemis was elected as the new DeKalb County Farm Bureau President he knew that it would require the same passion as his lifestyle of farming and interest in sports. “I saw the need to step up and serve in this leadership role,” said Steve. “I had the experience and it was my time.”

Steve’s family has been part of the Farm Bureau family for generations. His father, Jerry, served on the county Farm Bureau Board and was president of the FS supply company. His mother, Sue, is a former Women’s Committee member and worked at the Extension office in the Farm Bureau Building.

At the age of 32, Steve was elected to the Farm Bureau Board in DeKalb Township in 1995. He assumed his father’s seat on the board after Jerry had served as a director for 17 years.

“The first year I was on the Farm Bureau Board my first vote was approving the building of the new Farm Bureau Center for Agriculture. It was a big decision then. Now the building is already 25 years old.” said Steve.

A few years after being on the board Steve was elected to the Executive Committee serving as a member, then treasurer for seven years and last year was vice president.

In 25 years he has seen many changes in the farm organization, most notably the reduction in farmers. “There’s a shrinking pool of farmers participating in Farm Bureau activities (based on fewer farmers). And our farmers are getting older,” explained Steve.

That’s why the new Farm Bureau president plans to reach out and talk to young farmers to get them involved. “Young farmers need to realize how important they are to our organization. They are the future,” he said.

Steve recognizes the greatest asset of the grassroots organization is being the “voice of agriculture.” The new president further stated that lobbying for legislation and developing policy are essential to farmers and agriculture.

He also is a proponent of education having been an Ag in the Classroom presenter for more than a quarter of a century. This is the first year he missed talking to third graders about field corn due to pandemic restrictions.

When Steve was elected president he said he wasn’t doing it for himself, but with the support of the 17-member board. “I hope to accomplish things as a board and continue to build on the good relationships that are already there. With communication we can function effectively and efficiently,” said the Farm Bureau president.

Steve Bemis has always wanted to be a farmer. Growing up he especially liked raising beef cattle and horses.

Steve studied agriculture at the University of Illinois graduating in 1984 with a bachelor’s degree in agricultural economics.

The college graduate returned to the family farm only to realize that the ‘80s were some pretty tough years for agriculture. With a college degree in hand, his mother asked him, “Are you sure you want to do this?”  Well, he did and has no regrets.

The Bemis’ raised beef cattle and row crops for many years, but eventually quit feeding cattle in the mid-1990s.

Jerry retired from farming a few years ago and now Steve is bringing his son-in-law, Jake Wright, into the farm operation. “Farming has been good for me. And it’s nice to have a son-in-law to transition our farm,” explained Steve.

Today they grow corn, soybeans and wheat on 2,600 acres in rural DeKalb with the help of their seasonal employees: Hank Frazier, Bob and Brad Russell. Their home farm on Gurler Road is in the center of the farmland which they grow crops, within six miles of their farm base.

Steve, 58, is a fifth generation farmer who appreciates that the home farm is registered as a Centennial Farm, having been in the Bemis family for more than 100 years.

When Steve’s not farming, in the summertime he enjoys their nearby family pond that lets him kickback and relax or a good game of golf.

Then when his girls inherited his height and talents they, too, were into sports – softball, basketball and volleyball. And before long Steve was coaching several of their teams.

Emily, 26, and Heather, 23, reside in Chicago. Emily is a project manager for TMC, a division of C.H. Robinson. Heather is a forensic accountant for Meaden & Moore.

Courtney, 25, is married to Jake Wright, who played basketball at Miami of Ohio and UW-Milwaukee. They reside in Glen Ellyn. She works as a strategy consultant at Grant Thornton in Chicago and Jake works on the family farm and for the Shoot Away Company.

“Competitive and reliable” are two traits which best describe the sports enthusiast and farmer. Putting it simply, he says, “I like to farm and I like sports.”

As he looks north from his farmhouse, Steve sees his growing corn field that butts up against the I-88 toll road. Off in the distance is Northern Illinois University. And right down the road a few miles to the east is the new Facebook building which is being constructed on the farmland which he once farmed. Change happens, notes Steve. And he’s part of the change in agriculture and in Farm Bureau.

A Change in Leadership

Mark Tuttle turned the Farm Bureau gavel over to Steve Bemis on March 29 after having served for nine years as DeKalb County Farm Bureau president.

“I have been honored to be president,” said the outgoing leader. “DeKalb County Farm Bureau is one of the strongest, greatest boards I’ve been a part of.”

The Somonauk farmer has been on the Farm Bureau Board for two decades, since 2001. During that time he served on the Executive Committee and held the offices of secretary, vice president and president. He served as the organization’s 15th president.

The primary reason for stepping down as county Farm Bureau president is because Mark currently serves on the Illinois Farm Bureau (IFB) Board of Directors for District 1, representing DeKalb, Kane, Lake and McHenry counties. He was elected to the state board in December 2019.

“DeKalb County Farm Bureau is in good hands with leadership and staff,” said Mark. “My thanks to all of them for their support.” Farm Bureau thanks Mark for his dedication to the organization which helped strengthen Farm Bureau’s role and influence in agriculture.