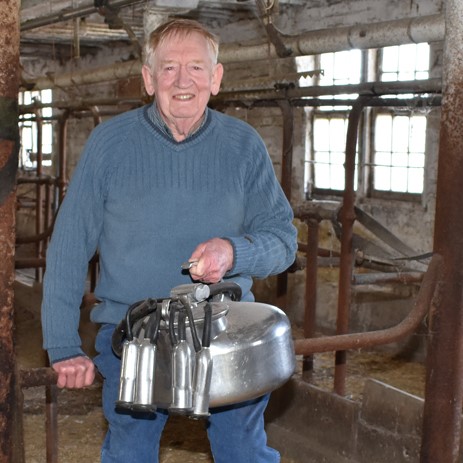 For most of his farm life, Bill Lenschow got up at 4:30 every morning to milk his cows. It was a daily routine for him and his family, to milk their dairy cows each morning and evening.

“I liked it because it was something the whole family could do,” said Bill. He and his wife, Kathy, and daughters spent countless hours with their Holstein cows in their century-old dairy barn. “We all had a part in it. Everyone pitched in. We all milked, fed and took care of the cows.”

Hundreds of dairy cows occupied the Lenschow’s stanchion barn year-round, but during the summer the black and white cows spent their days out on the lush green pastures atop a hill overlooking Blue Arrow Farm northeast of Sycamore. 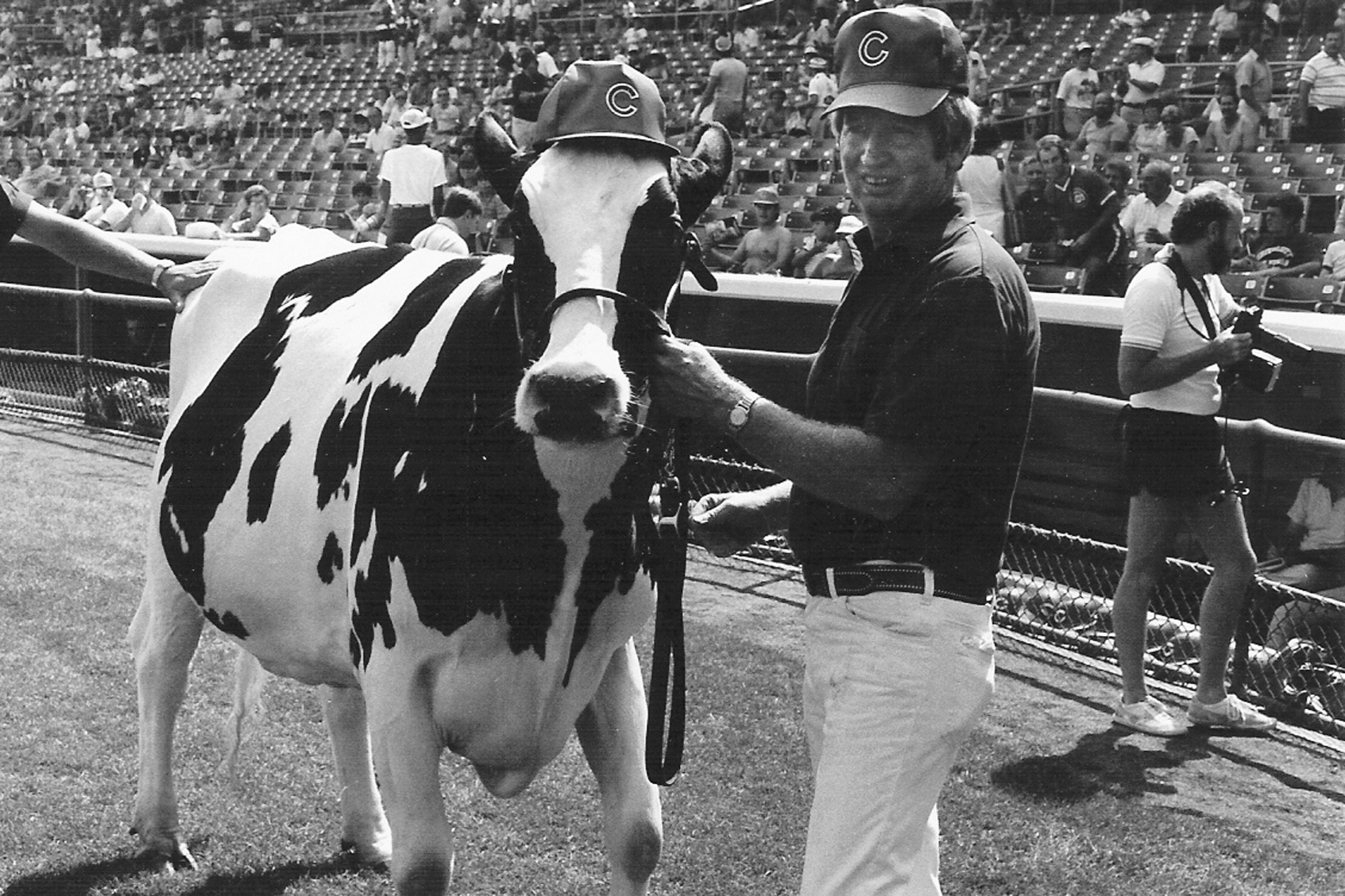 Bill Lenschow hauled some of his show cows to Chicago for special events, such as a Cubs game at Wrigley Field. He was often contacted because of his leadership in state and national dairy organizations for several years.

Blue Arrow Farm got its name from Bill’s father who found a blue Indian arrowhead on their farmland. Blue arrows are uniquely incorporated into a custom designed barn quilt mounted on the south side of their dairy barn which faces their traditional white farmhouse.

The Lenschow family has been farming Blue Arrow Farm for 122 years now. Bill, a fourth generation farmer, beams with pride of his farm and family heritage.

“My goal in life was to run Grandpa’s farm,” explained Bill, who has been farming it since 1959.

The Lenschows milked as many as 170 cows in the height of their dairy days. They also showed their top cows and calves at county fairs and Holstein shows – many of their bovines were champions. And some of their cows became famous as they were hauled to Chicago for guest appearances at Wrigley Field, the History Museum, Ravinia and other special events.

In 1984, Bill Lenschow was named a Master Farmer.

As a lifetime dairy farmer, Bill says the three biggest advancements for the dairy industry were: the refrigeration of milk, artificial insemination (AI), and a total feed mix ration. Refrigeration allowed milk to be cooled properly and transported greater distances. AI perfected genetics in breeding. Using a nutritionist, dairymen tested their feedstuffs and controlled nutrients in feed rations.

“Dairy farming really changed in the 1970s with technology,” continued Bill. Their farm added a pipeline for moving milk automatically from the milking units in their stanchion barn to the bulk tank in the milk house. And, their cows were some of the first for experimenting with embryo transplants.

Being a dairy farmer, Bill Lenschow kept plenty busy. But he made time to be involved in farm and community organizations and became an effective leader. “It all started with Farm Bureau and Young Farmers,” explained Bill. 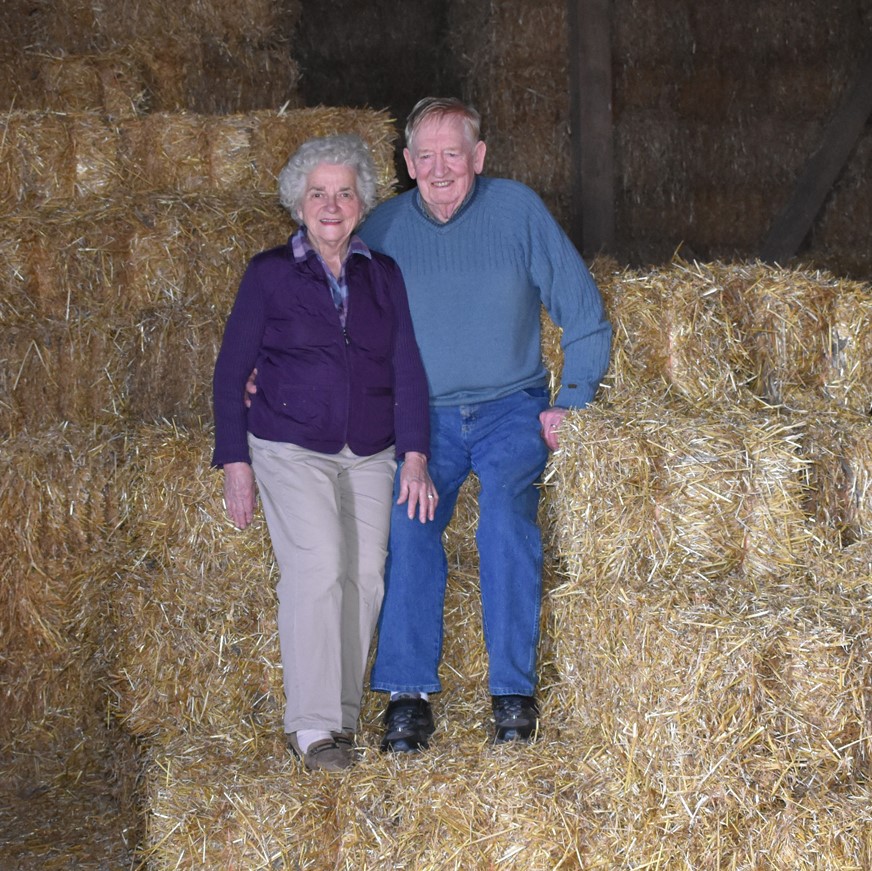 Bill admits he couldn’t have held leadership roles without the support of his wife and daughters. Bill and Kathy worked side-by-side on the Lenschow dairy farm.

Only a few years into farming Bill became interested in Young Farmers, a Farm Bureau group for young people. After having been active in 4-H and FFA, it was the next ag-related organization that sparked his interest.

It wasn’t long before the Sycamore farmer extended his leadership to serving on the DeKalb County Farm Bureau Board of Directors. “The three leaders who were most influential to me were Howard Mullins, Paul Montavon and Dean Lake (Farm Bureau past officers). I learned early on that you never got anywhere alone, someone helped you,” Bill said. He was a Farm Bureau Director for 10 years.

His leadership progressed to state and national dairy organizations including being vice president, later treasurer, of the Associated Milk Producers, Inc., Illinois Milk Producers Director, and Dairy Council of Wisconsin President. He also was a member of advisory boards for the Illinois Department of Agriculture, USDA, and the University of Illinois. 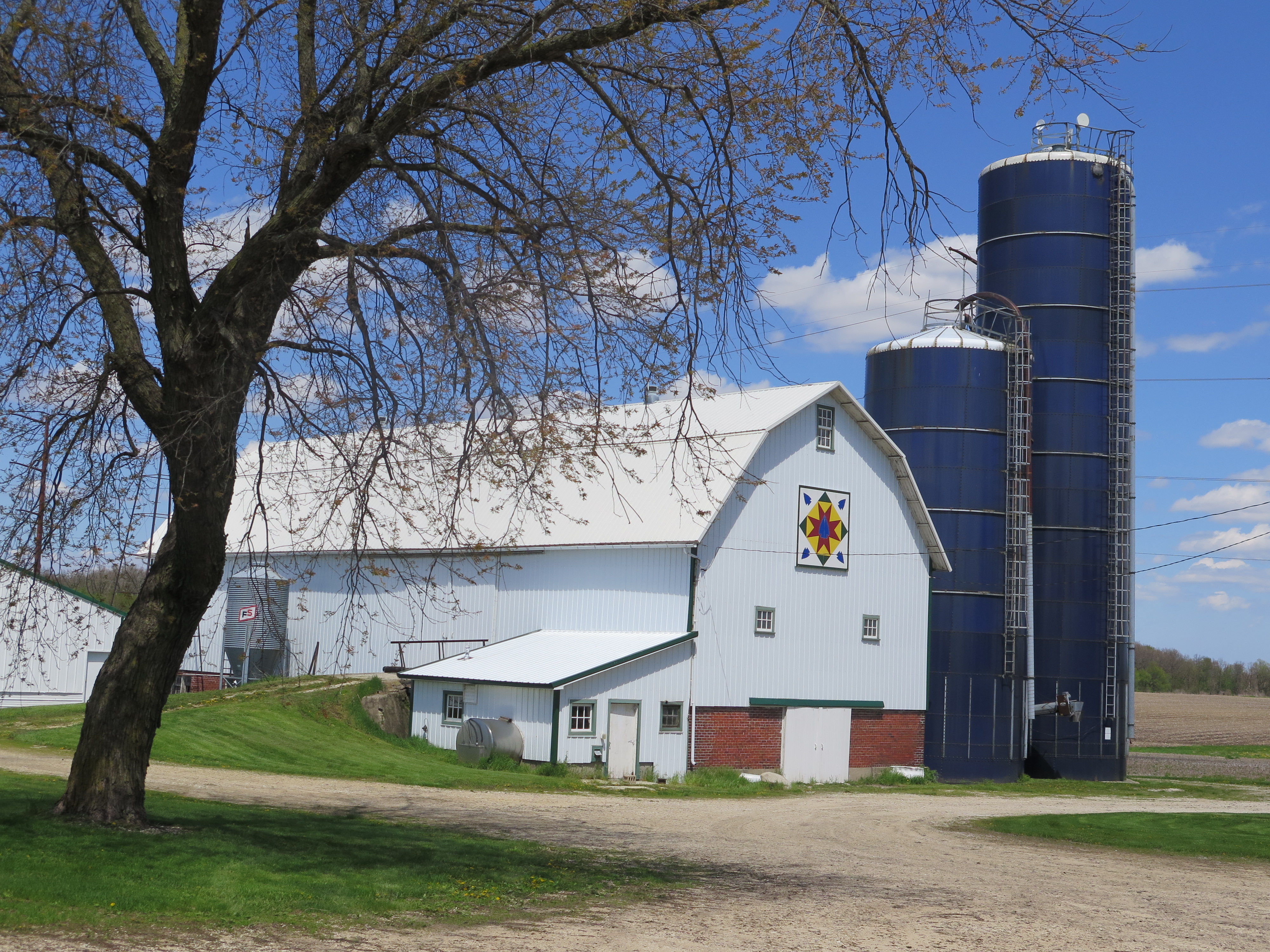 In his dairy leadership, he traveled extensively to help set milk prices for dairy farmers as part of the cooperative system. “Dairy farmers like milking, raising cows, and supplying milk for others. But they want to be paid a price that covers their costs,” said Bill. He traveled to more than 20 states to lobby for a uniform and fair milk price for farmers.

He met with dignitaries at state and national levels and testified before Congress on behalf of dairy farmers.

A few of his favorite memories were when he had milk and cookies at LBJ’s Ranch and another time when he personally visited with Barbara Bush.

“I spent many years helping the dairy industry,” said Bill, which he enjoyed, but still relished the moment he returned home. “When I walked in the dairy barn and got swatted with a cow’s tail I knew I was back home.” He was able to be a leader in the dairy industry due to his family being on the home front to milk cows.

One of the highest honors for Bill was being named a Master Farmer in 1984 by Prairie Farmer magazine, based on exceptional community service and farming. Then, Bill stated, “People have given me the opportunity to become involved and provided leadership experience as well as the opportunity to farm.” (DeKalb County Farm Bureau Point of View newspaper, March 1984)

From Dairyman to Historian

Dairy cows were a big part of Bill’s life up until a few years ago. “It’s an adjustment,” claimed the retired dairyman. “You are used to getting up at 4:30 and you don’t break those habits easily. But now I have more time to enjoy the grandkids.” 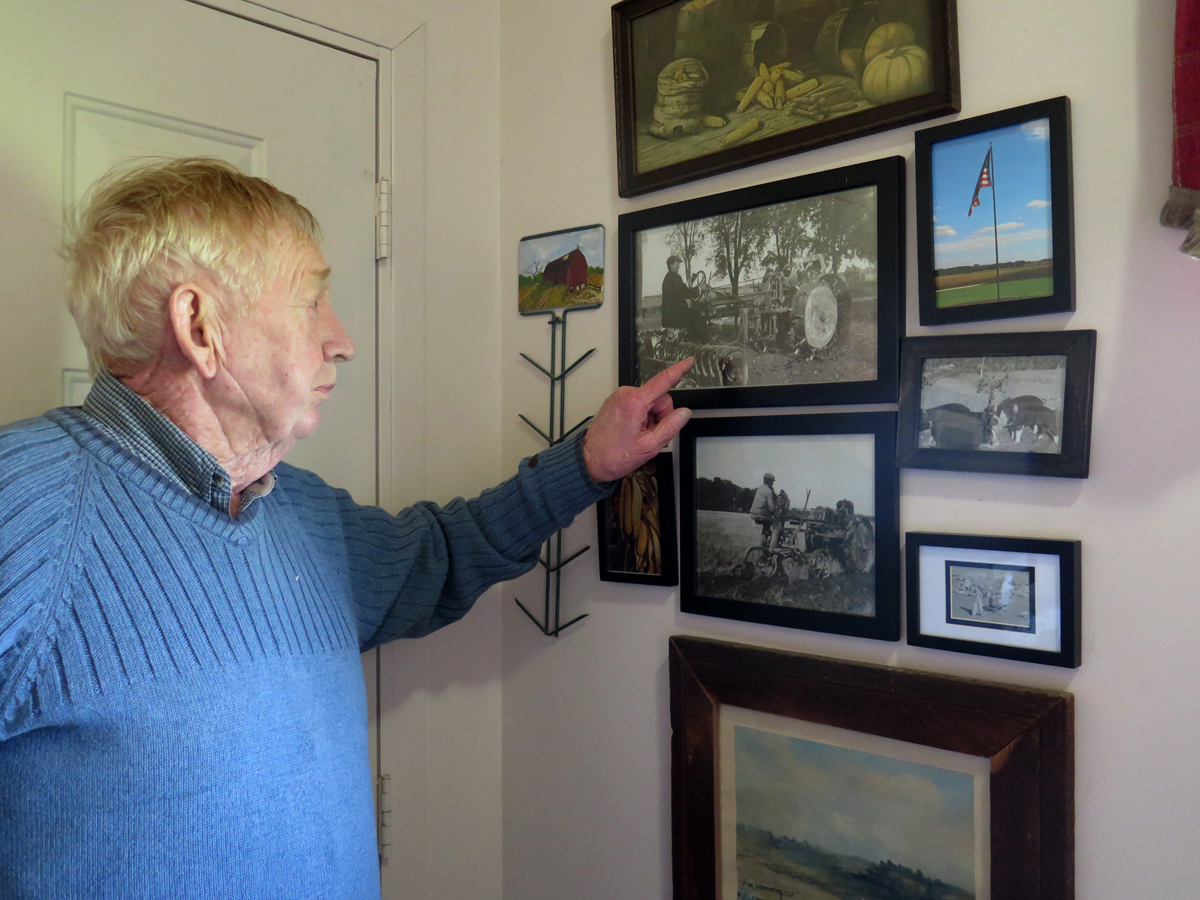 Bill sold his cows and put away the milkers for good. Even though he’s not dairying today, he still grows crops on his farm at the age of 82.

Beyond the corn fields, Bill appreciates his family’s history. He remembers being a young kid and driving the team of horses with the bundle wagon while threshing grain in the 1940s. He has a photo of his grandfather driving his first steam powered tractor in 1910. His family once farmed the land that is now occupied by Sycamore Middle School.

He enjoys looking through century-old farm documents or reading minutes from the Sycamore Farmers Club dating back to the early 1900s or looking at old family photos with his wife, Kathy, of 60 years. 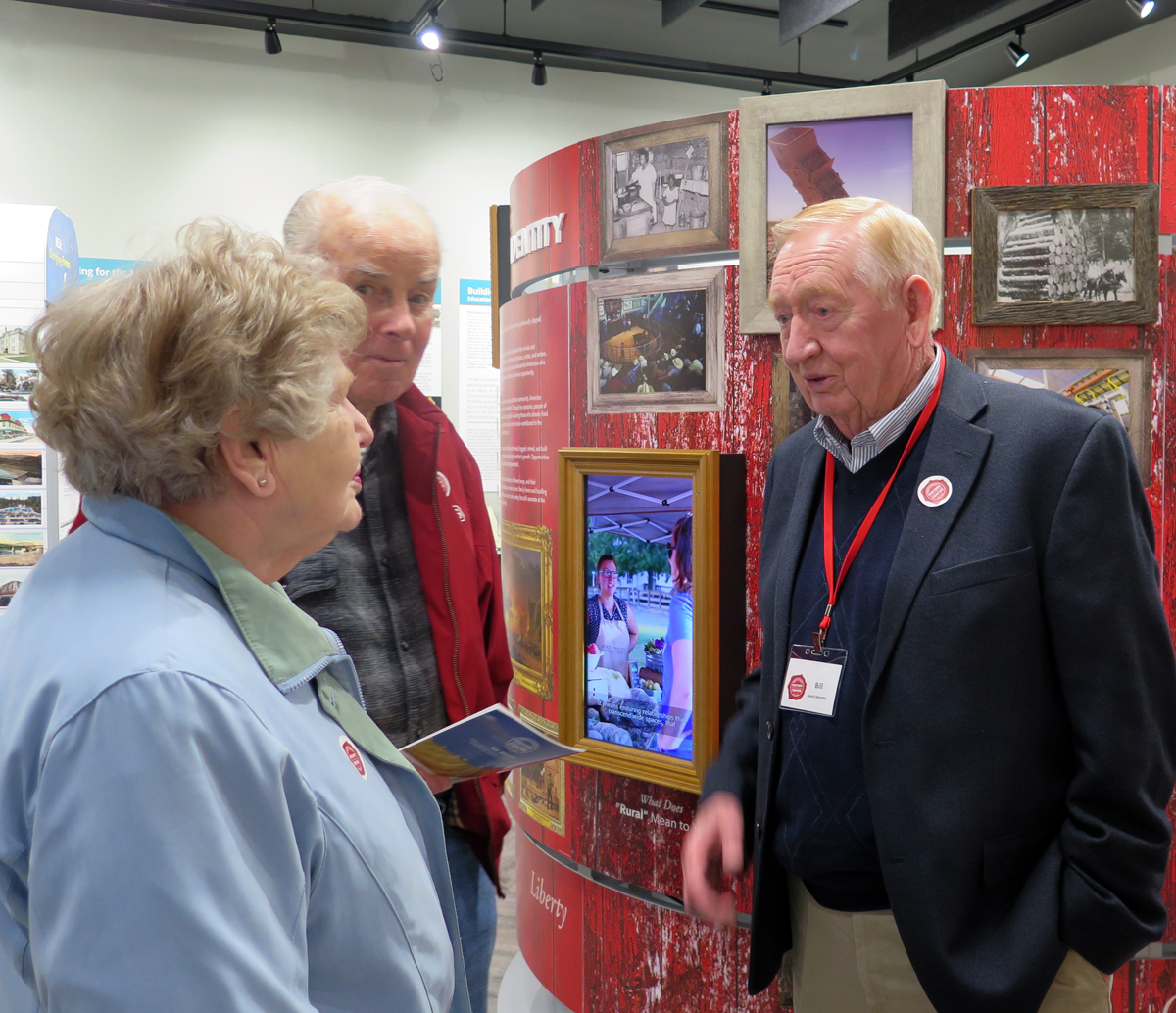 Preserving rural history is important to Bill Lenschow. He serves on the DeKalb County History Center Board and welcomed visitors, like Carol and David Keneway, to the new center located in Sycamore.

Bill and Kathy share old farm stories with their children: Susan Crull of Monroe, Wis; Lynn Paulus of Lincoln, Ill; Kim Winkelmann of Oakford, Ill; and Debbie Bednarek of Elkhorn, Wis. along with 14 grandchildren and 7 great-grandchildren.

Preserving the rural history of DeKalb County has been Bill’s latest passion. The Sycamore farm historian currently serves on the DeKalb County History Center Board and recently welcomed people to the new History Center. “If we don’t tell the stories of the county, we will lose this history,” he said. “We are so fortunate to have this new center.”

Bill continues to be “rooted in his community” and “stays close to home.” He smiles when he thinks about all the good things in his life, especially “hearing the laughter of grandchildren.”