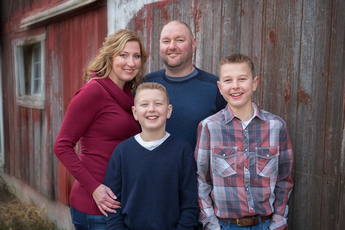 Answer: We use a variety of soil conservation practices such as strip-till, no-till, reduced-till, cover crops, and grassed waterways to prevent soil loss/erosion and preserve soils.

“Essentially, all life depends upon the soil … There can be no life without soil and no soil without life.” Charles E. Kellogg

As DeKalb County farmers we are truly blessed. We are here mostly through the foresight of our forefathers who sought opportunity and found some of the most fertile farmland in the world.

Yet the story of our rich farmland goes back thousands of years with the retreat of the glaciers that carved our landscape. As the glaciers retreated, they left deposits behind creating the base of our existing landscape. As the wind blew, it brought with it the loess from the west, some of the most mineral rich materials in the world. As the world warmed from the ice age, giant seas of prairie grass grew providing centuries of organic matter to our lands.

With the presence of the Mississippi River system to transfer agricultural commodities out of this area, so developed one of the few dominant agricultural regions in the world. The Midwest is only one of the few places in the world that offer this combination of fine soils, climate, and a natural waterway stystem for transportation. As this is the case, farmers have been entrusted with one of the most valuable commodities on the planet.

We are stewards of this land, this soil, and its promise for the next generation.

Tillage is the primary mode of soil loss. To loosen the soil and remove the former plant material, or residue, that protects it makes it vulnerable to the forces of nature. Residue and roots hold soil in place making it dramatically less vulnerable to wind and water erosion, or the wearing away of the soil.

With the advent of no-till and reduced-till practices in the 70’s and 80’s many farmers adopted farming systems that drastically reduced the amount of soil loss. On our farm we use all the tools at hand to invest and build the soil. We use strip-till, no-till, and reduced-tillage as a primary means to stop from “losing” soil.

Essentially, we are disturbing as little soil as possible and when we do, we are trying to leave residue on the surface to act as a mulch. This residue protects the soil, providing natural weed control, and preventing the soil from drying out. With these methods we can minimize the impact that growing crops have on the soil.

Another component of this loss prevention is the adoption of cover crops. These crops protect the soil, cycle nutrients from the atmosphere, and increase the amount of biological activity in the soil. A cover crop is typically grown when a “cash crop” is not, but that is not exclusively the case. Cover crops are becoming more and more prevalent, but we are also far enough north that it can be difficult to establish robust cover crops in the time that we have after the crop is harvested and before they go dormant.

Another effort that farmers utilize is the establishment of grassed waterways and CRP (Conservation Reserve Program) acres. Whereas farmers may use low or no-tillage methods and cover crops to prevent loss across the cropped acres of land, farmers also utilize grassed areas that safely conduct the confluence of water to traditional streams and rivers. CRP also partners with farmers and landowners to set aside the most sensitive acres that are vulnerable to erosion and loss.

The soil is the foundation of our profession. Every farmer has an obligation to preserve and protect this great asset for future generations. I am proud to be part of a culture that acts as guardians and stewards of such a precious gift.