It’s been a trying year for farmers and now their property assessments are going up.

DeKalb County farmland assessment changes for 2019 have recently been published. Farmers will find that the assessed values on their cropland have increased from the previous year.

How and why did this happen?

According to Brenda Matherly with Illinois Farm Bureau, the simple explanation is that the Illinois farmland assessment law changed. 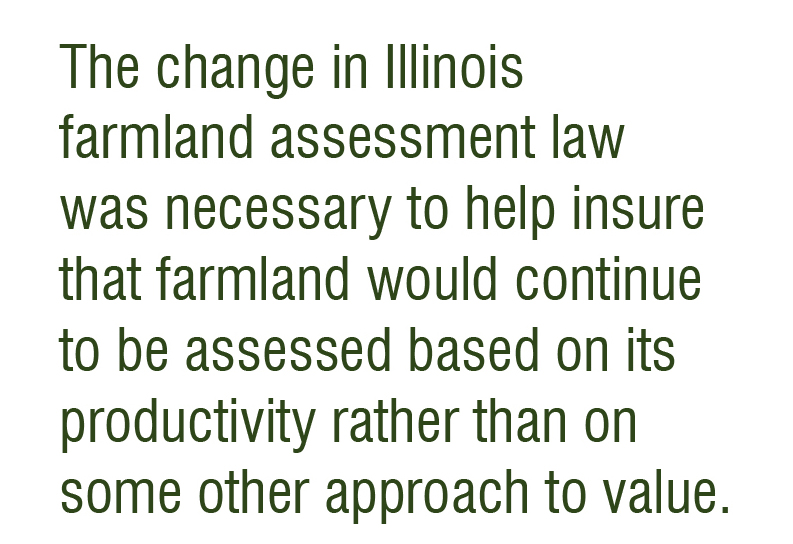 In 1977, the Illinois Farmland Assessment Act was enacted to value farmland, for taxation, based on its ability to produce income rather than its market value. An assessed dollar value was assigned to each soil type based on that soil’s potential to produce a crop, known as its “Productivity Index (PI).”

The farmland assessment formula, written in the law, produced “Calculated Values” that historically reflected yield variations from the highest to lowest production soils. Most years the yield ratio has been somewhere in the ballpark of 2:1 between the highest (130 PI) to lowest (82 PI) producing soils.

In 1986, the law was amended to limit increases/decreases in assessed value for each soil type. That limit was not to exceed 10% per year, per soil type. Taxing districts supported this change to help limit large annual swings in their tax base and to provide more stability in the budget from year to year. This 10% limit created values known as “Certified Values.”

Between 1986 and 2013, the 10% limit continually increased the gap between the “Calculated Values” and the “Certified Values” for each soil type. This also created an inequity in values between the highest and lowest producing soils. Rather than the formula’s historic balanced ratio, the gap between highest and lowest soils grew to a 40:1 ratio. That type of discrepancy in value was not reflective of yields between those soils.

The Illinois Department of Revenue (IDOR) recognized that a substantial change was required to correct the assessed values of farmland. If nothing was done to fix the system, increased pressure from taxing districts, and others, could jeopardize the continued viability of the Farmland Assessment Act. A return to assessments based on 1/3 of market value would economically devastate many farm operations.

In 2013, the IDOR introduced a bill that was passed by Illinois General Assembly. This new legislative change will eventually bring the “Certified Values” closer to the “Calculated Values” required by the actual farmland assessment formula. In other words, it will restore the formula’s equitable ratio determined by soil productivity. However, it will take several years to accomplish that balance.

The median cropland soil PI in Illinois is a PI 111 and the assessment change will be limited to no more than 10% of PI 111’s prior year’s “Certified Value.” The average PI for DeKalb County soils is 123.

Rather than immediately adjusting assessments to reflect the formula’s “Calculated Values”, this method will adjust the values gradually over time. The less productive soils will see the greatest impact and will likely see adjustments over a longer period of time.