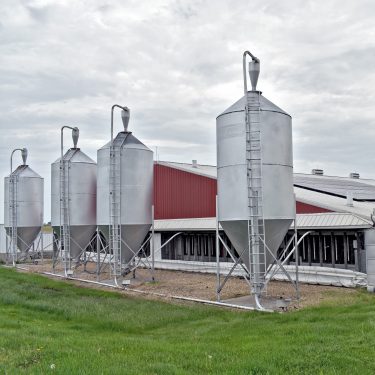 Ron Ness planned to ship a load of pigs to the JBS meat plant in Beardstown in April. But couldn’t.

His load of pigs wasn’t accepted because they were lighter in weight than other loads under contract with the meat packer. And the plant was starting to get behind in processing meat due to the COVID-19 pandemic.

Pork producers across the country were scrambling to get their pigs to market. When COVID shut down packing plants or reduced their capacity to process pigs, farmers had to look at alternative options like finding other facilities for the market ready pigs or even euthanization.

Ron did not have to resort to these options but instead was able to slow the growth of his pigs by adjusting protein in their rations and boosted the building’s temperature from 65 to 75 degrees to diminish their appetite. So he kept his 250-pound pigs in his barn and made slight adjustments so they would be ready to ship when the meat plant could take them.

“Our biggest impact of COVID was being able to ship pigs,” said Ron. “Some packing plants closed and others were running under capacity, based on their employees testing positive for COVID.”

The Hinckley pork producer stated that JBS is now running at 75 percent capacity, which still is causing shipping disruptions. Farms under contract with meat plants are geared up for regular shipments of pigs as part of their pork production cycle.

Pork farms have taken a big hit with delayed shipments of meat and crashing pork prices. The National Pork Producers estimated farms were losing $37 per pig this spring.

Ron said he had previously forward priced some of his pigs to protect himself from price declines and huge market losses.

He’s also a partner in Pipestone’s sow center system and has been in discussions about slowing down breeding to offset the overproduction of pork. He gets his weaned pigs from the local sow centers and feeds them with the corn he grows on his farm to a market weight of about 280 pounds.

Ron says “It’s not my first rodeo” having raised pigs for 50 years now. He’s experienced the “ups and downs” in pork production but states that it’s not as predictable with today’s vertical integration. “This year will be one of those down years – with below breakeven pork prices.”

At the Heinsohn Dairy Farm in rural Kirkland, they had no choice but to limit milk production when their milk marketing cooperative, Dairy Farmers of America, told them they wouldn’t be compensated at the full market value for 10% of their milk.

“Our solution was to cull about 30 cows from our herd, which dropped our milk production by 10%,” said Jonathan Heinsohn, the family’s dairy farm manager.

The farm typically culls cows from their mostly Holstein herd, but acted on it earlier this year based on a downward milk market due to restaurants and schools closing.

Milking 300 dairy cows now, they also were hit with tanking milk prices – before COVID prices were $18 per hundredweight and by April were $10 cwt, explained Jonathan. To put it into perspective, they were slightly breaking even before the coronavirus and now are losing milk money.

“We’re a strange breed of people in agriculture,” said Jonathan. “What other business do you know that loses money and still remains in business?”

What has kept them in business is diversifying their farm operation. They market their cow’s breeding genetics with sales of embryos and calves. Plus, they have transitioned from traditional row crops to organic crops. Jonathan works closely with his two brothers and father as their farm diversifies.

Fortunately during these tough times in the dairy industry, the Heinsohns have not disposed of any milk like some dairies resorted to during the pandemic.

“We are uniquely positioned for just about anything,” said Jonathan. “We have survived three farm fires, a tornado and lightning strike so I guess you could say COVID is just another disaster and we will get through this too.”

One of the forward-thinking things which Jonathan did before COVID hit was to order months worth of extra dried distiller’s grains (DDGs) and a large supply of minerals as part of their feed mix for their cows.

Another saving grace for the dairy farm has been government aid through the Dairy Revenue Protection Program, and most recently the Coronavirus Food Assistance Program. “It helps some, but I’m not sure it’s enough,” said Jonathan.

The ethanol market is significant to Paul Taylor’s farm because he sells all of his corn to the ethanol plant in Rochelle.

When the COVID-19 pandemic hit in March, Paul knew it would have a dramatic impact on his corn production.

The demand for ethanol fuel crashed. Some ethanol plants closed and others decreased production. In Illinois, ethanol production is down 38 percent since March, according to the Illinois Corn Growers Association.

“The impact for me is that it adds another fret factor and clouds my planning,” said Paul. “I’ve got a marketing plan in place for pricing my corn for ethanol sales but it still concerns me.”

Paul claims this year reminds him of the early 1980s “with a predicted outcome that is scary.”

“In agriculture, we have a history of producing too much. Case in point, a potential 3.5 billion-plus bushel carryover of corn,” stated Paul. “The big three uses of corn are for livestock feed, ethanol and exports. Exports are crucial to agriculture but we have lost some of those major markets with countries like China.”

The Esmond farmer has seen it before with disruptions in trade in a half century of farming.  “It’s like lipstick on a pig changing colors, from grain embargos to tariffs to COVID,” Paul mused.

But he’s an avid supporter of the ethanol market, having made several trips to DC lobbying for this renewable fuel in leadership with the state and national Corn Growers. “We need to be looking at what that the next big market is for corn. Ethanol, as a demand driver, has been one of the big markets. And we need to continue to work with the automobile industry, Department of Energy and the EPA.”

Currently, one-third of field corn is used in ethanol production. Paul hopes the ethanol market will grow for E-85, E-10, E-15 and other fuels with higher octane standards and higher blends of ethanol. “But realistically, ethanol has a rough road ahead.”

Paul’s optimism is being tested with the COVID pandemic and the dismal farm economy. In the 50 years he’s been farming, he cites about 10 years were “really profitable.”

“I ask myself if farming doesn’t straighten out how much more financial hemorrhaging can I withstand and not cut into my retirement nest egg?”

Alan Adams is typically an upbeat guy who looks forward to working
on his cattle farm every day. But the last few months have been trying.

“It’s been frustrating to have cattle ready to take to the meat plant and be refused,” said Alan. “As cattle feeders, we are all struggling to get current bids and get our cattle moved.”

In March, Alan had sold a load of cattle to the Tyson meat plant in Joslin, IL and was ready to take delivery. But the packing plant was not working at full capacity due to the COVID-19 pandemic. The coronavirus was threatening workers that the company relies on to process and inspect meat. And, in turn, it created a backlog in fat cattle.

The fact is that “it’s hard to slow down beef cattle,” stated Alan. He conferred with his animal nutritionist and together they agreed that it’s not in the best interest of the steers so his 1,400 pound cattle grew to 1,500 pounds before he was able to finally ship them one month later.

The pandemic hammered livestock prices and raised concerns over keeping beef on grocery store shelves. Before the virus live cattle were selling at $1.20 per pound and then fell to 90 cents, explained Alan.

The rural Sandwich cattle farmer said he “avoided the worst of low beef prices” with some aggressive pricing and was able to do a little better than breakeven.

“It’s been a difficult year because of COVID but not the worst year for raising cattle,” he said. 1974 was the worst year when prices collapsed followed by the 1980s.

Another pandemic setback for cattle feeders is the access to distillers dried grains (DDGs), the high energy protein content in cattle feed rations. With ethanol plants shutting down the DDG’s are not readily available. As luck would have it, Alan had recently purchased a silo full of DDGs before COVID.

Alan farms with his wife, son and daughter-in-law. They raise about 1,800 feedlot cattle a year and have a commercial cow-calf herd. Reminiscing about his nearly half century of cattle experience, Alan realizes that there have been many years when his cattle and corn commodities have been “variable.” 2020 was “not the year I was hoping for,” said Alan. “But there’s always next year!”