This commentary takes the form of a letter written in response to a “Perspective” which aired recently on local public radio station, WNIJ.

I often hear your “Perspective” essays on WNIJ. I enjoy your insights and your passion. Recently, though, I found myself disappointed by what you said about food and where it comes from.

You spoke of your urgency to harvest and preserve the produce from your gardens before winter. You mentioned that where your food comes from is important in your household. I so admire your thoughtful approach to food and its sources.

But you went on to use several “food buzz-phrases” that gave me pause. I’d like to address them one by one.

Industrial food complex – These three words seem intended to conjure a soul-less, uncaring, greedy, land-depleting, animal-torturing vision of agriculture—everything our family farmers (95% of farmers in the U.S.) do not represent. Why, though? Why would you suggest that farmers and ranchers who aren’t local or organic are part of a vast, nefarious network?

In twenty years of touring farms and agribusinesses, I have yet to meet someone who doesn’t care deeply about the environment and human health. Small or large, crop or livestock, organic or conventional, local or several states away—every single farmer I’ve met takes deep pride in their work and how they take care of their land. 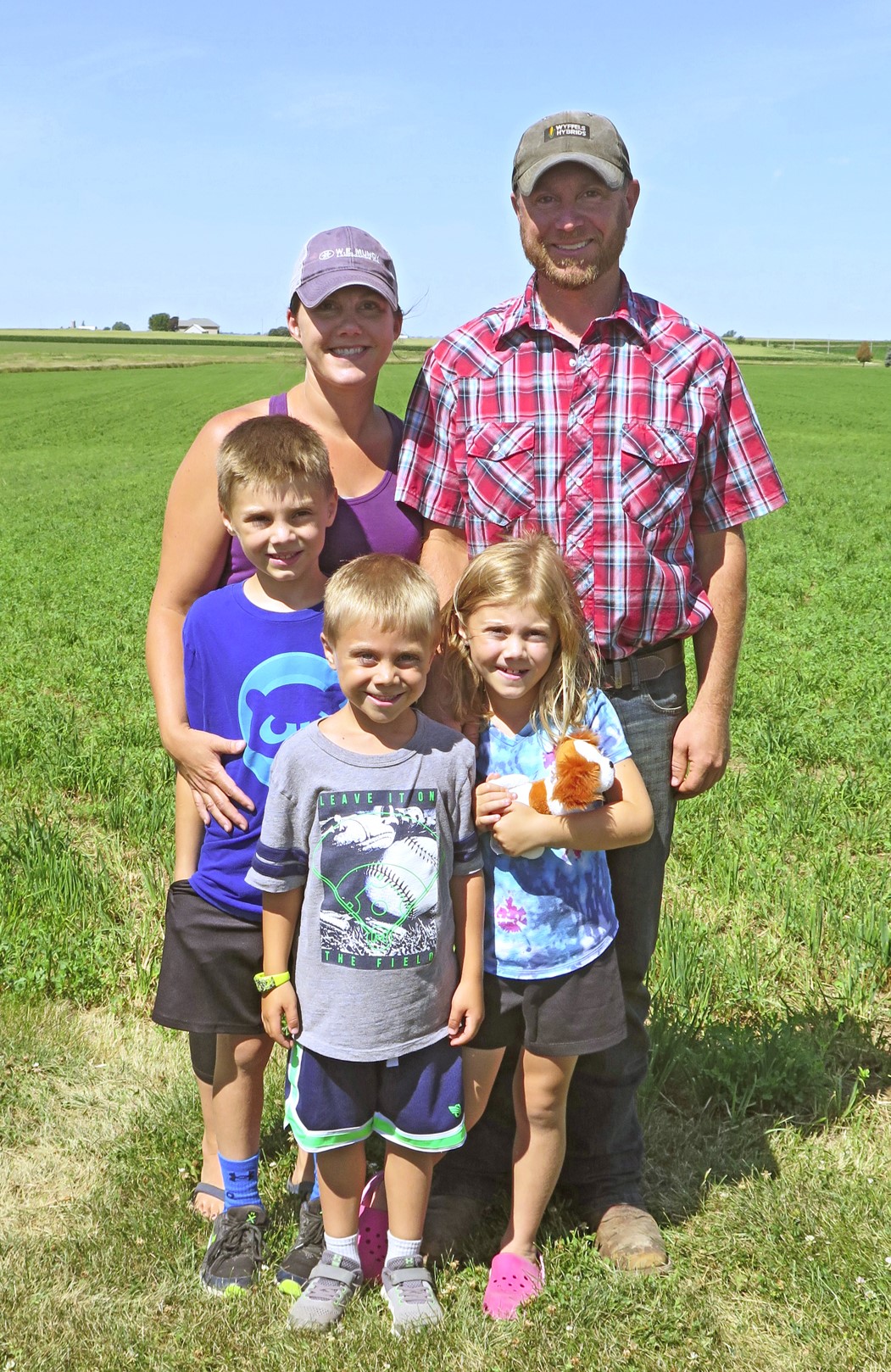 To characterize modern agriculture the way you did is unfair and inaccurate. The “industrial food complex” you speak of makes it possible for more than 99% of the U.S. population to focus on something besides day-to-day food production. We can be writers, doctors, scientists, artists, teachers, and engineers because of the small fraction of people who strive to safely and efficiently produce our food.

Fields saturated with pesticides – Then you dished out “fields saturated with pesticides.” You definitely elicited an emotional response from this listener! Perhaps you’ve seen ground-based or aerial applicators applying liquid products (likely herbicides or fungicides) to fields. The “spray” that you see is mostly water, used to disperse a small, precisely-calculated amount of product—on the order of ounces per acre. Agricultural crop defense is expensive. Applicators must be trained and licensed. Use is heavily regulated. Farmers do not waste money and risk crop and soil damage by “saturating” the land with chemicals. This is loaded, imprecise language which reflects and perpetuates myths and fears about modern agriculture.

Did you realize that by far, most of the pesticides (chemicals designed to kill other organisms) you ingest on a daily basis are naturally-occurring in plants? In fact, two of the 49 natural pesticides found in cabbage cause tumors in rats, as does the naturally-occurring pesticide in my morning tea: caffeine. Whether a crop protectant is human-made or natural, it’s the dose that makes the poison.

Processed foods – Canning and freezing garden produce at home is processing. I’ve toured facilities where fresh vegetables are sorted, washed, cut, cooked/frozen, and packaged, enabling me to easily make a pot of soup after a long day at the office. Heck, sometimes I’m so tired I skip combining ingredients and heat up pre-made soup instead! Yes, it is “processed.” But my family is nourished, and by not toiling in the kitchen I still have the energy to read and sing to my daughter before bed.

Local products – Local is an imprecise term when it comes to food, so specifying “local” as “indigenous to the area” was helpful, as was your example of not eating strawberries in the winter. I’m guessing food miles play a role in your decisions. Eating grapefruit trucked from Florida in January might seem sinfully luxurious. But you might be surprised by the per-grapefruit transportation emissions for a semi load of out-of-state fruit compared to fruit grown and purchased locally and transported in smaller quantities.

Some fruits can’t be grown locally. By consuming them, we can support family farmers who are far away, too.

Are you implying that Florida grapefruit and California strawberry growers should be limited to selling their produce only in their own local areas? An article by ag economists Jayson L. Lusk and F. Bailey Norwood, “The Locavore’s Dilemma: Why Pineapples Shouldn’t Be Grown in North Dakota,” fundamentally changed my thinking about local food. Check it out; they do a nice job of addressing the environmental, economic, and health implications of this trend. In the end, we should be promoting a diversity of fruits and vegetables in our diets, regardless of where they are grown.

Organic – Weeds, insects, and diseases (a.k.a. “pests) don’t stop at the edge of an organic field. They must still be controlled, by machine, by hand, or yes—even by spraying—for farmers to produce food. Organic farmers commit to using a more limited set of tools to control pests: in general, “naturally-occurring” fertilizers and crop protectants, mechanical tillage, hand-weeding, etc. By virtue of being “unnatural,” GMO seed is prohibited in organic production. Bear in mind, all forms of food production have their economic, environmental and social trade-offs, including organic farming.

GMO-sprayed field – Genetic engineering isn’t a spray; it’s a precise way of adding beneficial traits to a crop—traits that cannot be achieved by breeding. Herbicide and insecticide resistance traits do relate to spraying, in that the former allows crops to be sprayed with relatively mild herbicides that control weeds without killing the crop, and the latter reduces or eliminates the need to spray broad-spectrum insecticides. 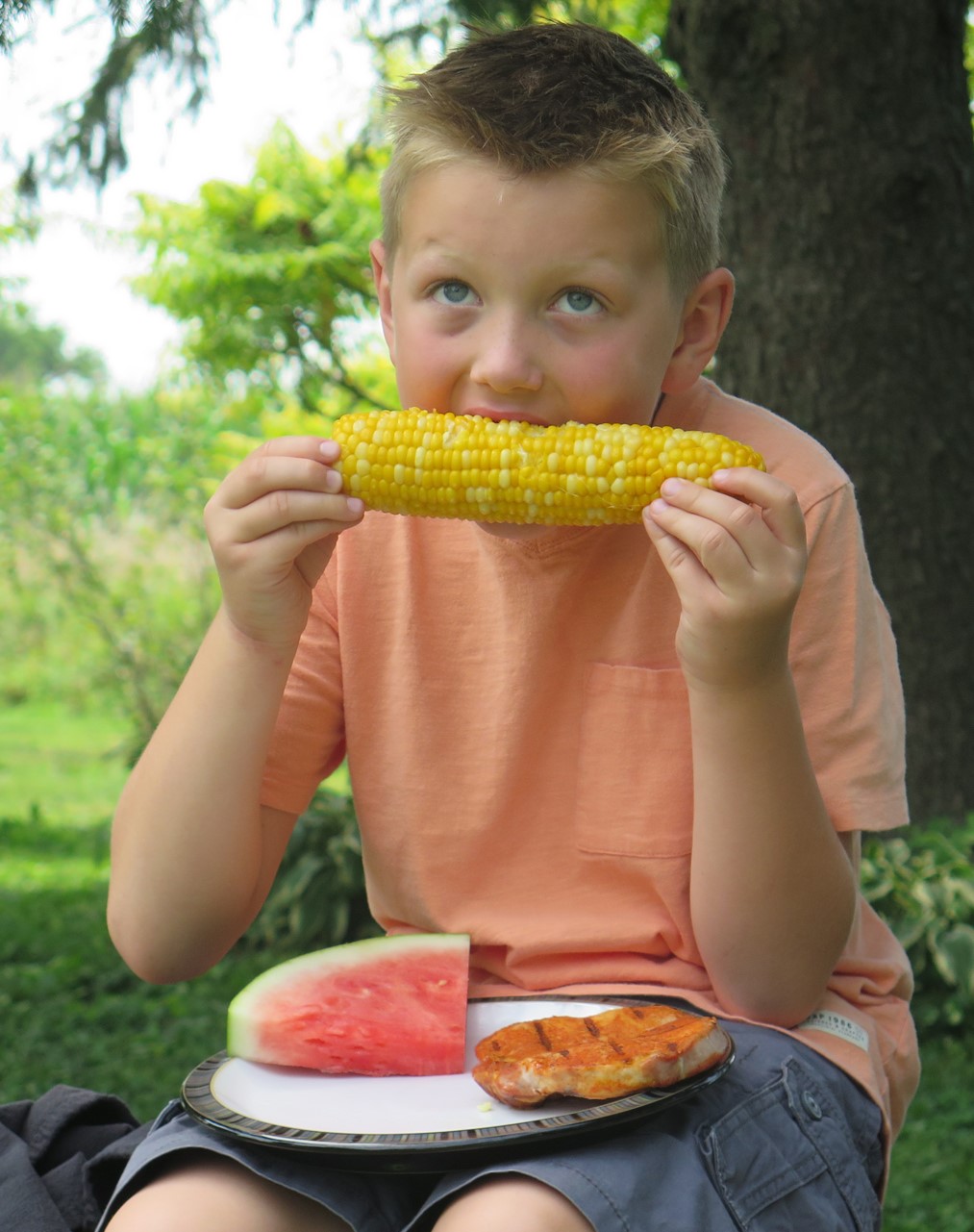 Locally-grown produce is amazing! But there is no need to reject fruits and vegetables produced by farmers elsewhere—where soils and climate may allow for more efficient production.

Also, grain farmers will assure you that deer do happily forage on GMO corn! Not to worry: More than 20 years of consumption by humans and animals, over 3,000 scientific studies, and nearly 300 science institutions worldwide verify the safety of available GMO crops.

Aside from the specific misconceptions perpetuated by your essay, I was taken aback by its elitist tone. “Eat locally and in season produce and stay away from GMO or sprayed foods,” you said. Even if there were compelling economic, environmental, or health reasons to abide by this rule, many families simply don’t have the means to do so given the higher price of local and organic produce. Adding unnecessary guilt to their burden is unhelpful.

As you emphasized in a previously-aired perspective, “Words did and do hurt.” With this recent essay, your words—loaded and inaccurate—hurt. They erode trust in the area’s agricultural producers.

I wasn’t able to put in a garden this year, so I won’t be joining you in preserving home-grown produce to prepare for winter. However, thanks to farmers—conventional and organic, large and small, local and across the nation, I too, will be able to feed my family safe, healthy food when cold weather arrives.

P.S. If you are interested in broadening your understanding of these topics, I would be happy to connect you with crop scientists and arrange visits to area farms!