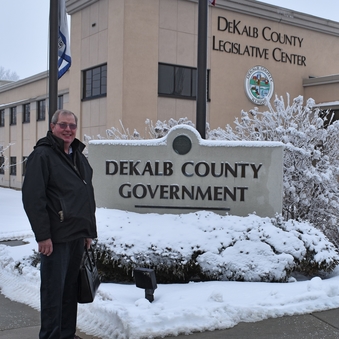 DeKalb County has a new leader who knows agriculture.

John Frieders brings a different perspective to the County Board as its recently elected chairman. The lifelong farmer understands county government and knows its actions can have a direct impact on agriculture.

“So much of what the county does affects agriculture,” said John. “From roads, to land use, solar/wind projects, zoning and property rights – these all impact our local farms.”

Agriculture is the lifeblood of this DeKalb County Board Chairman, a hog and grain farmer from rural Sandwich. The new chairman exudes enthusiasm for his leadership role and the opportunity to represent agriculture as well as other sectors.

“We have good agricultural representation on the County Board now and have in the past. Others not connected to agriculture also bring life experiences and expertise to our board,” stated John.

In December, John was elected chairman in a unanimous vote by the 24-member County Board comprised of 13 Republicans and 11 Democrats. He replaced former chairman Mark Pietrowski, who stepped down as chairman after six years.

John previously served as vice chairman for the past three years and has been a County Board member representing District 12 (Sandwich and Somonauk) for eight years.

John’s first County Board Meeting as chairman was held virtually this month, just like most of last year’s meetings due to the pandemic. The Zoom meetings work, but lack in-person conversations and being able to develop face-to-face relationships, noted John.

John and other board members are tasked with keeping a watchful eye on county government activities/finances and providing direction to 525 county staff.

“DeKalb County is doing well, all things considered. The county has its challenges but we will work through them,” said John. Most recently the county is in the midst of hiring a new County Administrator to replace Gary Hanson who retired.

“We’re also concerned about the state of businesses throughout the county during the pandemic. We want them to survive and flourish,” said the County Board Chairman.

With briefcase in hand, John goes to his office at the County Administrative Building in Sycamore about once a week or more frequent as needed. Otherwise he works from his farm office at his home on Pine Road. And when he’s not fulfilling his County Board responsibilities, you guessed it, he’s working on the family farm.

John, 64, farms with his son, Chris, and brother, Gary. One of John’s favorite farm chores is taking care of the hogs in their wean-to-finish operation and planting corn.

“When the pigs are doing well it’s a good start to the day. And when the weather is nice, it’s hard to beat a day of planting corn,” said the third generation farmer.

When John isn’t working he enjoys relaxing with his family. Sunday family dinners are especially heartwarming for him and his wife, Linda, a retired nurse. Their adult children all reside in the Sandwich area. Chris lives on the main farmstead, across the road from John and Linda’s house. Daughter Kari is a nurse at Northwestern Medicine, and the youngest, Emily, is a special education teacher.

“There’s a lot to being County Board Chairman,” said John. “I have a pulse for the Sandwich and Somonauk areas, but not Genoa or Sycamore. I know the issues differ throughout the county so I count on other board members for the pulse of their communities. That’s what makes the County Board work and I’m happy to be part of it.”

“During my term as County Board Chairman, the courthouse addition was expanded and completed in 2012 to better serve the county residents. Other major highlights were: Expand the fiber optic network throughout the county, increase the forest preserve acreage to keep ahead of the increase usage, and hire a new county highway engineer to better serve all the township road commissioners.

My top priority was that I was always working for the best interest of the taxpayers of the county.”

“As I began my tenure as Board Chair, the county set four goals: slow tax growth and seek property tax relief, look for ways to reduce the cost of government and cooperate with municipalities to plan regionally for growth, manage growth for minimal impact on farming and quality of life, and upgrade county facilities. With the board’s tenacity and staff efforts we achieved these goals.

After much study and planning, the county broke ground for new facilities for the County Health Department and Rehab and Nursing Center in 1998. A new Highway Department Building and Legislative Center were completed in 2002. The Board also decided to expand the County Jail at its current sight. The county also saw the formation of a new 570 acre state park and 356 acres added to the county forest preserve system. Other notables: consolidation of 9-1-1 centers, creation of the county Information Technology Department, and development of the county’s website.

During this period the County Land Use Plan was revised. A Regional Plan Commission was formed in 2002. The county also adopted a Unified Comprehensive Plan in cooperation with all the municipalities. All of this work was focused on orderly growth around existing communities and the preservation of farmland.”

“One thing I promoted as County Board Chairman was having no aisle between the Republicans and Democrats at County Board meetings. Instead members were seated in alphabetical order. I had a Republican on one side and a Democrat on the other side. I voted on issues, not based on party affiliation. If Springfield could do the same we would get more accomplished!

During my term as chairman we finished Peace Road, from Rt. 64 north to Rt. 23. We made Somonauk Road and Chicago Road a 4-way stop to prevent accidents. We also moved County Board meetings from the Courthouse to the new gathering room in the Administration Building.”

“During my chairmanship, the County Farm property was sold on Sycamore Road in 1994. The sale resulted in commercial development and a sales tax sharing agreement with the City of DeKalb brought property tax relief from the cost of the proposed new buildings (adding on to the Courthouse and building the new Health Department and County Rehab and Nursing Home).

The new 9-1-1 system became operational, which was a benefit to rural residents throughout the county in 1993. While these actions were beneficial to everyone in the county, all helped agriculture as well.”

Ag Connections:  I am recently retired, but did work full time. I worked 25 years for what was formerly Farm Credit Services and then went on to work at the DeKalb County Office of Assessments, which gave me some insight into farm lending and appraisals, and assessment practices. On our Somonauk farm, operated by my husband Dan, we raise corn and soybeans. We have a cow-calf herd and feeder calves. We also have a farm in Wisconsin where we also raise corn and soybeans.

Years Served on County Board:  Since August, 2019

Why is it important to have agricultural representation on the County Board? When you consider that approximately 90% of the 406,000 acres in DeKalb County is considered agricultural, I believe it is very important to have people on the board who have an agricultural background or understand the dynamics of farming and what that brings to the community.

Granted the majority of our population is in the municipalities, and we do have Northern Illinois University and Kishwaukee College, which contribute greatly to our county. But, because our county is so diverse, I believe all parts of the county must be represented fairly, including the agricultural community.

Years Served on County Board: First term, newly elected in 2020

County Board Committees/Chairmanships: Member of the Highway and the Forest Preserve Committees

Why is it important to have agricultural representation on the County Board? To make sure that any new developments that would fall under county jurisdiction will not negatively affect agriculture and the rural areas of the county while still encouraging economic growth in the county.

Townships Served:  Most of Sycamore and a small part of northwest Cortland

Why is it important to have agricultural representation on the County Board? Given the low ratio of rural to urban makeup of the County Board it is important for agriculture to be represented by members who can effectively give voice to the concerns and needs of DeKalb county’s farmers and rural residents.

Years Served on County Board: Since 2017

Why is it important to have agricultural representation on the County Board? As our population centers grow and the number of generations removed from the farm increases, having active farmer participation at the county level is very important. Although food production is considered necessary by most, some think we don’t need some types of farms “here.” Managing the use of some of the most productive soils in the world is an honorable task.

Even though the majority of our county lands are in ag production, people vote and not the acres. This will come to light as we work on redistricting using the new 2020 Census data. Our rural board members represent large sparsely populated land masses to equal the dense voter registrations in the municipal areas.