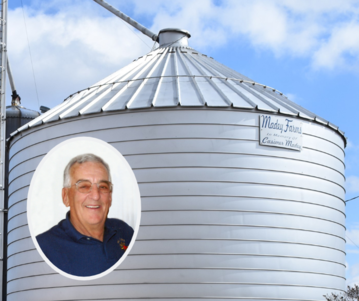 Grain entrapment is on the rise across the Midwest and it hit close to home when a DeKalb County farmer tragically lost his life in his grain bin.

Flowing grain is like quicksand. In four seconds you can be knee-deep in grain. Total grain engulfment takes a mere 20 seconds.

It was a beautiful spring day and in farm country farmers were planting corn. On this particular day, May 5, 2014, Leon Madey decided to haul some of his bin-stored corn from his Genoa farm to the nearby grain elevator.

At noon, Leon and his son, Mark, began unloading the first load of corn from the 25,000 bushel bin into their semi-truck. The truck was almost full when they realized the grain wasn’t flowing well and figured there were some parts of the bin that were plugged by clumps of grain. Leon knew there were plugs because he had been in the bin the day before.

Meanwhile, Mark finished filling the truck and turned off the grain auger. He looked for his dad but couldn’t find him. His next thought was that his dad had gone into the bin to break up the plugs of grain.

Mark immediately called 9-1-1, then called his twin brother Matt who in turn called his mother, Dorothy. Both Matt and Dorothy were on their way to work, but quickly turned around to come back home. Mark grabbed a shovel and rope, and climbed up the bin to rescue his father. He instinctively knew time was of the essence.

“I thought to myself he couldn’t have been that far down in the grain,” explained Mark, who entered the bin and was tied off while his brother Matt was spotting him. “I just kept shoveling and digging to try and find him.”

Several fire departments and rescue teams responded to the emergency call and wasted no time getting to the farm located on Genoa Road.

“I told my son, he promised me he wouldn’t go in the grain bin,” said an emotional Dorothy. Leon had gone into the bin the day before and Dorothy sternly told him, “You can’t do that. You have to promise me you won’t go in there again.” But he did. After all, he had been handling grain his entire farm life. Farmers have been inside their bins enough times to have a false sense of security.

As a farmer, Mark recognizes that “it’s a necessary thing to move grain.” “Unfortunately, Dad didn’t have the proper tools to do the job.”

Hundreds of emergency crew members, neighbors and farmers helped in the grain rescue with manpower and equipment. The fire department cut holes in the sides of the bin to allow the grain to escape, which required moving grain by hand, with tractors and trucks. Leon’s body was recovered after four hours.

Losing a farmer to grain entrapment is a travesty. Other farmers who assisted in the recovery of Leon Mathey learned a hard lesson at the sake of losing a good friend.

“He knew better,” said Dorothy. “His farmer friends still think about the accident and now say they will never go in a bin and put themselves in that situation.”

Why did the accident happen? Mark explains that in 2014 there were some of the same grain quality issues that farmers are facing this year. “Plugs of grain, holes, crusting, cones and soft spots. If you are in the bin with these conditions, there’s no telling what can happen.”

“Once a ledge of grain breaks, it’s a funnel-like effect; picture an inverted pyramid. Moving corn is like quicksand and it sucks you in.” It was heart-wrenching for Mark that his dad was recovered standing straight up ten feet from the bottom of the bin floor. He had suffocated in grain.

“Everyone who was there will never forget it. They learned a life lesson witnessing the death of a friend,” said Dorothy.

Dorothy and Leon were high school sweethearts and had been married 51 years. They had a special 50th Anniversary celebration the year prior. Dorothy farmed alongside Leon until their sons were old enough to farm. Later, Dorothy became a realtor and helped on the farm as needed.

Dorothy and Mark share their story of losing their husband and father to create heightened awareness of grain bin entrapment, reminding farmers “to be more careful and stay out of grain bins.”

“We hope to raise awareness that others will pay closer attention and be safe while farming. And use proper equipment (harness, rope, spotter) if they absolutely need to go into a bin,” said Mark.

Six years ago this grain accident took the life of Leon “Lee” Madey, 72. He was a husband, a father of four adult children and six grandchildren.

“What hurts your heart is he loved farming,” said Dorothy. “It’s unfortunate we lost him this way.”

When Dorothy hears of other grain bin deaths she prays for the family and heartache they are facing. She lived it. “There’s nothing anyone can say. It’s a terrible loss.”