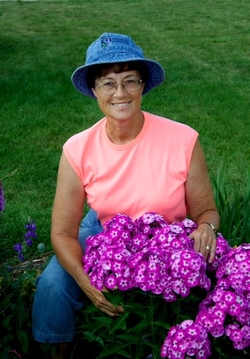 Do you have a love-hate relationship with your garden phlox?

The large clusters of long-blooming flowers are sweetly scented and oh-so beautiful. Their nectar attracts butterflies, bees and hummingbirds.

The downside is that once the heat and high humidity of summer rolls in, white spots can appear on the stems, leaves and flowers.  This is the fungal disease, powdery mildew. In years when it is severe the leaves will wilt and fall off. It doesn’t usually kill, but repeated infections will weaken your plants.

If the phlox in your garden are prone to mildew there are several things you can do. Give your plants plenty of sun, more space, or thin out a fourth of the stems for better air circulation. Remove stems when you notice disease. Water them at ground level instead of overhead. 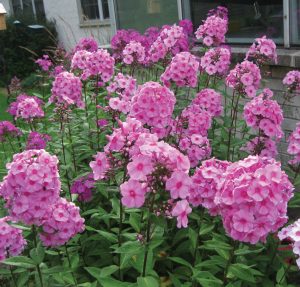 When you clean up the garden in the fall, remove the stems and fallen leaves so the spores don’t overwinter.

Research at Cornell University found that a mixture of one tablespoon of baking soda and one teaspoon of insecticidal soap in a gallon of water applied weekly helps to control it.

The best alternative is to remove a highly vulnerable phlox and replace it with a cultivar that is disease resistant to this area.

The Chicago Botanic Garden’s Richard Hawke has been evaluating phlox for many years. He looks for plants with the best resistance to powdery mildew, so gardeners don’t need to use fungicides. In his trials, plants must stand up to all kinds of Chicago area weather and look good with a minimum of maintenance. They are mulched, but never fertilized or chemically treated. The plants he grows are commercially available.

His most outstanding overall 5-star performer was phlox paniculata ‘Shortwood’, a 50 inch tall plant named by someone with a sense of humor. It’s an old-fashioned rosy-pink (mid-July to early Oct), an offspring of ‘David’ another long-standing mildew-resistant phlox. Right behind it ranked ‘Frosted Elegance’, growing up to 40 inches high with pale pink flowers and darker eye (mid-July to early Oct).

Others that rated 4 stars with excellent mildew resistance were: ‘Bartwelve’, 27 inch salmon pink with darker eye (late-June to early Sept), and ‘Lichtspel’, 57 inch pink with red eye (mid-July to early Oct). These might have to be mail-ordered.

When grown in a sheltered location the tall phlox can flop over when their big flower heads are heavy with rain.  Stake them early in the season.

Oklahoma State University named the Volcano series as Perennial for 2015. The gorgeous colors range from red, pink, ruby, white, lavender and purple with eyes of pink, red or white. This series was bred for disease-tolerance. Cut back the plants by one third after the first bloom to encourage them to rebloom two to three times. They grow between 24 and 28 inches tall.

Phlox are easy to grow. Give them full sun to light shade, and moist, well-drained soil. Fertilize in early spring. Deadheading will promote more flowers and prevent seedlings. There is no hurry to divide them if they produce a good show of flowers.  With careful planning it’s possible to have a selection of phlox in bloom throughout the season.

See you in the stampede at the nurseries.

Got a Gardening Question?

Submit your questions to: connections@dekalbfarmbureu.org. We will share questions with University of Illinois Extension DeKalb County Master Gardeners and publish their answers in upcoming issues of CONNECTIONS.