It’s that time of year when farmers are harvesting wheat and baling wheat straw. Farmers harvest about 4,000 acres of winter wheat in DeKalb County.

Locally, wheat is harvested in early to mid-July, depending on the weather and how quickly the crop matures.

This year’s wheat crop endured the second-coldest April followed by the warmest May and above average rainfall in June. 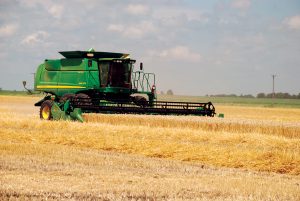 Wheat is harvested in early to mid-July in DeKalb County. Farmers use a combine to harvest their wheat. The same combine harvests corn and soybeans. Farmers change the head of the combine for the different crops.

Wes Anderson, Waterman farmer, expects an average wheat crop this year, anticipating yields around 80 bushels per acre. “The crop is shorter than normal and the heads are not as big as usual. But it is standing good,” said Wes.

The Andersons raise 200 acres of winter wheat in fields located in Waterman and Shabbona. They plant wheat in the fall after the soybean crop has been harvested.

“We grow wheat as a cover crop and rotational crop (with corn and soybeans),” explained Wes. Once the wheat has been harvested we use the land for applications of hog manure.” They sell both the wheat and straw right out of the field.

Dale Sanderson, Sycamore farmer, indicated his winter wheat also is shorter this year based on a cold April. “We have a good stand, but have had too much rain in June,” said Dale. “We’re hoping for average yields, but we’re likely going to be docked at the elevator on our test weights.”

The Sandersons will harvest their 200 acres of wheat in mid-July and sell it at the local elevator. They leave the tall wheat stubble with its red clover mix and then bale it in the fall. The red clover and wheat mix bales are fed to their cow-calf herd.

Why is it called winter wheat?

Soft red winter wheat is grown locally and throughout Illinois. Once farmers have harvested their corn or soybean crops in the fall they plant winter wheat, usually in October. Wheat is seeded, or planted with a grain drill.

After the initial fall growth, wheat is dormant throughout the winter. In a normal year, growth resumes in late winter and early spring. 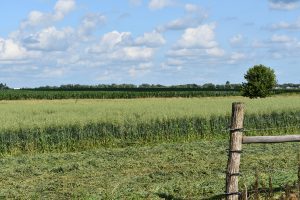 Winter wheat was still green in some fields in DeKalb County last month. Livestock farmers chopped the wheat, called wheatlage, and fed it to beef cattle.

Wheat begins to head about mid-May. Contingent on the year and weather, harvest occurs between early to mid-July in DeKalb County wheat fields.

Farmers grow wheat for various reasons. It spreads out the risk having different crops. Labor and machinery needs are spread out. It provides income in July to pay spring bills.

Wheat serves as ground cover over the winter and lessens chances of soil erosion. 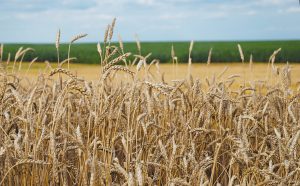 Farmers grow wheat as a cover crop to conserve the soil and also as a grain crop as part of their rotation with corn and soybeans which reduces pest problems.

Winter wheat also provides straw as a by-product used for livestock. Some livestock eat the straw as roughage in their diets. Straw is also used as bedding for livestock.

Livestock farmers choose to grow wheat so once the wheat has been harvested they have available land to apply manure.

What is winter wheat used for?

Winter wheat, when harvested, is used in its entirety. The wheat head is used primarily for foods. The rest of the wheat plant is used for straw by livestock. 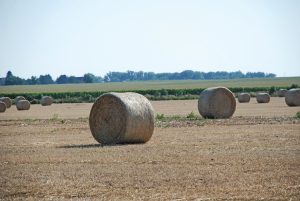 Wheat is baled into straw and used by livestock for roughage and bedding. It also is processed and used in foods such as cereals, cakes, cookies, crackers, flour, and wheat germ.

DeKalb County wheat is processed and used in an assortment of foods. Winter wheat grown locally does not have the level of protein and gluten required for yeast breads. Some of the food uses are: flat breads, cereals, cakes, cookies, pretzels, pastries, pancakes, crackers, part of all-purpose flour, and wheat germ. Other uses include pet foods and glues.

USDA estimates Illinois farmers will harvest 510,000 acres of wheat this year, up nine percent from last year. Statewide, yields are estimated to average 75 bushels per acre, which would be the second highest yield on record.