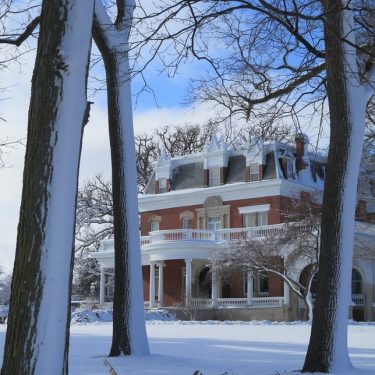 The Ellwood House is all decked out for the holidays.

Revered as one of DeKalb County’s most elegant mansions, Ellwood House continues its holiday traditions with its festive décor. For more than a half-century the three-story mansion has been adorned with Christmas trees, ornaments, lights, garland and other trimmings in each of the stately rooms.

The community has embraced this holiday tradition with over 100 people volunteering to decorate the DeKalb mansion, which was once home to the famed Ellwood family who made their fortune with barbed wire.

“It’s a nice partnership with community members and organizations,” said Brian Reis, executive director of the Ellwood House Museum. Each group chooses one room to stylishly decorate among the 20-some rooms. 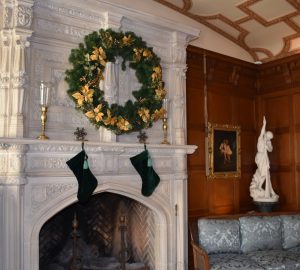 From the main floor’s formal living room to the basement’s rudimentary kitchen, each room is unique and distinctive with its decorations. Volunteers, like Pam Holt of DeKalb, take pride in making the rooms look special.

“Years ago I toured the house during the holidays and it felt so magical,” said Holt. “I thought to myself that I would like to help when I had some time. Well, as it turns out she had some time to volunteer.

For the last four years Holt has been assisting with the décor. She helped decorate six trees this year and several rooms of the mansion. “It still is so magical and just amazing when it’s decorated,” she said. “I’m glad to do it, for the community.”

Most of the Ellwood House rooms have an artificial Christmas tree as well as other adornments incorporating this year’s green and gold color theme. The three-story spiral staircase is beautifully lined with green garland. Holiday enhancements are carefully made to the antique furniture and woodwork and sparkling crystal chandeliers.

“It takes a couple of weeks to decorate the mansion and be ready for holiday tours,” noted Scott Tews, assistant director of the house and museum. “It’s worth the effort and enriches the original furnishings of the house and offers a strong sense of history.” 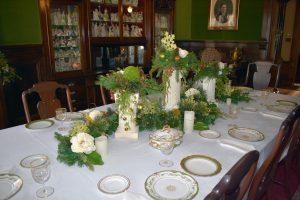 Compare today’s festive holiday-decked out house to the mansion built in 1879 and you would find that the embellishments were pretty sparse then, explained Reis. Candles and lanterns would have lit the interior of the home before the house had electricity. 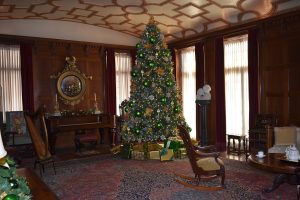 In later years, with the second generation of Ellwoods, the house had a 12-foot live evergreen tree prominently placed in their living room. And their dining room table was nicely garnished for the holiday season, stated Reis.

Other Ellwood family traditions included mailing Christmas postcards to friends and relatives – some of them are on display in the living room.

One of the favorite stories shared occurred on Christmas Day in 1899. At the family’s Christmas breakfast, Isaac Ellwood gave each of his five adult children a check for $100,000. That amount would be equivalent to $3 million today, based on inflation. That story appeared in the local newspaper and in the Chicago Tribune. 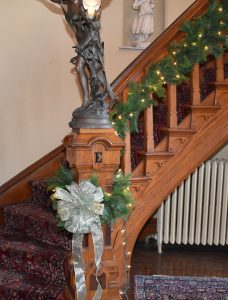 Today, the Ellwood House takes on the arduous decorating task for the benefit of the community’s enjoyment. Nearly 1,000 people visit the mansion during the holiday tours. While people enjoy the beauty of the home, tour guides share family history. In the nearby Visitor Center, guests enjoy visits with Santa and more Ellwood and barbed wire history.

“The holiday tradition brings people together to celebrate the season and mansion,” said Reis. He enjoys welcoming back some of the same people who make it their tradition to return and enjoy the ornate manor. 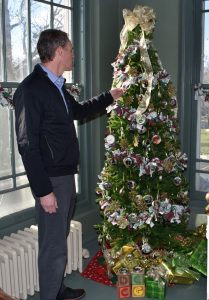 The holiday tours ended earlier this month but the museum staff is already looking ahead to next year with a new color theme and continued traditions. 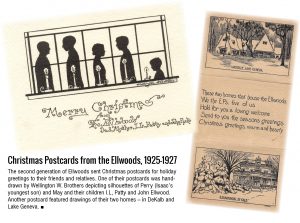 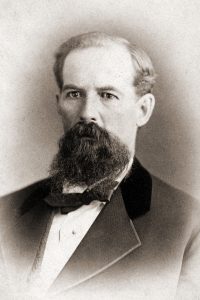 Isaac L. Ellwood came to DeKalb County in 1855 where he found work on a large farm of William Miller near Kingston. Isaac married the farmer’s daughter, Harriett, in 1859 and soon established a hardware store on Main Street in DeKalb.

Keenly aware of the needs of farmers for a durable fence to keep livestock contained, he began to tinker with ways to improve fencing. He invented a barb wire prototype in 1874 but abandoned it for DeKalb farmer Joseph Glidden’s better idea. He purchased one-half interest in Glidden’s barbed wire patent for $265. Together, the two formed a partnership and established the first barb wire factory, the Barb Fence Company.

By 1879, fifty million pounds of barbed wire were being produced annually and Ellwood was well on his way to becoming one of the wealthiest men in Illinois.

Barb wire was made in DeKalb until 1938 when production was moved to more metropolitan areas of Waukegan and Joliet. Eventually, Ellwood established the American Steel & Wire Co., which became a subsidiary of U.S. Steel Corporation.

Ellwood also had interest in ranching and farmland. In the early 1900s his Texas land holdings amounted to 395,000 acres. He also donated some of his DeKalb land for the startup of the Northern Illinois Normal School, now known as NIU.

Isaac and his wife Harriett had seven children. Their wealth enabled them to build a Victorian home for their family in 1879. The mansion was home to three generations of the Ellwood family until 1965. In 1965, the mansion was given to the DeKalb Park District by May Ellwood and her three children.