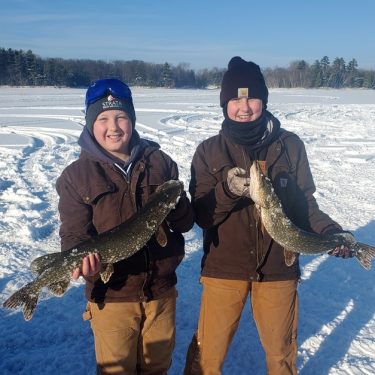 Answer: It gave us time to help Dad farm, work with our livestock, and fish! But we missed sports, large family gatherings and all the other “normal” things.

It was Friday, March 13, 2020 when we got home from school as usual. We checked in with Dad and asked him to play baseball with us. We were outside playing baseball when at four o’clock we heard school was cancelled for the next week.

We were at home for school the rest of the Spring 2020 year due to the rise of COVID-19 cases every day.

Our mom was our new teacher during e-learning. Mom is a teacher so she was good at helping us with our schoolwork. When we had little schoolwork we finished early and it allowed us to go outside and pick up rocks or do tillage in Dad’s fields, but some days the homework was hard and long.

With no scheduled sports we also had more time to go fishing and we took our fishing boat to lakes in Illinois and Wisconsin.

In the summer our mood was a little bit better because our pool was open and we were able to work with our 4-H animals.

We had high hopes to have an in-person 4-H animal show in August. We hoped to have baseball later in the summer and football in the fall. There was also still hope that there would be an MLB season.

Then we learned that the 4-H fair would be virtual. Mom and Dad took videos of us showing our pigs and cattle and our livestock were judged by these videos. The virtual fair was at least something and we were thankful that we could have it but it did not seem as rewarding as having an in-person show.

As fall started our football season was cancelled, but in spite of that, we had a fall baseball season. It felt good to hear the sounds of the bat cracking and the noise of leather hammered by the ball.

At school, because our school is small enough, we could go back in person. We had to wear masks. That took a while to get used to, but we did.

As the new 4-H year started our club had online meetings. It was harder to communicate, vote, and learn during a virtual meeting rather than an in-person one.

With school and baseball underway it was time to bring out the combine as the corn and soybeans were ready for harvest. When Dad needed someone to drive the grain cart we would head out to the field to help him.

There was work to be done during harvest with the grain setup. We would sweep the bins so that he could load out and we would also run the vertical-till disk after the corn was harvested.

As the days turned longer and the air turned cooler, we learned that the chances of having basketball decreased by the day. Even though there would most likely not be a basketball season, we continued to play and practice basketball in the shop. Illini basketball was a good motivator.

As the Christmas season flew by and winter break had only a week remaining, our family set out to northern Wisconsin to go ice fishing for some northern pike. We both love to fish! This new spring will hopefully be the end of COVID-19 as the vaccine starts to be available to the public. The quarantine gave us more time together as a family and time to farm with our dad.   However, hopefully moving forward there will be sports, our big family gatherings, 4-H fairs, and all normal non-COVID things.

The Schweitzer boys – Warren and Elijah – help their father farm and raise livestock for 4-H projects. Their parents are Mike and Amy Schweitzer of rural Malta.