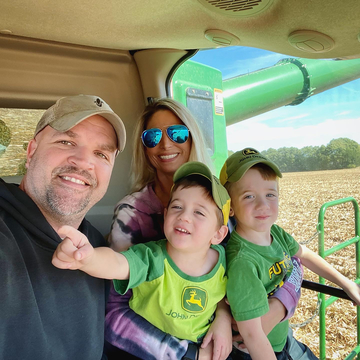 Answer: We constantly do health checks of our calves and make sure they have adequate feed and nutrition. We wean them at six months of age to allow the mother cows time to regain energy for their next calf.

Every year we breed our mama cows in the summertime in order to have calves the following spring. We do our best to calculate each cow’s due date with our vet in the fall and about two weeks before the first cow is due we are on watch checking for signs of labor and to assist in getting the calf out if necessary.

Once the calf is born we give it vaccines and vitamins and then dip its umbilical cord in iodine to prevent infection. We also make sure the calf is up and nursing from its mother getting that first milk, called colostrum, which is crucial to getting them off to a great start in life giving them the antibodies they will need to fight off illnesses.

When they are drinking milk, we name them, give them an ear tag with their name on the front and birth date on the back. We will then photograph them and share on our Facebook farm page (C & B Farms) along with their birth story.

Each year we choose a name theme for the bull calves, this year’s theme being country singers. The female calves, called heifers, have a naming system as well where the first letter of their name is determined by a letter we have chosen for their breed, for instance all the Black Angus female names start with the letter M.

From there we monitor them, but let their mothers take care of them for the next six months. The calves enjoy playing with each other in the wide open pasture space during the day and sleeping next to their mothers at night. They drink their mother’s milk, start munching on some hay, and at about 3-4 months of age we start feeding them creep feed as well. Creep feed is a mixture of corn, oats, alfalfa, brewers grain, barley, soybean meal, molasses, and minerals. Creep feed helps them transition to eating all on their own after weaning and also helps them to gain more weight.

At about 6 months of age they are weaned from their mothers, as their mothers need to use their energy to create the next calf after being bred vs. using their energy for milk production for the current calf. We do a fence-line weaning method which is separating the cow and calf while still allowing them to see each other through the fence. They will often lie next to each other on opposite sides of the fence. It is supposed to be a less stressful method on the cows and calves during that transition.

After weaning, they will begin to eat a mixture of silage and hay to grow big enough to transfer to the feedlot for beef production at about 750 lbs. or roughly 11 months of age. Some of the heifers will be held back to join the cow-calf herd as future mothers. And the entire cycle begins again!

One of the fun things we do each year in the fall is have our annual “Farm Fan Favorite” Contest where the fans that follow our Facebook Farm Page (C & B Farms) get to vote for their favorite calf of the year by “liking” their favorite calf’s picture. The calf with the most “likes” at the end of the contest is crowned the “Farm Fan Favorite” Winner. We would like you to join in the fun this year and have extended the contest for DeKalb County Farm Bureau members to vote as well! Help us crown this year’s winner by voting and emailing the name of your favorite calf to connections@dekalbfarmbureau.org by Nov. 30. (See pictures of the calves on pages 13-14). The winning calf will be featured in the December magazine.