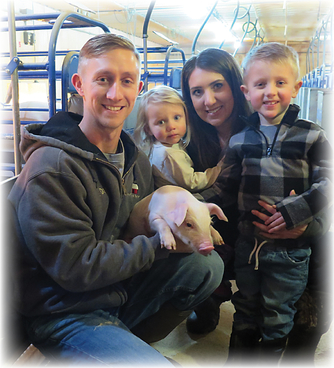 Answer: It has affected every business in one way or another – meat producers are no exception. For several months, meat producers across the country have been struggling with a break in the supply chain between the farm and the packing plants.

In April, many meat packing facilities faced shutdowns due to outbreaks of COVID-19 among employees. These packing plants were closed for an average of two weeks in order to quarantine workers, clean, and decontaminate.

Pork production operates much like a constantly turning wheel. Pigs enter facilities as small weanlings, grow for six months, and then are marketed. A week or less after the last market-sized pig leaves, the building is filled again with small, newly weaned pigs; like a wheel, always turning to keep production optimal.

When the meat packing facilities shut down, pork producers could not empty their barns full of market-sized animals to open up space for the small pigs that had just been weaned. The production of these small pigs began four months prior to COVID-19 shut downs.

The gestation of a pig is 3 months, 3 weeks, and 3 days. Pigs that were conceived months ago were still being born with no barn to grow in after being weaned.

Our farm has been fortunate in this time to have some extra space and, although loads of market pigs have been delayed, we have still been able to ship pigs out in time to make room for the weanlings.

Other farms, especially in Iowa and Minnesota, are facing a bottleneck disaster scenario that could not have been predicted. Some producers are able to sell small pigs to other farmers who have space. Some barns are being overcrowded to try to make enough room.

As a very last resort, small pigs have had to be euthanized because there is literally nowhere to put them. Experts expect several million pigs could be euthanized in 2020 to re-balance the animal supply with meat packing capacity. This is a heartbreaking scenario for producers. Animal welfare is always a top priority.

Meanwhile, market prices have plummeted and pork farms are selling pigs at below breakeven prices. The shortage of meat, based on the disruption in the food supply chain, has prompted higher prices at the grocery store.

Pork farms have had a tough few months and it will take the industry several more months to work through the disruption in meat production.