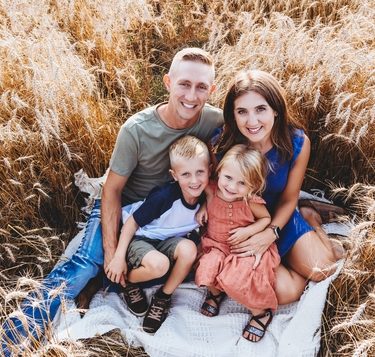 My family shipped cattle to the Stockyards for several years. Now they sell directly to the packing companies and some directly to consumers.

Livestock production runs deep in the history of my Dermody family. My fondest childhood memories involve our farm and ranch operation in Iowa. My dad and brother currently work together as the 4th and 5th generation of cattle producers on the homestead in Parnell, Iowa. My grandfather, who just celebrated his 95th birthday, also lives on the farm.

The three men share a last name, a striking physical resemblance and a love of the livestock industry; however, the way cattle have been marketed has changed significantly.

My grandfather shared his memories of the Chicago Stockyards from when he started shipping animals there in the 1950s until the yards closed in 1971. Prior to that, my great-grandfather shipped his fat cattle to the big city!

In the 1920s and 1930s, Arthur Dermody Senior would deliver his cattle to a small yard in Parnell, Iowa, about three miles away from the farm. Here, the animals would be loaded on trains and shipped to Chicago.

In the 1950s, Arthur Dermody Junior began marketing his own livestock in Chicago. By this time, the method of livestock transportation had shifted from railway to highway. Grandpa would hire truck transportation for the cattle from Parnell, Iowa to Chicago, Illinois. Once at the Stockyards, a specified commission firm would take possession of the cattle.

Grandpa preferred to accompany his livestock all the way to Chicago, if he were going alone, he would ride along with the trucker. Occasionally Grandma or some of their children would accompany them and they would drive in the family car.

Local representatives of the commission firms would build relationships with producers to “sell” their commission service at the stockyards. These people were professional cattle sellers, advisors, and friends of the livestock producers. It was their job to know the market and negotiate with buyers to get the highest possible live weight price for the producer. The buyers typically worked for a packing company and their job was to purchase animals for the lowest price.

The market opened at 8 am, at this time the buyers would begin looking at livestock and placing bids with the commission firms. The higher quality, higher grading animals would receive higher bids. Grandpa recalls that the bidding process with cattle could become a very heated engagement – the two parties had opposing goals. There was typically a lot of yelling, and he remembers thinking a fist fight would break out on more than one occasion at the Stockyards. Bidding would conclude around 10 a.m. and then the animals would be sent to the scales. From the scales, the animals were moved to another area and then loaded on train cars to be transported to the East Coast. There were also a few packing plants directly across the street from the Stockyards that would receive livestock.

A carrier would deliver a scale ticket to the Exchange Building – this is where the producers would be paid, if they were present, or payment would be mailed. If the producer was present to collect their payment, oftentime it was in cash.

My dad and brother have a much different experience marketing fat cattle today. They choose to sell directly to the packing companies. Local packing plants are plentiful, this was not the case in the time of the Chicago Stockyards. Today, all the family’s animals are sent to packers within 2.5 hours of home. This keeps transportation costs from consuming profits.

When cattle are ready for market, at 14-15 months of age, they contact the packers saying that they have cattle for sale. During negotiations, the packer and producer agree on a base price for hanging weight – premiums and/or docks will then be applied after the meat has been graded. This is called “selling on the grid.” This is different from selling cattle at a live weight price at the Stockyards. A buyer purchasing animals by live weight needed to grade the animals just by looking at them. In cattle, the grades are select, choice, and prime, with prime being the most desirable grade.

Delivery typically occurs 1-3 weeks after the sale takes place. Transportation costs are also part of the negotiations when my dad and brother sell fat cattle – in some instances the packer will be responsible for the shipping costs, other times my dad will deliver to the packer with his own truck and trailer and incur the cost himself.

Buyers frequently purchase livestock sight un-seen. After years of working with the same packers, the buyers do not visit the feedlots as frequently. This is also a product of selling/buying “on the grid” with a base price and premiums. In the Chicago Stockyards, buyers walked though lots of livestock and placed bids based on the quality of animals they were seeing.

In addition to selling directly to packers, my family sells a portion of their fat cattle directly to the consumer. My dad and brother have a relationship with several local butchers. The sale is made between the producer and the consumer for a portion of a beef. A “locker date” is made to have the animal butchered. The consumer then pays the butcher for their processing services and the producer for the pounds of meat.

The Chicago Stockyards were part of the lives of so many farm families. My grandfather-in-law Gerald Hartmann recalls selling fat cattle at the Stockyards for the first time in 1962. He remembers listening to WGN’s reports to decide if it was a good day to ship cattle to Chicago. If it was busy, he would wait until the next day to send the load. Mondays and Wednesdays were typically the busiest days. He also liked to accompany his livestock to Chicago and would ride with the trucker to meet up with commission firm representatives or would drive the family car.

Livestock production was an integral part of our families. As the nature of agriculture continues to evolve, we hope to be able to continue to raise our children with livestock on the farm and all of the irreplaceable experiences it provides.

Ashley and her husband, Dan, reside in rural Sycamore with their two young children.