But the armistice wasn’t the only highlight for the more than 1,820 members, staff and affiliates who attended the meeting.

In addition to the opportunity to listen to keynote speaker Captain Mark Kelly, members also enjoyed a visit from U.S. Department of Agriculture Secretary Sonny Perdue and set policy for the coming year.

Voting delegates for the meeting, totaling 343, also debated and decided on policy for the coming year. While a full range of topics were discussed, issues including the motor fuel tax, recreational marijuana and school security occupied the majority of delegates’ time. 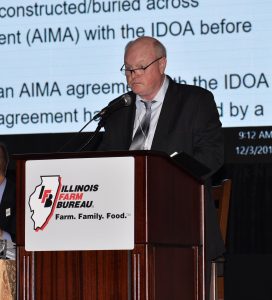 Mark Gebhards, executive director, IFB Governmental Affairs and Commodities, summarized the recreational marijuana discussion noting that the organization adopted a policy in opposition to legalizing recreational cannabis. He said, “In the event that it is legalized as we move forward with this next legislative session, then the delegate body wants to make sure that it is regulated and taxed accordingly.”

Delegates also discussed policy which provided support for the medicinal marijuana industry, which is currently being reviewed in a pilot program in Illinois.

“Another issue as our state continues to try to get a handle on its fiscal situation is the motor fuel tax,” Gebhards said. “Our motor fuel tax here in Illinois hasn’t been updated in about 28 years. Our policy, before the delegates amended it, was that we would not exceed a 10-cent increase in motor fuel tax. Delegates changed the policy to allow the organization to support a ‘moderate’ increase in the motor fuel tax, giving us some leeway to work with the new administration as they look at amending this tax.”

Delegates also spent time discussing school safety and security, an issue which may not traditionally be considered a Farm Bureau topic.  Delegates crafted policy to underscore the importance of school security.

The USDA secretary is cautiously optimistic that trade relations with China are moving in the right direction.

Fresh off a recent announcement that the U.S. is making progress on trade negotiations at the G20 Summit, USDA Secretary Sonny Perdue told Illinois farmers on Dec. 3 that the news sounds very promising, “but it’s never over until it’s over.”

Speaking to delegates at Illinois Farm Bureau’s Annual Meeting in Chicago, Perdue also provided updates on the farm bill and the recent signing of the United States-Mexico-Canada Agreement (USMCA).

The U.S. has reportedly agreed to temporarily hold off on raising tariffs on imports from China, while China agreed to immediately lift trade barriers on U.S. agricultural products and other goods. 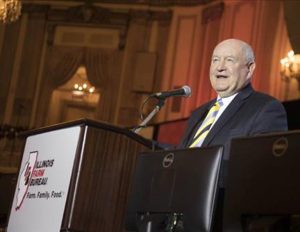 Perdue said, “I’m excited about the possibility of China buying our stuff again, instead of stealing our stuff. That’s really what it’s all about,” Perdue said to applause from delegates, referring to theft of U.S. intellectual property by the Chinese.

And, leadership in the Congress-ional agriculture committees announced they reached an agreement in principle on a new farm bill. “I think we’re going to get one (a new farm bill),” Perdue said. “We believe that things are going to be relatively good.” We didn’t get everything we’d like in there, but frankly, that doesn’t deal as much with production agriculture.” The core of the crop insurance program remains.

Christian Thurwanger of Sycamore advanced through two preliminary rounds to participate in the Sweet 16 of the statewide Discussion Meet at the Annual Meeting. 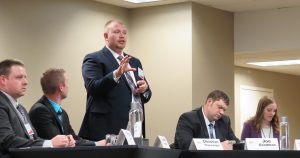 Christian Thurwanger delivered his opening statement at the Young Leader Discussion Meet in Chicago, Dec. 1. He advanced to the Sweet 16 of the State Discussion Meet.

This was Christian’s first year participating in the competition as a Young Leader. Justin Bolander and Justin Clausen with the DeKalb County Young Leaders also attended the meeting in Chicago. 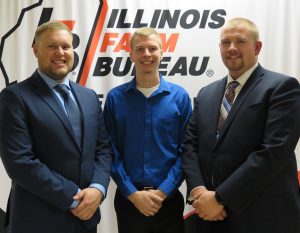