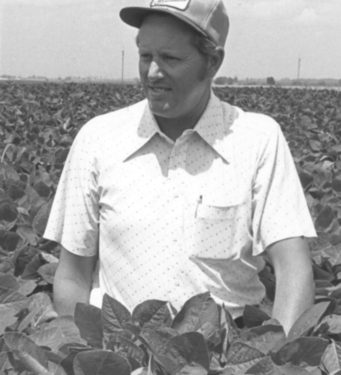 Farm Bureau lost a dear family member and respected leader with the passing of Allan Aves.

Allan was a lifelong member of Farm Bureau and served for 18 years on the Board of Directors, of which nine years he led the organization as president, from 1977 to 1986. Allan was DeKalb County Farm Bureau’s 11th president.

During his presidency and a good share of his farming career, Allan was active in political circles as a prominent agricultural leader.

“His energy and passion for agriculture was clearly evident,” said Doug Dashner, who served as manager of the county Farm Bureau the last seven years of Allan’s presidency. “We must remember that during his tenure as president in the early ‘80s agriculture was suffering critical pressures not unlike today.”

“Allan tirelessly ‘beat the drum’ for agriculture in whatever setting he encountered locally, statewide, nationally or internationally,” said Doug. Beyond the county, Allan served as president of the American Soybean Association and was District 1 Director for the Illinois Farm Bureau. Among his many distinctions, he was named Master Farmer in 1983 and received Illinois Farm Bureau’s Distinguished Service Award in 1998.

During his Farm Bureau presidency he championed the expansion of staff for members’ benefit with the creation of a Local Governmental Affairs Director, a Farm Business Consultant and a Director of Information.

Allan and his wife Ruth farmed with sons Barry and Kevin in rural Kirkland. They survive him along with daughters Lynn of Colorado and Diane of Minnesota and their families. Allan died April 13 at the age of 89. Farm Bureau extends its deepest condolences to the Aves family.