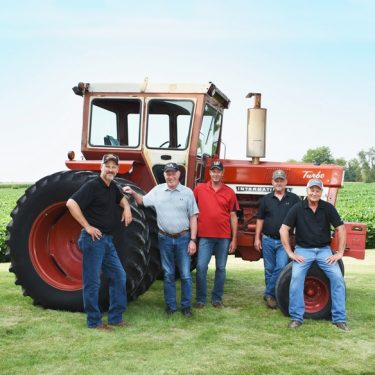 Over half of the farmers today have a primary occupation other than farming.

The U.S. Census of Agriculture shows 52% of American farmers have full-time jobs and farm part-time. Part-time farming means putting in long hours of farm labor around 9-to-5 jobs.

The Diehl Brothers, whose farm is based in rural Maple Park, have gotten this routine down pat. They work all day at their full-time jobs and then farm at night and on weekends.

“It’s in our blood,” said Dave Diehl, “and it’s something we enjoy doing on the weekends.”

“We try not to take days off work but work after hours on the farm,” added Chuck.

The brothers formed a farm partnership in 1990, when their father, David, retired. The five are equal partners in their family farm and all share in varied tasks.

Rich, the oldest brother, worked at the DeKalb County Landfill/Waste Management for 42 years as an equipment operator. Now 65, he is retired and has more flexibility to farm. Rich of Sycamore focuses on the farm’s tillage. The brothers also count on him to move equipment from field to field.

Ron, 63, has worked at Vermeer in Aurora as a road technician for 32 years. Ron of Maple Park is the farm’s mechanic – he regularly works on their farm equipment in their machine shop. He also runs the planter and combine.

Dave, 62, has worked full-time for Larson Farms for 43 years in their beef cattle operation. His full-time job is only a few miles south of the Diehl Farm so it’s convenient for after-hours work. Dave of Sycamore operates tillage equipment for their farm in the spring and fall.

John, 53, of rural Shabbona has been employed at Larson Farms for 34 years working with all aspects of grain production. On the Diehl Farm, he drives the semi-truck hauling grain in the fall and helping where needed.

Chuck, the youngest brother, is an operations manager at Odin Fabrication in Elburn. He has worked there for 28 years. The 50-year-old manages the Diehl Farm and maintains records. Chuck of Kingston alternates with his brother, Ron, operating the planter and combine.

Assisting the brothers at the farm are the next generation of Diehls. Adam (Dave’s son) works there on a regular basis and takes charge of spraying their crops. He helps his dad and uncles after his full time job of working for the City of Sycamore. Ryan and Kurt (Rich’s sons) also help on the family farm when time permits. Ryan is employed at 3M in DeKalb, and Kurt works for Waste Management.

The younger Diehls are more “tech saavy” say their fathers and uncles and encourage technology upgrades to their Case IH equipment.

So what does it take for five brothers to farm together? “Respect and patience,” responds Rich. “The key is that we are all on the same page and everyone brings something to the table.”

What helps keep them connected are their monthly meetings at the farm shop. They meet the first Tuesday of each month at 5:15 p.m. They have a written agenda to stay on task with their farm discussions.

“We try not to make it too long of a meeting so we can still spend time with our families,” noted Ron.

The Diehl Brothers discuss everything farm-related: marketing their corn and soybeans, finances, equipment, and strategies for planting and harvesting their crops.

They farm 750 acres of mostly family-owned farmland throughout DeKalb County.

Because their farmland is spread out, moving equipment between farms takes time and requires them to be extra safe in high traffic areas. Farm safety is another topic which they discuss at their monthly meetings.

The farming brothers also talk about growing the farm business, as the younger Diehls share an interest in farming. “We would like to add more acres for the next generation,” said Chuck. “But its not always easy to pick up more farm ground.” Yet they are hopeful that they will keep the farm going with the sixth generation of Diehls.

Diehl Family Moved West to DeKalb County in the 1960s

In 1854 Adam Diehl immigrated from Europe to Naperville, Illinois. His son, George, milked cows and their farm was one of the milk stops along the rail lines. Their farm was located on their namesake road – Diehl Road, north of Naperville (near I-88).

George’s son, Edward, farmed in the West Chicago area, near DuPage airport. As the Diehl farms were sold and developed, their family moved further west. Edward’s son, David, bought a farm in Maple Park. He bought the main farm of 120 acres on County Line Road in 1961.

“Other family members claimed the farm was too far west,” recalled Rich. “Most of the family relocated to Kane County, near Elburn.”

On the DeKalb County side of Maple Park, David and his wife, Joyce, raised corn, soybeans, cattle, hogs, chickens…. and their seven children.

Sue, is the eldest of the Diehl siblings. And another brother, Dan, falls in the middle of the bunch. David passed away in 2012 and Joyce in 1995.

The Diehl Brothers have kept some of their father’s vintage tractors and a truck for sentimental reasons and some farm use – the Farmall M, and International Harvester 400, 756 and 1466 tractors, plus the 1977 Chevy truck “Old Blue” (which the brothers drive to check fields – just like their dad did).

“Dad had all red, except for a John Deere lawn mower,” said Chuck. “We have continued the red tradition with our Magnum tractors.” Their newest is a 290 Magnum purchased in 2012.

Family is important to the Diehls… all 70 of them when you get the entire Diehl family together for Christmas, their summer picnic, weddings and some birthdays.

“Sometimes it’s hard to balance family and farming at times,” said John. “There are tradeoffs, when we miss family activities.” He missed his daughter’s prom this spring because of planting. “As I get older I wish that I had taken time to enjoy those special moments.”

But the brothers all say they wouldn’t trade it for anything else. Farming is what they like to do when they aren’t working 9-to-5.