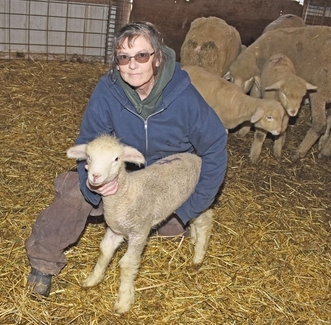 With the spring season comes lambing season. Local farms are welcoming new lambs to their flocks.

Larger sheep producers spread out lambing over as many months as they can to appeal to lamb customers throughout the year, stated Barr.

Barr’s flock of Columbia ewes is scheduled to have most of their newborn lambs in the fall. She plans it that way based on seeking to “maximize profits” with “better weather” in the fall than the winter-spring months.

In prior years the DeKalb sheep producer would breed purebred ewes to lamb in the spring and fall in order to have different ages of lambs to sell for shows. Now she sells most of her lambs for market and a few for breeding.

Barr has nearly 50 years of experience raising sheep. Originally from Mooresville, Indiana, she was first introduced to sheep as a youngster when her father bought two bottle lambs which she raised as 4-H projects and showed them at the county fair.

From then on she built her flock to as many as 100 sheep and was part of the show circuit going to county, state and national sheep shows.

She showed her registered Columbia sheep all over the country with top placings being reserve champion lamb at the Indiana State Fair and reserve champion ram at the North American Livestock Expo in Louisville, Kentucky. Year after year she placed in the top 10 at Louisville with her sheep and at the Columbia show in Sedalia, Missouri.

Once she was done showing she turned her focus to helping local youth with show lambs. She raised and sold sheep to young 4-H members and mentored them. At the same time, Barr was sheep superintendent of the DeKalb County 4-H for many years. “It was gratifying to pay it forward with kids,” said Barr. “Giving back is a good thing to do.”

In an analysis of the last 50 years, Julie Barr says sheep have gotten bigger for the shows meaning their animal structure is larger.

But what wins in the show ring isn’t necessarily what Barr chases after being in the purebred business. She wants “a sheep that walks freely and has legs set squarely underneath them, has the width, muscle and style in its frame and has good mothering/lambing abilities.”

Shepherding her flock of about 40 ewes and rams, Barr is one of the longest continuing sheep producers in the county.

Another trend she has observed is that sheep numbers have declined steadily in DeKalb County since she came here in the mid-1980s. She graduated from Purdue with an animal science degree and relocated here to work for DeKalb Swine Breeders.

“There were so many flocks back then and they were a lot larger in size than they are today,” said Barr.

She explains that many of the sheep are now being raised by 4-H and FFA kids for showing. A small number of farms have a few sheep for that very reason.

Her Columbia sheep are a dual purpose breed, raised for both meat and wool. They are larger framed animals with medium wool type fibers. She shears them once a year and sells the fleece to hand spinners and the wool market.

“I’ve always enjoyed raising sheep,” said Barr. “I especially like the breeding and genetic pieces and seeing the end results in lambs.”

“You have to like livestock to be in this business, which requires feeding sheep even in the cold!” she said. Barr feeds her flock before and after her full-time job as plant administrator at the Webster Road branch of Conserv FS.

Animal care is a top priority for this shepherd. She treats her flock with care and provides vaccines when they are born and antibiotics are given only to treat sick sheep. “We take very good care of our livestock because healthy livestock do well. All livestock are here for a purpose and that is to provide breeding stock for other livestock farmers and provide food,” said Barr.