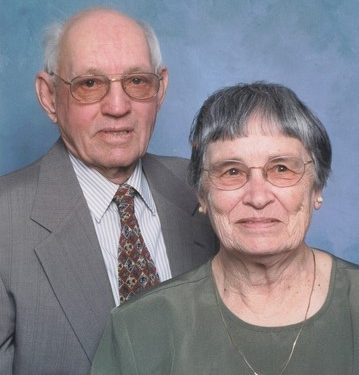 They were that farm couple. Who worked together side-by-side on their family farm. Their entire married life.

Leonard and Vivian Nelson were their own farm team – planting and harvesting their crops and raising livestock – for more than 65 years. Vivian particularly enjoyed the fall harvest as she drove the combine while Leonard hauled grain. They were delighted to give their grandchildren rides in the combine and grain truck during the busy harvest season.

“They were a team,” said Sheilah, the middle daughter. “They supported one another, praised each other, and got through life’s challenges together.”

The Nelsons’ granddaughters described them as “best friends.” “They had a deep respect for each other and profound love,” explained granddaughter Kara Bancks.

The farm couple spent their lifetime farming in rural Malta being good stewards of the land and having a strong work ethic.

Leonard began farming at a young age to help the family when his father became ill. He finished eighth grade and then worked on the family farm. But the lack of a high school education didn’t stop Leonard from being a self-taught mechanic and life-long learner. He could fix almost anything on the farm.

Vivian completed high school in Malta, a farm girl, and descendent of the Willrett family. In her youth she worked at a bakery and the Wurlitzer Corporation.

Vivian and Leonard married on Valentine’s Day in 1947 and celebrated their love for one another every Valentine’s Day thereafter. They spent all of their married life on their home farm which they purchased from Leonard’s parents. There they raised beef cattle, pigs, chickens, corn, soybeans… and three daughters.

The Nelsons’ daughters – Marlene, Sheilah, and Juanita – grew up helping on the farm, like most farm kids did, with assorted chores.

“We helped in the fields when needed and gathered eggs,” recalls Sheilah. “Our parents instilled in us that working on the farm and in the house were equally important.”

The girls acquired their mother’s passion and natural skills for handwork such as baking, gardening, weaving, sewing, crocheting and knitting. They remember how their mother would knit sweaters for all family members, a highlight of their Christmas celebrations.

To those in the community, Vivian was known as the “Rag Rug Lady” based on her many creations from her looms. For years she wove for many local churches as they prepared for their fall bazaars. Weaving became a team effort with Leonard – just like everything else they did. The two also enjoyed traveling, going to auctions, and collecting antiques.

Juanita describes her parents as “humble” and “devoted” to each other. They left a legacy of love for farming and family.

The Nelson family has established an agricultural scholarship fund with the DeKalb County Farm Bureau Foundation to honor Leonard and Vivian who saw the value in education.

“Our parents would be pleased we are investing in the future [with this scholarship],” said Juanita. “They were longtime farmers and Farm Bureau members. And they would be happy that we are helping students who are studying agriculture, planting seeds for the future.”

Thanks to the Nelson family’s generosity, the new Leonard and Vivian Nelson Ag Scholarship will be offered to college students starting in 2022.