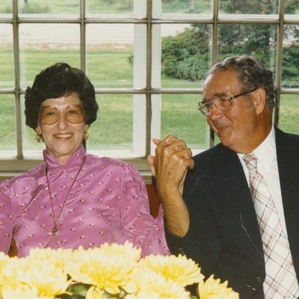 Proud to be Americans

Raymond and Frances Katz dedicated their lives, spirits, and hearts to DeKalb County and to America, continuing the legacy of their parents and grandparents who came to this country as immigrants in the mid-1800’s and early 1900’s.

Raymond attended DeKalb schools and then graduated from the University of Illinois with a bachelor’s degree in commerce. Frances was raised in the St. Louis area and then attended the U of I where she graduated as well. Both of Frances’ parents were university graduates – her father from the U of I School of Agriculture and her mother from Washington University.

Raymond and Frances met during their college years while in Champaign. They married after college and in 1941 moved to DeKalb where they spent nearly 65 years together.

“My parents loved DeKalb County and my Dad thought it was the ‘Garden Spot of America’,” said their son, Richard.

Raymond was a combat veteran who served in the U.S. Army during World War II where he was wounded several times and honored with the Purple Heart medal with Oak Leaf Cluster. His war injuries didn’t stop him from leading a full and active life.

He was president of Fourth Street Motors in DeKalb which his father had previously established. Raymond also had a real affinity for banking having served on the DeKalb Bank Board of Directors and later the First National Bank of Malta which would become Resource Bank.

The Katz’s were community-minded people. Raymond served on the first board of Kishwaukee Hospital and Frances was the first president of the hospital’s auxiliary. They both were actively involved in numerous civic and community groups throughout DeKalb and Sycamore.

Raymond and Frances were proud of their connections to agriculture as DeKalb County landowners and long-time Farm Bureau members. They developed lifelong relationships with local farmers as a result.

To honor their late parents and continue their memory, the Katz Family Foundation has established a new scholarship with the DeKalb County Farm Bureau Foundation. The Raymond & Frances Katz Ag Scholarship is designated for an undergraduate student at the University of Illinois (Raymond & Frances’s alma mater).

“They would be pleased that there is a scholarship in their names,” said Richard. “There is no better way to honor their memories than provide a scholarship reflective of their belief in DeKalb County.”

Besides this legacy of pride, Raymond and Frances’s family legacy endures through their four children, 12 grandchildren and 15 great-grandchildren.