In the early 1900s, Illinoisans were tired of the struggles with muddy roads and looked for a solution to the problem. At the same time, automobiles were becoming the mode of transportation, making the problem much worse.

By 1902, the State of Illinois founded a state highway commission, which required automobiles to register and pay for “identification plates.” The fee for this plate went into a road fund. With the installation of good hard roads, people in rural areas could easily come to the cities and not worry about the mud and muck or not be trapped there if a rainstorm came up. 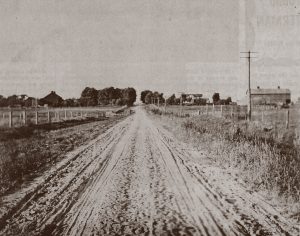 In the early 1900s dirt roads were common. This dirt road is now known as Waterman Road. Concrete was used to pave the road and for years it was referred to as the Narrow Cement Road.

All areas were eager to have these “farm to market” roads. DeKalb was dedicated to “pulling Illinois out of the mud,” a slogan adopted throughout the state. In October of 1913, the Township of Afton was chastised for not fixing the road that led north to DeKalb so some of the DeKalb business and professional men chose to do it for them.

The men organized a “Good Roads Day” as a social event as well as getting the road in. Every able-bodied man was expected to help, especially those who traded goods in the southern part of the county.

Carter gravel pit was opened so that gravel could be hauled to the Afton Road (now Perry Road) which joined Fourth Street out of DeKalb. It was quite a spectacle with men in business suits and ladies in long dresses in a shovel brigade, showing a united front to get the job done. After the gravel was laid, DeKalb Township rollers secured the gravel.

In October of 1915, more improvements came when a proposal was submitted to the DeKalb County Board of Supervisors, whereby citizens of Afton Township would help pay to build a concrete hard road in their township. It would begin at the west end of the Afton Road (Perry Road), and go south to the north line of the Township of Clinton (Waterman Road). The road was to be 17,888 feet long and 10 feet wide. Residents were asked to pledge as much as they could afford to get the hard road built.

The road was completed in 1917, to the joy of all who would travel on it. However, traffic was allowed on the road before the concrete was sufficiently cured, resulting in rutting from buggy traffic, which could be seen well into the mid-1970s. For years this road would be called the “Narrow Cement Road.” 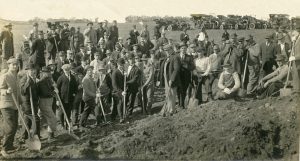 The road building crew in Afton Township, October 21, 1913, worked to create a new concrete hard road in their township.