A fire on January 27, 1902 was one of the worst that DeKalb had experienced.

Early morning fire whistles sounded around 8:45 a.m., alerting firefighters to the location. The South School was on fire!  Located at the corner of Third Street and Prospect, the school, which was built in 1861, contained all grades. 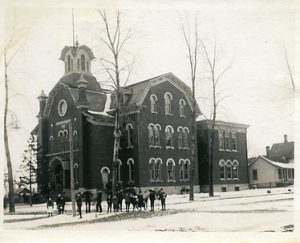 The South School, shown here in 1868, was a three-story stately brick building located on the south side of DeKalb.

This was an exceptionally cold morning in January, so earlier in the day, the janitor stoked the fire in the furnace room to try to keep the old building warm. He then proceeded to check the rest of the building to note the temperature. When he returned to the furnace room, he found the room in flames.  He notified the teachers and then sounded the alarm for the fire department.

Fortunately, most of the students had not arrived at the school yet. When the fire company arrived, the building was already fully engulfed and in two hours the cherished building was a heap of ashes. All the school records, papers, and books were gone.

The home of A. G. Newgren stood just 20 feet south of the school and was in danger of burning. When the firemen had determined the school could not be saved, they turned their attention on saving the home. A corner of the home was wrecked by a falling brick wall of the school building, but the home was saved from the fire. 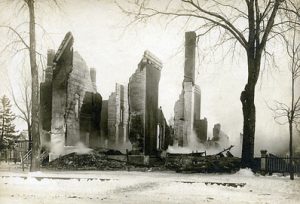 In 1902 the South School was destroyed by fire. Shown are the remains of the school building.

Immediately plans were put in place to accommodate the nearly 400 school children at other locations. The children returned to school the next week, after being relocated to church facilities, East School, and to rooms in the Northern Illinois State Normal School, where Dr. Cook had tendered the use of four rooms at the college. None were sent to the North School because it was already overcrowded.

The high school students remained at their temporary schools until February 12, 1905, when a new school, the DeKalb Township High School, could be occupied.  Grade school children were eventually dispersed to the Normal School, North School and the two new schools, Haish and Glidden. The East School had been retired by this time.