The corner of First Street and Lincoln Highway in DeKalb has always been a prime location.

The southeast corner of the intersection was originally purchased in 1849 by Dr. Basil Ruby, who was “an old-time root and herb doctor.” On that location, Dr. Ruby and Jackson Hiland started a drug store and operated it until 1865, when they closed the business.

Dr. Ruby’s son, Baxter, then bought the location and converted it into their residence. Another building on the property was used for multiple businesses: a photography studio, a dressmaker, and even painters.

In 1917, the Ruby family had sold the property and work started on the new Ellwood Fisk garage on that corner. Fisk Motor Company officially opened for business in August 1918. The garage/dealership remained at that location until 1941. 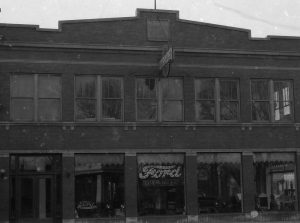 The Ellwood Fisk Garage operated from 1918 to 1941 at the First Street corner.

Then Montgomery Ward, at 116 East Lincoln Highway, expanded its business into the Fisk building. Montgomery Ward remained at that location until 1969, when they moved the business to Sycamore Road. 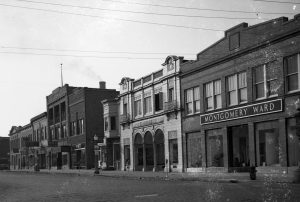 Montgomery Ward occupied two buildings in 1948 (the east side was the old theatre building) at First Street and Lincoln Highway.

In 1973, the building became the SECO building, named for the four businessmen who owned it: George Stratton, John Eggum, Charles Combs, and Warren Osenberg. The popular UpRising Tavern and Four Squire Men’s Clothing store were located there. In addition to these stores, the Subway Gallery was located in the basement.

In 1979 Lan Sirs Clothing Store replaced Four Squire’s. In 1985 Otto’s replaced UpRising, and Lan Sirs was eventually replaced by Ducky’s Formal Wear in 2006. The building was officially shut down in 2014 because of poor conditions and damage from a broken waterpipe.

The building stood empty until 2017 when it was purchased with plans of building an apartment and commercial use complex. The demolition to tear down the structure started in May of 2017, ending the 100-year history of the building. 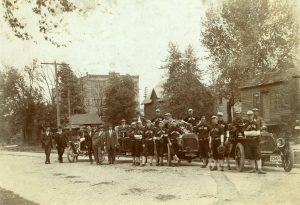