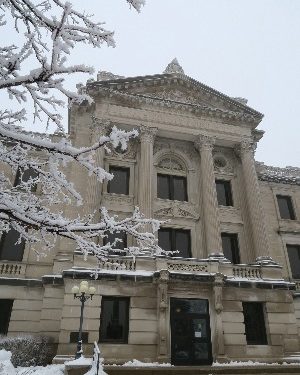 Our local county government started on March 4, 1837 when DeKalb County was organized from Kane County by the Illinois Legislature and by an election of registered voters.

Previously, in 1836 this area was part of Kane County with Geneva as its county seat. It was very difficult for the western settlers to reach Geneva because of the nearly impassable roads and swamp areas. Settlers demanded a review of the county and the decision to spin off another county was made.

Because the county seat had not been established, the first session of court held July 11, 1837 at the home of Rufus Colton. They divided the county into five election precincts/voting districts. They were Kingston, Sycamore, Orange, Somonauk, and Paw Paw.

Sycamore, Coltonville, and Brush Point were front runners to win the prize of county seat knowing that it would greatly increase the value of the land. Sycamore was eventually chosen by vote because the location was on high ground and a state route running through it making it more accessible than the two others.

The first courthouse, in 1839, was across the street from the current courthouse. It was a two story frame building, 20 feet wide and 30 feet long. As the area grew in population, it soon became apparent that this building was too small.

Courthouse number two was built in 1850 in the public square where the current courthouse is now located. It was 40 by 60 feet, a two story brick building with a large clock tower. Then in 1863 a west wing was added to the building.

The third courthouse, started in 1904, began with a major fight between DeKalb and Sycamore to relocate the county seat to DeKalb. Years of legal battle ended with the courthouse staying in Sycamore and a new beautiful courthouse was built.