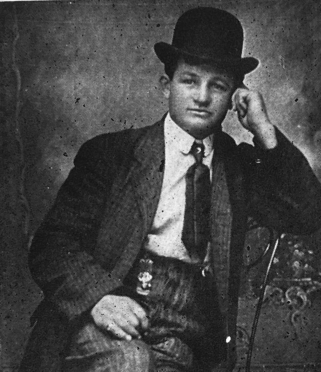 Johnny “Cyclone” Thompson became the pride of DeKalb County in the early 1900s for his boxing ability. His career began as an amateur boxer around 1899, in matches in the back of a room at a bar in the Clare area.

He graduated to more formal boxing at the Stranglers Club gym in Sycamore. From there he was seen by Chicago promotors who arranged a fight for him with a man named Benny Yanger. “Cyclone” Thompson knocked Yanger down four times in three rounds. From this fight, Thompson rose to money making fights.

Only 5 feet 4 inches tall, Johnny Thompson, fought 204 fights as a “lightweight” between 1906 and 1914. His nickname came about because of his ability to unleash a flurry of punches that would render his opponents flat to the mat in a hurry.

He had a very successful career, losing a few, but was never knocked out. When he wasn’t able to meet the lightweight limit of 135 pounds, he moved to the middleweight class.

Johnny’s biggest accomplishment in boxing took place in Sydney, Australia in the 1911-1912 season. During this trip he was scheduled to fight Billy Papke who was the World Champion Middleweight in a 20 round bout. Thompson defeated him on a decision, therefore becoming the World Champion.

“Cyclone” hung up his gloves in 1913 and returned to Sycamore. He served as a Sycamore police officer for four years, being chief for three of those years. He later became a farmer in Mayfield Township. He retired from farming in 1942 and moved to a house on East State Street in Sycamore.

Johnny “Cyclone” Thompson died in 1951, but his legend still lives on in Sycamore history.