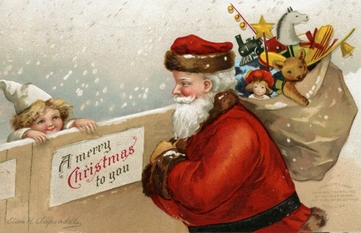 It’s fun to be popular, but at Christmastime it can be very expensive. The tradition of sending out Christmas cards has become a permanent line item in the budgeting process.

This tradition dates back to the mid-1800s when a British man named Sir Henry Cole had so many friends to send greetings to that he couldn’t hand write them all. He created a card showing charity to the poor, which became the first Christmas card. Christmas postcards soon followed.

The early postcards usually had a religious or winter theme. Beautiful scenes of churches with a blanket of snow were common. Postcard etiquette dictated that they were always written in your own handwriting. Messages were personalized based on your relationship with the recipient, and always signed. 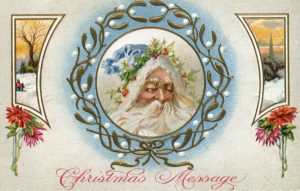 Christmas postcards were at their peak between 1898 and 1918. Many of the early postcards were produced in Germany, where printing methods were considered to be of exceptional quality. But with the onset of World War I, there was a swift decline in the cards imported.

Methods of printing and materials used improved over the years producing postcards on wood, aluminum, and cork, as well as traditional paper stock.

The messages on the early postcards were interesting, usually addressed to “Dear Friends” or “Dear Daughter/Son,” with a short message. Messages such as “Wishing you all the best” were common. 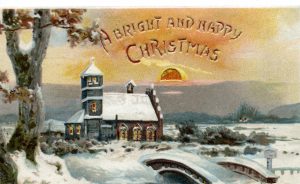 Other postcards read, “Please accept this as a Christmas card – I have run out of cards,” “The pretty Xmas cards were all gone in town,” and “Hope you receive lots of presents” also became the holiday greeting. Included many times in the message were mentions of ailments of a cough or cold.

Christmas postcards have always been a collector’s dream because of their inexpensive price, and remain a popular hobby today.