In its heyday, Electric Park was the entertainment center in the DeKalb/Sycamore area. At Electric Park there was a huge dance pavilion, baseball diamond, a theatre, and other attractions. One such attraction, in 1912, was Bud Mars, the great aviator.

At a Knights of Columbus picnic at Electric Park, it was estimated 2,500 to 5,000 turned out to see the aviator soar above the crowd, landing in a corn field. It was an exciting time for early flights.

Eventually, a more permanent air field was established near Electric Park on the Salkawske Farm. Brothers Joe and Al Salkawske and partner Ed Schoemperlen managed the airport. Along with the air field, there was a flight school to make the venture more financially successful.

The Kishwaukee Airport, Inc. was incorporated in 1945 at Electric Park to operate a flying field, to rent and sell planes and accessories, to conduct a flying school, to do aerial photography and advertising, and to transport passengers and freight by plane. 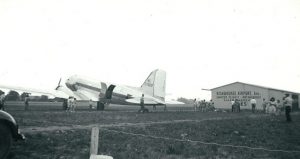 The Kishwaukee Airport opened in 1946. Shown is the hanger and a DC-3 airplane that was on display for viewing in Electric Park at the air field located between DeKalb and Sycamore.

It was located between DeKalb and Sycamore, one-half mile west of Electric Park corners, just west of the current bridge. In 1946 it opened for business. The inaugural flight service for a DC-3 flight to California lifted off July 14, 1946. The flight had a capacity for 21 passengers and a crew of three. In addition to a captain-pilot and a co-pilot, the crew included a hostess who served the meals and refreshments and catered to the needs of the passengers during the flight.

The field at Kishwaukee Airport was designed for light planes used by private flyers, but the field was big enough for the DC-3.

Not everyone was pleased to have the airfield in the area. In 1947, the Sycamore Police Department and Sheriff’s Office received many calls from citizens because a plane was reported at an altitude of 100 feet or less over Sycamore. Two bus drivers who reported the plane said they were ready to jump from the buses when the plane pulled up into the air. 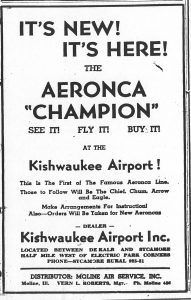 This advertisement, April 19, 1946, promoted a new Aeronca airplane at the Kishwaukee Airport.

In 1950, after some recent heavy rains, a news article in the Daily Chronicle warned, “Don’t attempt to land at Kishwaukee Airport unless you have pontoons on your plane. It’s closed to air traffic because of several acres of water.”

The airport quickly became a popular place. Air races, wing walkers, barnstorming, and spot-landing contests were just some of the entertainment provided by the planes.