Helena Dolder was the kind of woman all little girls want to be when they grow up, a loving wife and mother. Then the unthinkable happened. In 1928 her husband Fred, who was the sheriff of DeKalb County, died.

Helena had worked side by side with her husband carrying out his duties as sheriff. As was customary, Helena and Fred lived at the jail, and Helena was responsible for cooking for the prisoners. The Dolders were given high marks for their ability to efficiently perform the duties of the demanding office, and Helena thoroughly understood her husband’s duties as sheriff better than anyone.

Just days after her husband’s death, friends were petitioning the board of supervisors to have Helena appointed sheriff to fill out Fred’s term. And they did just that. One week later, Helena was appointed sheriff of DeKalb County. 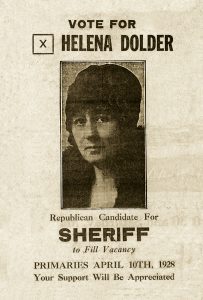 The DeKalb County Jail was called the “Lace Curtain Jail” because of the curtains hung by Sheriff Helena Dolder. After the unexpected death of her husband Fred in 1928, Dolder was appointed DeKalb County Sheriff. Later that year, she ran for the office and won.

According to the Sycamore True Republican on Jan. 18, 1928, Helena’s first day was very eventful.  “Mrs. Dolder took office in Sycamore, Thursday. The same evening there was mush for supper, and it didn’t meet with the approval of the educated appetites of her unwilling guests, mostly from Chicago. The thirty-three rebels, against mush and matriarchal rule, turned down their plates and turned up their noses. So far as Mrs. Dolder was concerned that was all right. They could eat it or not, she said. But she didn’t like it when their disapproval became vocal and started beating their tin plates with their spoons. They shouted louder that they were tired already of petticoat rule and wanted a male sheriff and some meat to eat. Mrs. Dolder went into action. She and her deputies loosened the fire hoses and adjusted the nozzles. In a few minutes, the mush-hating prisoners were being flattened against the wall and soaked by the streams of water.”  The prisoners were returned to their cells, wet, hungry, and defeated. Sheriff Dolder had won.

Sheriff Helena Dolder was re-elected in the fall of 1928 and held the position of sheriff until she retired in 1932. During her term as sheriff she dealt with morphine smuggled in the jail in candy, jailbreaks, Chicago bootleggers, and gambling to name a few things. 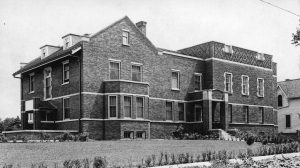 The jail was added to a home where the sheriff resided. The jail was located at Main and Sycamore streets, now the site of the DeKalb County Administration Building.

Known as the “Lace Curtin Jail,” because of the curtains she hung, Sheriff Dolder could be seen with her guns strapped over her print dresses. Helena was definitely someone every little girl could look up to.