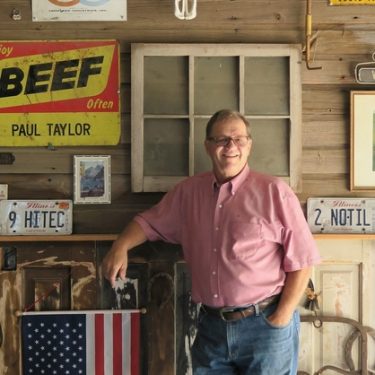 His deep roots in farming coupled with his communication skills and farm organization leadership have provided the platform for his advocacy efforts. As a matter of fact, he’s frequently called upon to tell agriculture’s story.

Paul has testified before Congress and interfaced with legislators, been interviewed by numerous media (including National Geographic), and speaks well from the podium in front of farm groups.

As a spokesman for agriculture, his farm peers have commended him for speaking on their behalf and advocating for farm issues.

“I love to share insights about agriculture,” said Paul, an Esmond farmer. “But it’s because I’ve been given the opportunities and experiences – because of where I’ve been and where I’ve gone.”

Paul Taylor began farming with his brother and father in 1971 while studying production agriculture at Kishwaukee College. Then he transferred to Southern Illinois University earning a bachelor’s degree in general agriculture and eventually a master’s degree in ag economics from the University of Wisconsin-Madison.

In the mid-1970s, he left the home farm and started farming solo in southwest Wisconsin near the state line. Help from his parents was essential during the turbulent ‘70s. At the age of 22 he used his ambition, energy and vision to grow his own farm operation.

He farmed in Wisconsin through the 1980s, returning to the Esmond family farm (established in 1919), after the early deaths of his father and brother.

Paul raises 800 acres of corn and soybeans for the ethanol and seed markets. In the past he also has grown sweet corn, peas and lima beans for Del Monte. And he’s raised cattle and hogs.

About half of his farm acres are family owned and the other half he cash rents in DeKalb and Ogle counties.

He sold 10 acres off to a locally owned hog facility and utilizes the manure as fertilizer for his crops. He also sold three acres to a seed research and plant breeding company and prepares their test plots for them.

Another unique arrangement for the Esmond farmer has been a partnership of sharing equipment with a nearby farmer, Paul Schweitzer. For 15 years they shared a planter and combine and rented farms together. The shared arrangement made for a good transition a few years later when Paul Schweitzer’s son, Mike, returned to the family farm.

Looking back on his farming career, Paul Taylor’s favorite part has been growing crops and making adaptations to “do things better.” He has made farm tech upgrades with GPS-guided farm equipment and improved soil health with conservation practices.

The 2021 crop will be Paul’s last crop as he plans to retire from farming by year’s end. He and his wife, Barb, look forward to taking a break from their farm to travel.

Paul Taylor’s farm organization leadership began as a young farmer in Wisconsin with the county Pork Producers, rising to president. He also served many years on the county Farm Bureau Board and became its top leader.

His farm leadership pinnacle of the 1980’s was his six year term on the Wisconsin Soybean Association Board of Directors with two years as state president. His leadership provided him the opportunity to advocate in Madison and Washington, DC. One of his most notable accomplishments was implementing cooperation of the Corn and Soybean Associations and checkoff programs into a shared office and staff leadership.

During this time, Paul was selected as a participant in the first year of the WK Kellogg Foundation funded Wisconsin Rural Leadership Program. This provided an opportunity to network and experience broader issues in rural America among a diverse group of people, explained Paul.

When Paul returned to his home state of Illinois, he rebuilt the farm operation and began reconnecting with farm groups.

In August, Paul Taylor was one of three Illinois farmers honored as 2021 Master Farmers by Prairie Farmer magazine at the Farm Progress Show. Others included: Kenneth Hartmann of Waterloo and Kent Hodel of Metamora.

Upon receiving the award in Decatur, Paul summarized his gratitude with a quote by Arnold Schwarzenegger: “This country gave me everything. I often tell people not to call me self-made; I prefer to call myself American-made. My success would have been impossible without the principles of the United States and the generosity of Americans.”

The award recognizes exceptional agricultural production skills, commitment to family and service to the community.

At 69 years, Paul reflects on this lifetime achievement award in agriculture and says, “I’ve been blessed.”

“It’s humbling and I’m honored to be recognized,” said Paul. “My parents would be proud – they offered support and encouragement.”

Paul joins an elite group of 23 farmers from DeKalb County who have the distinction of Master Farmer (see list) since 1970.