By now farmers are usually scouting their growing crops. In early June, farmers were still struggling to get crops planted due to unrelenting rainfall.

The number of acres of corn and soybeans not yet planted is unprecedented. Only about 15% of corn had been planted by June 1st in DeKalb County. Typically, farmers have finished planting corn and soybeans by mid-to-late May. 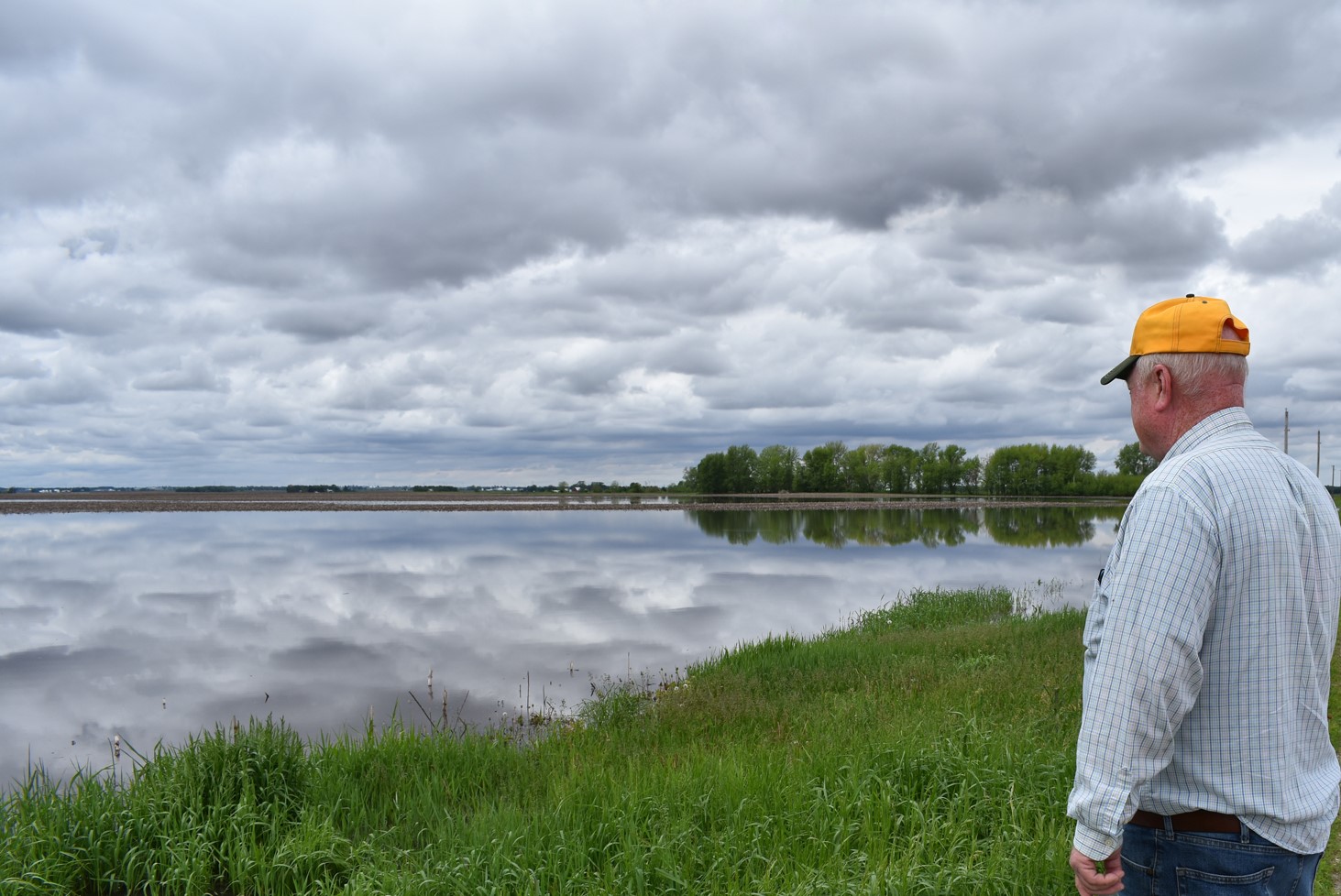 Flooded Fields. In southern DeKalb County, some farm fields were flooded after having received excessive rainfall in May including 5-6 inches after Memorial Day. Somonauk farmer Mark Tuttle looks at a flooded field near his farm.

“We’ve never seen a year like this before,” said Mark Tuttle, Somonauk farmer, who hadn’t planted anything as of last week. “When farmers aren’t producing it’s going to have a detrimental effect on everyone.” He’s concerned about the “collateral damage” to agribusinesses and the entire economy because of unplanted crops and a potential shortfall of corn and soybeans.

DeKalb County isn’t the only area being impacted by wet weather. In Illinois, only 45% of the corn crop had been planted and 21% of soybeans by June 2. Nationwide, crop acres lagged behind for the same period with one-third of the corn crop unplanted.

“We are in uncharted waters, along with the rest of the Corn Belt,” said Tuttle. “Record rainfall has led to flooded fields and historic delays in planting.” May turned out to be the wettest month on record.

Besides corn and soybeans, Tuttle grows peas and sweet corn for Del Monte and seed beans for Bayer.  He’s hoping he can get at least the seed soybeans and sweet corn planted and fulfill his crop contracts this month.

Somonauk farmer Brian Miller, also plants sweet corn for Del Monte. He anticipates he can still get the sweet corn planted as well as field corn and soybeans. Even though rainfall has set him back, he was able to plant some corn in April and May. 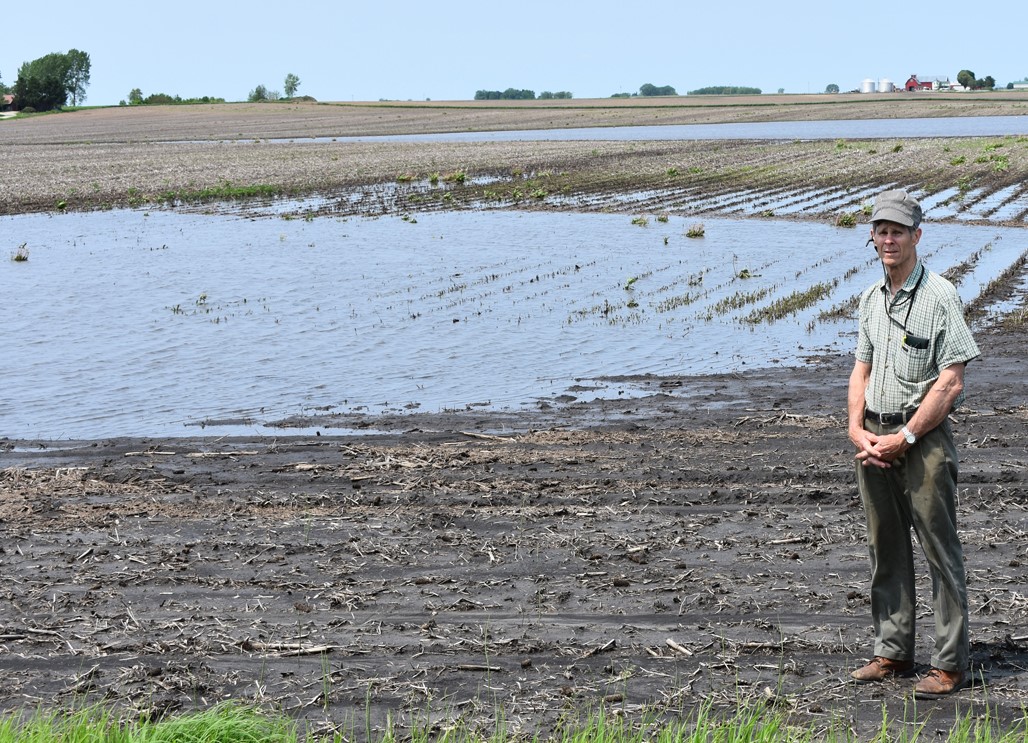 Water Ponds. Already saturated fields were met with more rainfall causing ponds of water in farm fields in late May. Brian Miller was waiting for his Somonauk farm field to dry so he could resume planting.

“The last week in May we had six inches of rainfall,” explained Miller. “It was at a time when fields were already saturated from previous rainfall.” He was waiting for fields to dry so he could resume planting.

Miller isn’t sure what to make of this year. In the 40 years he’s been farming he hasn’t seen a planting year like this one. “We have more serious unknowns today than we had years ago. Politics, tariffs, lower farm income, and weather.”

“Yet, farmers are resilient and tend to find ways to do what we can. Crop insurance will help with financial risk this year,” said Miller.

Jeff Paulsen, a Clare farmer, says he’s always carried crop insurance for that added protection. “It’s not my plan to use it, but when you need it, it’s there.”

Paulsen farms in the northern part of the county and was fortunate to get most of his corn planted but was waiting for dryer soils to plant soybeans. He planted corn two days in late April, then two days in mid-May, and then four hours on Memorial Day. 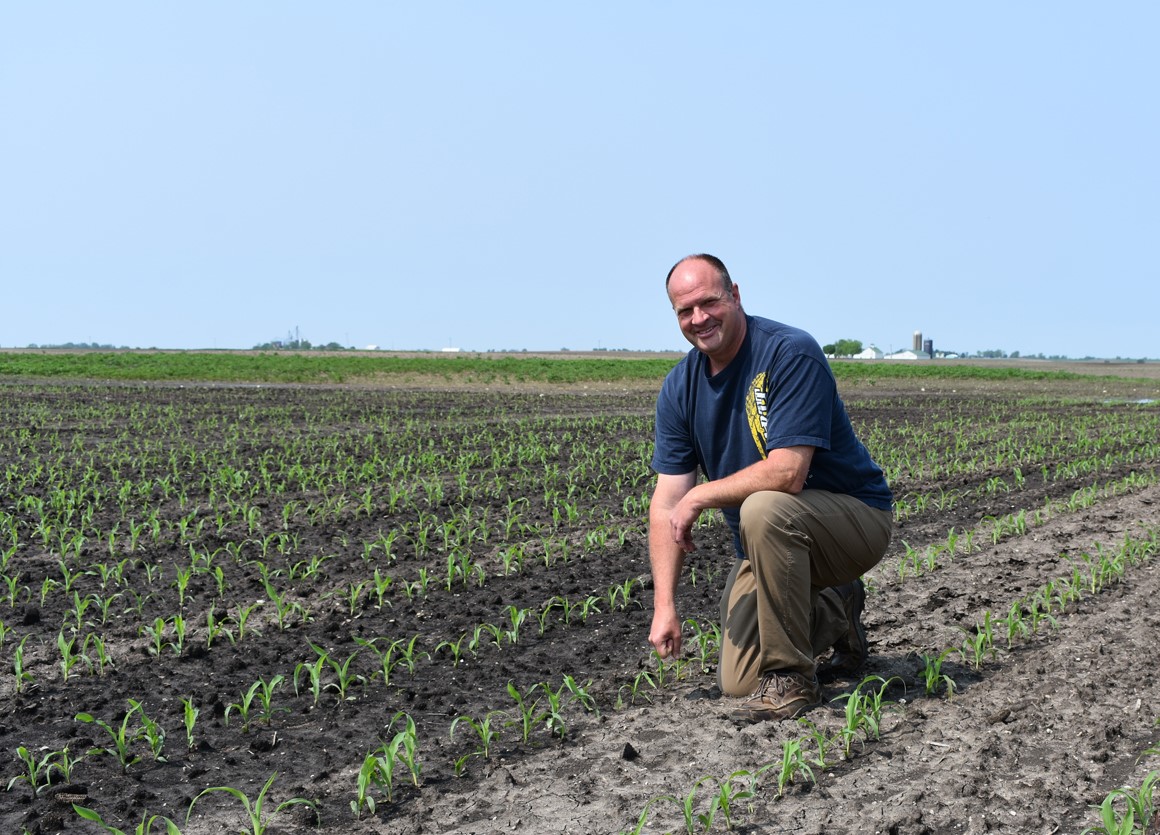 Some Corn Growing. In northern DeKalb County, farmers like Jeff Paulsen had small windows to plant some corn in April and May in between showers of rain. This corn field near Clare was planted April 24 in less than ideal conditions but appears to be in good shape.

“It’s not ideal conditions, but this year you can’t wait an extra day for fields to be ideal,” said Paulsen. “We were rained out for three weeks!” His rain gauge showed a total of 10 inches of rainfall from mid-April through May.

“As farmers, we’re all in the same boat. Some will have to paddle harder than others,” Paulsen said.

Farmers like Paulsen, Miller, Tuttle and others keep an eye on the sky and wait for field conditions to allow them to resume planting. Most farmers have switched to shorter season corn hybrids or changed to growing soybeans instead of corn based on the planting date.

Farmers have to make some tough decisions whether they can plant or not based on field conditions, the calendar date, and crop insurance dates. If they are unable to plant, they will opt out with the prevented planting option, which provides some federal insurance compensation. Economists predict that prevented planting will be at the highest level ever in Illinois this year.