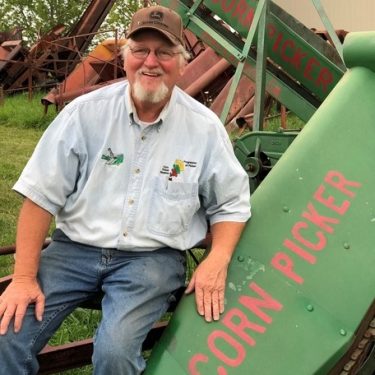 Most know Bob Johnson as Corn Picker Bob. He comes by that nickname naturally having an extensive collection of vintage corn pickers and a book.

Bob has been collecting corn pickers for nearly three decades. His interest in the antiquated farm machines started at an auction where he spotted a John Deere 200 picker similar to the one that his father once had. In a closer look, it had a Huntley farm store sticker on it from the 1950s. And, the pull-type picker had both a hydraulic and a hand lift. He just knew it had to have been his father’s corn picker.

“I didn’t buy it at the auction, but later I bought it from the farmer who had purchased it,” said Bob. “I got Dad’s picker back and that’s what got me started collecting them.”

Corn Picker Bob reflected, “Hearing the stories of picking corn by hand and later how much my dad enjoyed the corn picker was what kept going through my mind.” 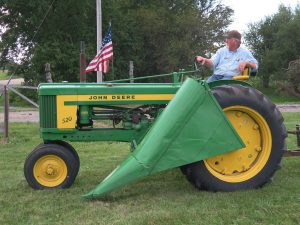 Bob Johnson demonstrates the use of one-row corn pickers at historical days. He also collects attachments, like this John Deere stalk lifter, mounted on the side of his tractor.

His father, the late Verner Johnson, picked field corn by hand in the 1930s. He would hand-pick one acre of ear corn per day. When his father bought a mechanized corn picker he was able to harvest 16 to 18 acres daily in 1950. The new pull-type machine picked ears of corn AND removed the husk streamlining a farmer’s harvest.

“My father told me, ‘I lived a good life. I farmed with horses, picked corn by hand and look at where we are now in farming,’” Bob reminisced. “My dad didn’t mind picking corn by hand but he sure liked his new corn picker.” ►

During his father’s farming years he had a Case picker and then John Deere pickers. His corn picker was replaced by a combine in the 1960s, which not only picked the corn but shelled it too.

Bob has 25 antique corn pickers in his collection. He owns most all of the major machinery company names like John Deere, Case IH, Oliver, Allis Chalmers, New Idea, McCormick, and Massey-Harris. He also collects what he refers to as “odd balls” like the Corn Belt, Blackhawk, and David Bradley. Most are pull-type pickers, circa 1930s to 1960s. His favorites are the John Deere 200, of course, and the Great American picker.

He finds pickers at auctions, in advertisements, and collectors contact him. “They come to me and want me to buy their picker. I guess that’s why they call me Corn Picker Bob.” 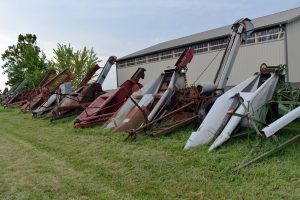 Pickers are lined up on the Johnson Farm, northeast of Sycamore. Bob Johnson has 25 pickers in his collection.

Part of the collector experience for Bob is restoring pickers into working machines. He orders parts from various sources, including Ebay, and follows the old owner/operator manuals to repair them. “Restoring pickers involves freeing everything up. It gets bound up so I take the chains off, use penetrating oil, put the chains back on and get the parts moving again,” explained Bob. ►

Bob uses a John Deere 300 2-row pull-type picker to harvest ear corn from his fields. He then bags the corn and sells it as squirrel corn to a local store. He also operates a JD 127 one-row mounted picker to demonstrate their use at historical days such as the Half Century of Progress in Rantoul and at the Bos Brothers historic farm in Geneseo. Additionally, he has hosted picking demonstrations at his farm located northeast of Sycamore.

Corn Picker Bob had accumulated years of literature relating to the picker machines. He decided it was time to do something with it. Along with his wife, Phyllis, they both wanted to preserve this farm history.

“Everyone wanted information and we wanted to share it with them,” said Phyllis. “Many remember their grandpa’s picker and they wanted to know more.”

Phyllis, a writer, was determined to develop a book about the history of corn pickers with Bob’s help. They spent two years researching and writing the book: “Corn Pickers and The Inventors Who Dreamed Them Up.”

The book features chapters about each of the major manufacturing companies of corn huskers; early inventors; several illustrations of patents; photos from farm families, archives and historical societies; chapters on farmers helping farmers pick corn; corn picker contests; and just about everything else you want to know about corn pickers from 1850 to 1970. 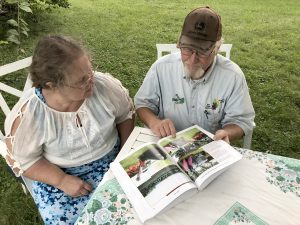 Phyllis and Bob Johnson worked on their “Corn Pickers” book for two years. They have sold over 500 copies of their attractive and informative book.

The “Corn Pickers” book traces the evolution of the picker powered by horses and then tractors. It contains compilations of newspaper and newsletter articles that frame the importance of this mechanization in agriculture. The book also has notes from Bob and Phyllis that add personalization to the chapters.

The book was completed and printed in August 2017 with over 800 pages and 1,500 photos. In the first printing, they had 125 copies made which they took to the Half Century of Progress Show. They weren’t quite sure how many they would sell. At that show, they sold out! They are now in their fourth printing of books, having sold over 500 copies.

Bob claims book sales increased based on the forward in the book written by radio broadcaster Max Armstrong. Max became friends with Bob at one of the Heritage Tractor Adventures several years ago. The two struck up a conversation about their interest in corn pickers – both of them had John Deere 200 pickers – and before long Max was calling him Corn Picker Bob.

Another boost for the Johnsons was a promotion of their book in the Green Magazine for John Deere enthusiasts. More recently they have been featured in Illinois Farm Bureau’s FarmWeek newspaper – the Johnsons are DeKalb County Farm Bureau members – and Illinois AgriNews newspaper.

The “Corn Picker” book is available to purchase online at: www.cornpickerbook.com for $135.

Their next book venture is already in the works. Bob and Phyllis are planning to publish a photo book on corn cribs. They have taken hundreds of pictures of corn cribs in their travels and have done extensive research on these farm structures.

Bob says he plans to maintain and perhaps add to his picker collection. Phyllis likes to collect walking plows – she has 30.

Locals who know Corn Picker Bob also know him as Mailman Bob, their rural mail carrier in Sycamore. He’s delivered his book to some on his route and the CONNECTIONS magazine too. And finally, there’s Farmer Bob who appreciates his farm roots and heritage. 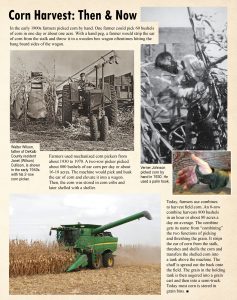